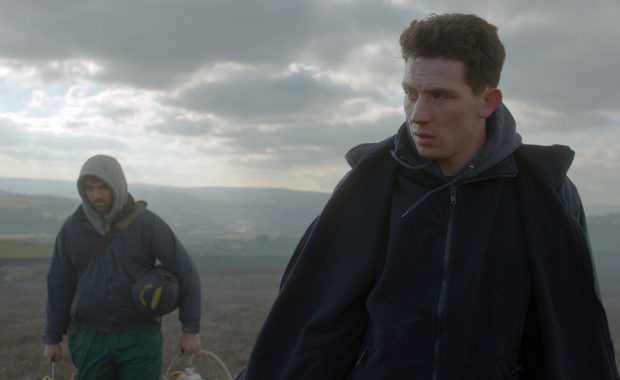 Francis Lee’s God’s Own Country is one of the most impressive British debuts of the past few years. It charts the passionate affair between young Yorkshire farmer Johnny (Josh O’Connor) and Romanian migrant worker Gheorghe (Alec Secăreanu), making incredible use of an inherently dramatic, rain-drenched rural landscape. I caught up with Lee shortly after the film’s rapturously-received Berlinale premiere.

How autobiographical is the film?

Well I grew up on a sheep farm in Yorkshire, and my dad is still a sheep farmer, on the hill where the film was shot. So all the elements to do with the farm, the landscape, the nature – they’re all very much autobiographical, in terms of how I saw that world and how it made me feel. The specifics of the story are not autobiographical, but it’s about falling in love, probably for the first time, which I of course have experienced! I wanted to explore how difficult being in love can be, and how difficult making yourself vulnerable to someone can be.

The sex scenes are integral to our understanding of the characters, particularly Johnny…

Johnny only knows how to respond to people sexually – at first he can’t respond to Gheorghe in any other way, and this builds and builds, and he doesn’t know what to do with this energy. I wanted it to feel very physical, very connected to the land and to the landscape. Johnny’s sexual energy at the start of the film is very aggressive and animalistic. And what was very important for me was to show that when he progresses within that relationship, the kind of sex he has changes, and it changes him.

Most of the obstacles Johnny faces are self-imposed, in contrast to the countless other films where gay characters have to contend with homophobia.

I knew I didn’t want to tell a story about sexuality or coming out. I feel that my sexuality is probably the least interesting thing about me, and I haven’t really had to deal with homophobia. Queer films are often very issue-based, and gay characters are often prevented from being together by society, and there’s a certain sadness or loneliness about them. I knew I didn’t want to tell that story because that’s not my experience.

Was the depiction of the xenophobia Gheorghe experiences informed by the fact that you were shooting in the lead-up to Brexit?

The idea for Gheorghe actually came from when I gave up being an actor – I knew I wanted to make films and I didn’t have any money, so I got a job in a scrapyard. One of the guys I was working with had come to the UK from Romania to better his life, and I was shocked and ashamed by how people treated him. I wanted to look at what it felt like as an outsider – to come full of hope and wanting to change your life, and being met with this terrible negativity and racism.

How did you build trust with your actors?

I started working with Josh and Alec about three months before we started to shoot. I like detail and precision, so we started building the characters from the moment they were born, and we charted them in great deal right up to the moment we meet them in the film. When it came to filming, having once been an actor myself, it was about making sure they were protected in every single moment, so that they felt they could be vulnerable on screen. I surrounded them with people who I knew would work very sensitively around them.

Well I worked with Mike as an actor in Topsy-Turvy. He’s incredibly detailed when it comes to building character, and I loved working that way. It makes you feel very safe, and it makes you able to work very quickly. In this film we just worked and worked on the characters, so that by the time we’d come to do a scene, we knew immediately how they’d respond to any given situation. The big difference between how we worked and how Mike works is that I don’t like improvised dialogue at all. So the dialogue was very carefully written, and they weren’t allowed to deviate from the script.

And you shot the film chronologically?

It was very hard to achieve, but for me it was very important for the story. It was all about building these layers of emotion. It was incredibly good for the performances, but not so good for the poor people working in production design!

The weather plays a huge role here – did you wait around for specific conditions?

Not at all, we just shot whatever was going on. The worst thing about the weather in Yorkshire in spring is not that it’s bad, it’s that it’s so inconsistent. In the morning you might have snow, by lunchtime bright sunshine, in the afternoon it would be windy and cloudy, and then it would hail! That was very tough from a continuity standpoint, but working chronologically meant that we could contain that to an extent.

Would you say the film is informed by your own experience of growing up gay in a conservative community?

I would never describe it as a conservative community. In my experience sexuality is irrelevant, and in the film it’s much more important to Johnny’s family that he works. They don’t really care who he has sex with, as long as he’s there and he’s working – if he doesn’t, the farm is finished. And when they work out that he’s happier, and he’s not being a pain in the arse, and he’s doing the work, then they’re really able to get behind him and support the relationship.

Most commercially successful films about gay men are quite coy when it comes to depicting sex – were you ever concerned that your frank approach might affect your box office prospects?

Well because the sex informs us about where Johnny’s at psychologically, I couldn’t think of another way of doing it that would be truthful. Whether or not that makes it more or less commercial I’m not sure. In my experience so far from public audiences, which have been very diverse in terms of gender, age, race and sexuality, the sex doesn’t seem to have been an issue. People have just responded to the emotion of the love story. I think it’s an incredible time for queer stories – there are suddenly all these films that seem to be playing to a much broader audience.