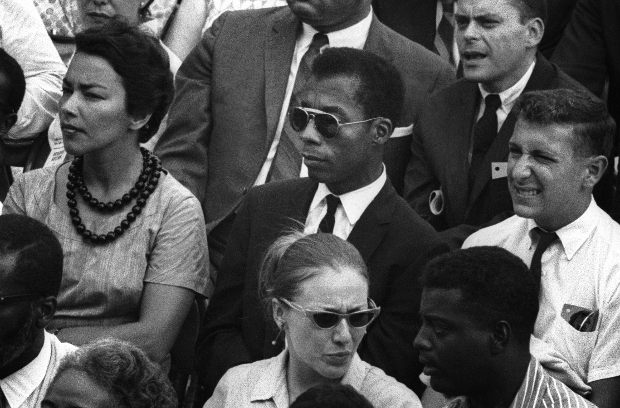 When asked during this year’s press conference whether the 67th edition of the most politically-minded of film festivals would respond to recent events (i.e. the unavoidable fact that a hate-peddling, leather-faced demagogue has not only become Cockwomble The First the 45th President of the United States, but also widened the American racial divide), Berlinale head honcho Dieter Kosslick replied that not being active is its own form of protest. He added that the overall range of the programme was statement enough.

A neat little parry but in his defence, it’s undeniable that some films do speak for themselves: Sally Potter’s gently mordant satire The Party and Aki Kaurismäki’s fantastic The Other Side of Hope spring to mind. Now add to the list the Oscar-nominated documentary I Am Not Your Negro, which could have been a Competition standout had it not been for its Toronto festival premiere.

Now, I’m sure there’ll be some of you rolling your eyes, thinking you’ve had it up to your eyeballs with all things American right now. You go to the cinema to escape the world outside it, not to be reminded of its ills.

I hear you, sunshine, but I Am Not Your Negro is different: it’s a concise piece of work that articulately distils a complex issue, one that reminds us that cinematic escapism takes many forms. In taking the words of the late James Baldwin, a prominent black activist who wanted the lives of Malcolm X, Martin Luther King Jr and Medgar Evers “to bang up against each other”, and lacing his prose with archival footage and modern clips, director Raoul Peck has created a unique documentary. He and his editor Alexandra Strauss have assembled a non-lecturing chronicle of black activism during the civil rights movement, which comes to life through the quieter, older-sounding baritone of Samuel L Jackson.

Neither Baldwin nor Peck could have predicted Trump’s ascension to the White House, but rarely has a film written in the past, largely focusing on the more distant past, found such urgency in the present. Chronology is often thrown out of the window and the construction of the documentary reinforces the timeless and often prophetic quality of the Baldwin’s prose; it is juxtaposed with 1950s and 1960s newsreel footage, the Obama inauguration and the Ferguson protests. Strongest of all, however, is that Peck is clearly a cinephile and uses a great number of film clips – from King Kong to Stagecoach, Guess Who’s Coming To Dinner to The Defiant Ones – in order to create a fascinating correlation between the history of cinema and America’s race and class struggle. The director mirrors Baldwin’s views and shows how the image projected by the cultural exports of Hollywood clashed with social realities, and in some cases how the self-perpetuating fantasy of American life seen on the big and small screens reflected the “moral apathy, the death of the heart” that Baldwin saw happening in his country. Hollywood here is essentially the eagle wounded by an arrow.

Stylish and edited to perfection, I Am Not Your Negro stands alongside El Pacto De Adriana as one of the must-see documentaries of this year’s Panorama selection, and one of the 67th edition’s unmissable offerings. Still, if I lost you earlier on and you’re still hankering for carefree escapism, perhaps a solid thriller to pass the time, here’s a piece of advice: resist the temptation to see Cate Shortland’s third feature.

The Australian director – of Somersault fame – has adapted the debut novel by Melanie Joosten and ended up with a forgettable psychodrama that plays out like the zenith of Liam Neeson’s worst fatherly fears. Berlin Syndrome follows Aussie backpacker Clare (Kristen Stewart-reminiscent Teresa Palmer) who arrives in Berlin in order to take some snaps of Kreuzberg and buy some old projector slides. Following a meet-cute and saucy hook-up with Berliner Andi (Max Riemelt of Sense8), her trip takes a distinctively sinister turn as she ends up trapped in his secluded flat. What starts off as a familiar but atmospheric captivity chiller soon devolves into a baggy, sub-par John Fowles psychodrama. It’s a shame, as there is an excellently shot sex scene, some appropriately icky realism, and a few interesting attempts to inject some psychological complexity. The Stockholm Syndrome-referencing title, referring to the emotional co-dependence that can arise between captor and captive (for the heathens amongst you who didn’t suss out what Beauty And The Beast was really about), promises more than it can deliver.

The screenplay doesn’t help things one bit, as it shows a disappointing readiness to fall back on formulaic, logic-defying suspension of disbelief, as well as offering Andi the emotional definition of a Lego brick. Usually, keeping a nefarious character shrouded in mystery galvanizes the devilish bastardry; here, we are drip-fed some characterization that limits itself to a garden variety Freudian psychoanalyst’s wet dream. The character of Clare fares better, but despite Palmer’s strong central turn and Shortland’s best intentions, Berlin Syndrome fails to bring anything new to the table, unlike inventive and creepy captivity films like J Blackeson’s underappreciated The Disappearance of Alice Creed, last year’s far less bloated 10 Cloverfield Lane or M. Night Shyamalan’s recently released Split.

Do yourself a favour: whether you think you’re in the mood or not, seek out I Am Not Your Negro. No one is comparing it to Berlin Syndrome or any other genre movies, but it remains important escapism, and packs a far stronger punch than any thriller you’re likely to see in a while.