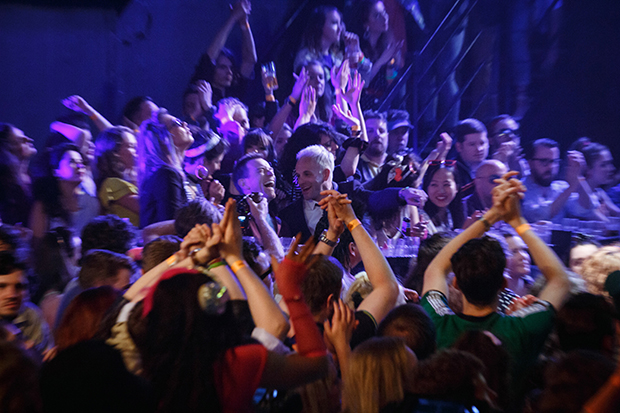 Choose a double-bill of two belated sequels courtesy of two national treasures, with only one of them acting as an official follow-up.

Choose to watch Danny Boyle’s follow-up to his cult 1996 film, which screens in the Out Of Competition selection. Indeed, the annoyingly titled T2 Trainspotting (that prefix belongs to James Cameron and has no business here) hits European theatres very soon and sees our favourite Edinburgh junkies return after 21 years of absence. Loosely based on Irvine Welsh’s novel Porno, T2 sees reformed Renton (Ewan McGregor) return to his old stomping ground, having fled for Amsterdam after screwing over his compadres all those years ago. He meets up with Spud (Ewan Bremner, who delivers the film’s most touching moments as a cypher for Welsh), rekindles his love-hate bromance with Sick Boy (Johnny Lee Miller) and tries to avoid the batshit crazy and vengeful Begbie (Robert Carlyle, still entertainingly unhinged and sporting a greying pornstache) who soon breaks out of the slammer just in time for the homecoming…

Let’s address the scagged elephant in the room: to paraphrase the original, T2 has got a great fucking personality, and no, it will not have the same legacy as its Cool Britannia emblematic predecessor. While everyone feared that Boyle was going to cash in with a foolish sequel and pander to nostalgic crowds, the director outsmarted the sceptical majority by not only acknowledging that times have changed but actually making T2 about the dangers of living in the past and how nostalgia can itself be a drug. Nowhere is this clearer than during a sly fourth wall-breaking line aimed at Renton but really directed at the audience: “Nostalgia: that’s why you’re here. You’re a tourist in your own youth.” The film references the original head-on (as well as Boyle’s first feature Shallow Grave at one point), and while it fails to capture the same zeitgeist-seizing oomph that its predecessor did, it was never aiming to. It chooses to be a surprisingly poignant portrait of middle-aged life, an ode to taking stock and wondering where your lust for life evaporated to; how your old highs are gradually replaced by delusions after you walk towards the camera, deciding to “choose life”.

John Hodge‘s screenplay is solid, especially when dealing with the theme of ageing and the multifaceted nature of memories. Crucially, it doesn’t betray the memory of the characters. As if that wasn’t enough, it’s really funny, dropping the requisite amount of C-bombs and allowing Boyle to showcase once more why he is one of the most inventive British directors around. T2 was one hell of a gamble and he’s delivered a grown-up second chapter that boasts another carefully curated soundtrack and packs a reflective punch.

As the opening of this blog stated, T2 isn’t the only belated sequel on show at the Berlinale, even if Michael Winterbottom’s On The Road is more of a spiritual follow-up than an actual Part 2…

The prolific British director has chosen for his latest project to construct a rockumentary of sorts, one which feels like the unofficial and significantly less slutty cousin to 2004’s 9 Songs. While the latter was an erotic-cum-musical odyssey, where music was the soundtrack to fucking, On The Road sees music as the soundtrack to a fictional romance woven within the fly-on-the-wall documentary realism. The camera follows young London indie rockers Wolf Alice (who, as fate would have it, feature on the T2 soundtrack) and their roadies as they travel from city to city; we observe the unglamorous realities of touring life and the routine responsibilities of the crew. In the periphery of all the soundchecks and press junkets is a burgeoning relationship between the band’s new management rep (Leah Harvey, who exudes some Naomie Harris-like charm) and a grizzled roadie (James McArdle), whose mum happens to be played by a cameo-ing Shirley Henderson.

Isn’t that another neat T2-shaped coincidence?

For fans of Wolf Alice, it’s Christmas; for the uninitiated, On The Road is the chance to discover a talented new band, who do pale personality-wise in comparison with their far more entertaining supporting acts. The docu-hybrid will leave several pining for the return of 9 Songs’ explicit shagging, and lead some to bemoan the lack of a purposeful narrative; others will get swept up in what feels like an authentic tableau of touring and unresolved relationships. Either way, there’s no denying that the director and his frequent cinematographer James Clarke effectively bottle the spirit of gigging and gig-going. After 24 Hour Party People and the aforementioned 9 Songs, it’s a joy to see Winterbottom show once more how deftly he films live music, whether it’s from the mosh pit or the stage, and that’s no small feat.

What else is there for me to say, except:

Choose to trust this reviewer.

Choose getting the band back together and going on tour.

Choose T2 and On The Road.