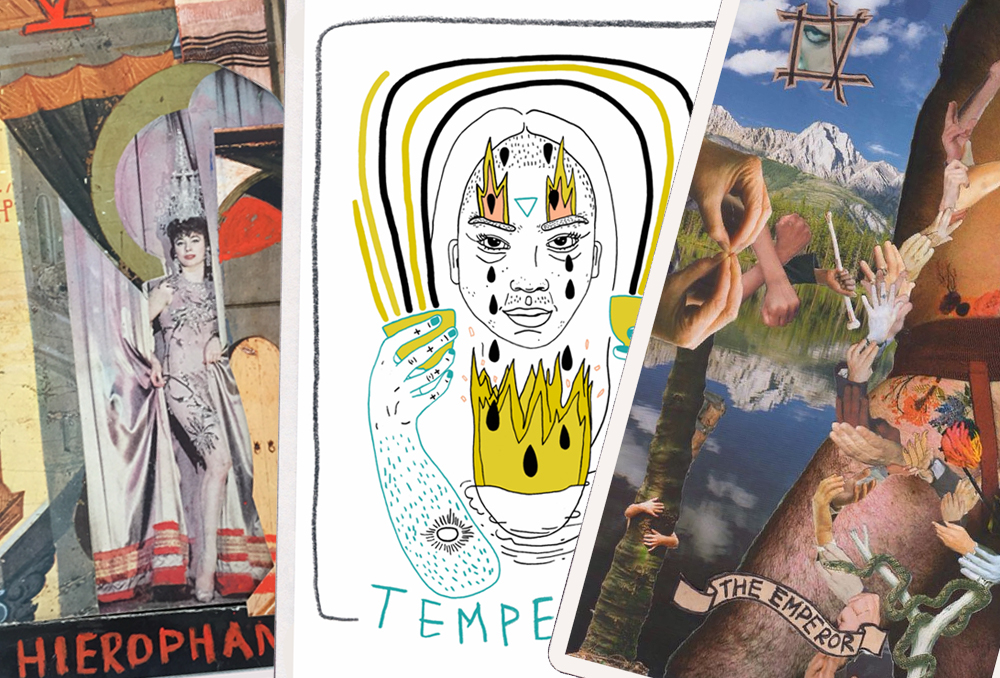 Are you ready for our “Return of the occult” issue just about to hit newsstands? Just to whet your esoteric appetite a bit more, we found one writer who’s fashioning her own magic… and you can help! Berlin-based writer Jane Flett’s upcoming book Fool’s Journey interprets the tarot in a way only the literary punk could: with a poem for each of the 22 “Major Arcana” cards of the tarot deck and accompanying illustrations from friends. Her crowdfunding campaign to get the book out is on through December 13.

June 24, 2016. Just one day before, the UK had voted to leave the EU. Aberdeen-born Jane Flett, like many Berliners with British passports, needed cheering up; she and a group of friends decided to spend the day drinking with the devil – at Teufelsee. “Our thinking was: everything’s horrible, let’s drink champagne,” she remembers. But somewhere in the long grass of the lakeside, the devil was waiting and a tick attached itself to her, digging into her skin in order to drink her blood. In her own words, Flett’s relationship with tarot began because: “I was bitten by a fucking Brexit tick.”

Eventually diagnosed with Lyme disease, it was in the “weird spacey time”, when the symptoms were still a mystery, that she began reading tarot. An ex had left a deck of tarot cards at her house; she found it and began drawing a card each day, looking up interpretations of the cards online. Despite the at-times dark meanings of the cards, she discovered a newfound sense of freedom from her illness in the process. “At first I felt like I was just getting the asshole cards – the ones that are like: ‘Everything’s terrible!’ And that’s not comforting in itself – but you realise, if you keep drawing cards, eventually another card will come up. This was a reminder that movement and change is possible and inevitable.”

The idea to make a whole new tarot deck, and an accompanying book of new poetry, came to her during a residency at Montserrat in Spain after another performance over a Halloween that same year saw her read poems she’d already written to specific tarot cards. The outer landscape of Montserrat is every bit as surreal as the inner landscape her Lyme Disease symptoms had conjured up. “The mountains are these weird fingers of stone. I would be really foolish – walk up just in a little sundress, not taking my phone, freaking myself out that I’d be killed by a wild boar. The landscape made me quite grandiose and I thought, I’ll make a whole tarot deck…”

She began contacting artist friends in Berlin in order to commission the cards. “All of the artists are queer, non-binary or female. That wasn’t something I chose at first – it reflects the community I’m in, but once I saw it was happening I just kept it going. I saw it as an opportunity to give a platform to those voices.”

This also gave her a chance to re-imagine the tarot deck along queerer lines, moving away from its gendered archetypes to a more transgressive aesthetic. “Our version of the Emperor, for example, is a gay Daddy-fetish poem. Because the Emperor is a lot about rules and structure, and yes there are the rules and structure of patriarchy, but there are also rules and codes that queer cultures use: like using secret codes to show your sexuality in contexts where being queer puts you in danger.” Alexander Highet’s beautiful illustration for the card shows a collage of held hands and hairy-legs – suggesting at once a fetishistic love of hairy flesh and a collective of hands held in solidarity – while the accompanying poem references the “hanky code”, a visual code using colour handkerchiefs to show sexual preferences, developed by gay men in the 1970s.

So does Flett believe in the mystical power of Tarot, or is this just an aesthetic device? The answer is a little of both. “They aren’t just pretty symbols – there’s a power, a serendipity. But it’s more a way of seeing your internal options. There’s no external authority involved. I don’t believe in external authority.”

Whatever the case is for Flett, there’s truth in the beauty of her tarot cards and the texts that go with them. Only a fool would tempt fate and not check out Fool’s Journey. But in order to make sure she can make the best journey she can, be sure to support her IndieGoGo campaign by December 13.

Donate to or pre-order Jane Flett’s Fool’s Journey at igg.me/at/foolsjourneybook