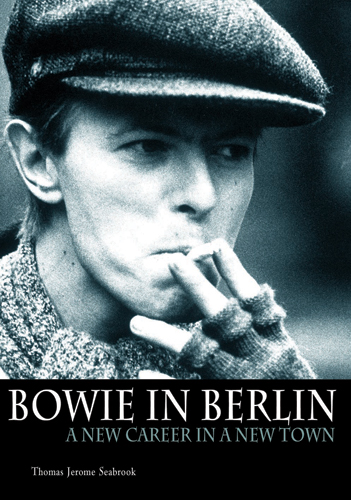 Even 35 years after he left Berlin to reboard the spaceship to global stardom, David Bowie continues to inspire volumes of new writing. We talked to four authors whose books come to grips with the glam rocker’s “golden years”.

Seabrook’s definitive book on Bowie’s three-year expat stint delves into why the musician fled from fame in LA to comparative anonymity in Berlin. It offers insight into Bowie’s recording process and, as Seabrook says, goes beyond Bowie’s image “as a cardboard glam rock character with red hair and slightly throwaway songs. His Berlin records are the complete antithesis of that.”

I was named after his character in The Man Who Fell to Earth. So you could say I was destined to write this book.

We never met, but Bowie and his music have always been part of my life. I was named after his character [Thomas Jerome Newton] in The Man Who Fell to Earth. So you could say I was destined to write this book, if you believe in that sort of thing. I first got into him as a teenager, at a time when his music was probably as unfashionable as it’s ever been. I was mostly listening to hairy American bands at the time, but something made me want to borrow a cassette best-of from my local library, and then I realised I knew most of the songs on it already.

“Heroes”. Much as I love Low, “Heroes” pushes the ideas on it quite a bit further. Bowie, Eno, and co are very much in the groove; the sound is broader and more confident, and it’s got some of Bowie’s best songs on it – also things like “Beauty and the Beast” and “Blackout”. It’s also much more of a Berlin album, both in a literal sense (it’s the only one of the supposed trilogy that was entirely made there) and in the way it feels.

The one that starts the book: Bowie and Iggy driving around Berlin, probably out of their minds on god knows what, spotting a car owned by some drug dealer they knew, and deciding it would be a good idea to ram their Mercedes into it, over and over again. This episode ended up inspiring one of his greatest songs of the period – “Always Crashing in the Same Car”. And it kind of sums up the brilliant irony of Bowie’s madcap scheme to go to Berlin – the drug capital of Western Europe – to get cleaned up.

A book aiming to grasp the unique aura of Berlin through portraits of the memorable people who inhabited it couldn’t do without a very special chapter about Bowie – especially when its author personally spent time with the star while working on the set of Just a Gigolo.

In 1977-78 I was the assistant director on Just a Gigolo, the derivative and disappointing feature film starring Bowie and Marlene Dietrich. Bowie, his assistant, the director David Hemmings and I were the only native English speakers on the picture, hence we naturally gravitated toward each other.

We all spent many evenings together in his Hauptstraße apartment. Bowie played records for us, explaining how musicians come together then break up in the pursuit of creative goals, likening the process to Die Brücke artists earlier in the century: Roxy Music and Brian Eno, Der Blaue Reiter and Kandinsky.

I’d heard the gossip about him before we met of course, the stories of a paranoid, egotistical Thin White Duke who flirted with fascism and the occult. But over the months that we worked together I saw only a gentle, articulate, warm and affable man, filled with self-effacing good humour, on the cusp of finding his own true self.

Over the three-month shooting schedule he danced with Maria Schell, woke up in bed with Kim Novak and – on day 51 – was shot by a nutty Nazi. With blanks. Early one morning, after the director and I had spent the night reworking dialogue, I knocked on his trailer door and delivered a wad of new lines for him to memorise. Bowie scanned the list, smiled weakly and said: “Now, melody I can handle…”

“Heroes”. Because it’s fired with deep emotion. Because it captures a sense of the isolation and aching loneliness of the then-divided city. Because it tells us, all the fat-skinny people, all the nobody people who then dreamt of a new world of equals, that there was hope, and that we could be ourselves.

I followed him downstairs to the huge, ceramic lavatory where – as we stood before the urinals – we sang Buddy Holly songs together…

The memory that endures most from those days was Christmas together: Bowie and my boss, with partners, children and add-ons like me at a secluded restaurant in the Grunewald, Forsthaus Paulsborn. We drank too much and Bowie gave me a copy of Fritz Lang’s biography. At the end of the happy evening I followed him downstairs to the huge, ceramic lavatory where – as we stood before the urinals – we sang Buddy Holly songs together (or, at least, a line-and-a-half from Little Richard’s “Good Golly, Miss Molly”).

From Iggy Pop to Romy Haag, from Die Brücke to krautrock and from Low to Lodger, German journalist Rüther follows Bowie on the Berlin trail. Originally conceived in 2006 as an article in honour of the 30th anniversary of Bowie’s move to Berlin, it will be available in English translation this autumn from Reaktion Books.

I’m not a fan. I do like a lot of Bowie’s work, but not all of it. I always admired that he wanted pop music to be more than melodies. This intellectual ambition he had. And I like that he never trusted authenticity in pop. He’s never been a sweaty rock ‘n’ roller. For him it was always about the possibility of becoming someone else for the duration of a song. What a wonderful thing that there’s another life waiting for you in a song! Over and over and over again.

Your favourite of Bowie’s Berlin work?

My personal favourite would be “Moss Garden”, an ambient instrumental from the second side of “Heroes”. It’s so quiet and beautiful and simple. For some reason it sounds like spring to me.

I love that he liked to use public transportation. People told me he was quite a fan of the BVG, which is somewhat hard to believe if you live in Berlin nowadays. But it seems to be true – there was an old S-Bahn map in his exhibition at the V&A. He obviously archived it!

A unique discovery you made while writing/researching your book?

I found the parallels between Bowie and West Berlin striking. Both the divided city and the artist were at a loss what to do next in the mid-1970s. West Berlin started to redefine itself as a cultural metropolis around 1976, 1977. Having no political relevance due to its Cold War status as a neutralised city, it turned to the arts – to history and historical discourse – to start anew. At the same time Bowie, exhausted and confused, found new energy in dealing with the ghosts of his own past. He’d loved expressionist art and film since he was a kid. He adored Kirchner and Brecht. He explored the cultural and historical undercurrents of the past (Weimar, Die Brücke, Marlene Dietrich) to write the most innovative pop music of his time. So it was a perfect match: Berlin found a future for itself by looking back, Bowie looked back and wrote music of the future.

An insightful and personal recounting of every song in the Bowie oeuvre between Space Oddity and Scary Monsters by a writer who eschews Bowie’s colourful personal life to focus on his work, which, he says “is arguably the most compelling and accurate account of the 1970s assembled by any artist, in any medium.”

I don’t have a personal relationship with Bowie in a face-to-face way. But as a fan I followed his music almost with a sense of disbelief, because of how quickly he was changing, how many different identities he was moving through, and how diverse his music was. But he wasn’t just changing for change’s sake: he was responding with incredible flexibility to what was happening both within his own psyche, and in the wider society around him.

One of the great joys for me of writing this book was being able to spend several months soaking myself in Bowie’s 1970s music – not just hearing what was on the records, but trying to think myself into what was happening inside Bowie’s life, and his head, when each one was made. I was able to track down much of what he was reading, watching and listening to during the 1970s, which helped to give me a unique insight into the music he made and where it came from.

I don’t think there’s anything in Bowie’s Berlin period that is more emotionally charged, and musically exciting, than the first side of the “Heroes” album. “Joe The Lion” and “Blackout” are about as personally and musically extreme as it is possible to be without losing control of oneself artistically, and Bowie almost never loses control in the 1970s.

A unique discovery you made while writing/researching your book?

I love the fact that Bowie threw himself so wholeheartedly into the street life of Berlin, rather than trying to live a closeted rock star life. But for me the key moment was how entranced he became by the work of the expressionist art group Die Brücke. I think those pictures had a huge effect on Bowie visually, emotionally and spiritually. I was astonished to find some film clips of Bowie in New York in 1980, when he was performing the lead role in The Elephant Man on stage – because he was like a living embodiment of one of the twisted figures in Egon Schiele’s self-portraits. There was talk that Bowie might play the lead role in a movie of Schiele’s life. It’s a real shame that the film was never made, because it might have been the crowning glory of his years in Berlin.