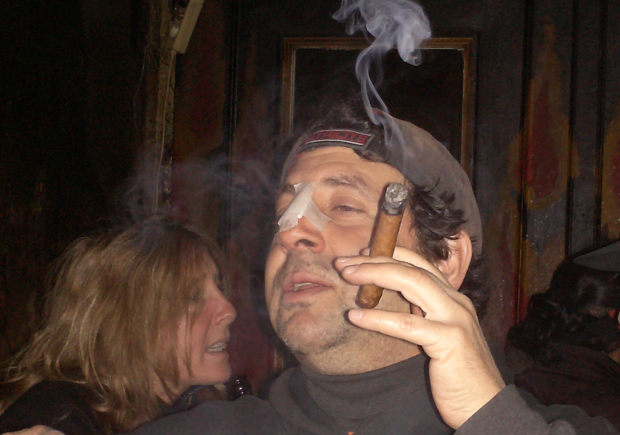 We were shocked and saddened to hear of David Solomon’s death on May 19. Ten days beforehand, the owner of Charlottenburg bookstore Books in Berlin had been involved in a bike accident and lapsed into a coma. He had owned the shop for 22 years, and was a fixture in Berlin’s English-speaking community. His friend Todd Calico shared some reminiscences with us.

What a great life!

For over two decades, Dave Solomon – aka Bookstore Dave – was a pillar of the literary community. Other book shops came and went, but Books In Berlin was always solid, stoic, and cleverly progressive. Dave used to love riding his bike, day and night. He often said that this was due to his opposition to the oil industry, and the unnecessary wars that it caused. He was hit by a taxi exactly on the date of the 70 year anniversary of the end of World War II. This is what we might call Synchronicity, like that excellent book by C.G. Jung. It is ironic, indeed, as Dave was a political animal. And yet it’s perfect, somehow.

David Solomon was a wonderful man.

He had many lives: bookseller by day, sports fan by night, helping hand and friend always. Dave loved people and he loved politics. He worked often with Democrats Abroad, and was constantly urging everyone to vote. He was quite fond of saying that he truly believes “in all that nice Democratic shit!” He fought for free speech and free will, wherever he went.

Dave had a heart of gold, and was always eager to help others. His smile was contagious. He had a great sense of humour – he could diffuse any situation just by cracking a joke. He had a large vocabulary and razor sharp wit. He could sting you with comic precision, or even shock random strangers, provoking raucous laughter. One time I took him backstage at Huxley’s Neue Welt to meet the British cult band New Model Army. The singer, Justin Sullivan, was telling us a story about how they weren’t let into the US during the Bush era. Dave blurted, “You think you’re hardcore, eh? My father is the last prominent communist in America! We’re all trying to get OUT!” Everyone started laughing, including Justin. It may have been the only time that the great singer laughed in his entire life. Ever.

Dave’s father, Mark Solomon, was a guest professor at the Humboldt University back in 1988. This was in the GDR during the time of the Berlin Wall, and they both have claimed that it was “quite an adventure!” It was during this initial encounter within the divided city that Dave cut his teeth politically. It also instilled a great love of Berlin that lasted until his dying day.

Yes, Dave truly loved this city. It was his home, and Books In Berlin was his base camp, his home plate. He always had a story to tell, especially if the Red Sox were playing.

I learned a lot from Dave, volumes. If you had a question about anything, you could just ask Dave. He was a walking bookstore, and knew endless and amazing historical facts. Dave and I travelled to Prague to go to a concert. In the main train station, he pointed out a statue of US president Woodrow Wilson. He launched into a soliloquy about how Woodrow Wilson had pushed for Czech independence during and after World War I. They even named the station after him: Wilsonovo Nádraží, until the Nazis changed the name. And President Wilson created the Federal Reserve, he said, a watershed event for America. He also initiated a major bank reform, making them “public, not private”. How timely! If Dave hadn’t pointed this out, we may have just walked right on past it.

That is also fittingly ironic, as the very first time that I walked into Books In Berlin, I was looking for a book by the former Czech President Václav Havel. The book was called Living In Truth. It was out of print, but Dave found it somewhere and got it for me.

Dave seemed to epitomise freedom and free thought, especially whenever he would hop on his bicycle. We had many great rides, and great discussions. Usually we rode to the Clash bar in Kreuzberg, or the Anti-War Cafe in Mitte. He also loved Schokoladen, one of the last communal bar/squats in the city. Dave was a man of the people.

Now, the entire block where his accident occurred is being demolished by investors who want to build (yet another) luxury hotel. Maybe Dave’s death is a warning to us all: whenever and wherever the powers that be start investing enormous sums of money, without caring about the people, there will be disaster. Anyone walking or driving past that corner will be confused by missing bike lanes, scaffolding, and fences all the way out to the curb. For what? Just another profit scheme. Yes, the construction company and investors are culpable in Dave’s death, not merely the errant taxi driver. Shame on you, money grubbers!

Dave was one of a kind. Berlin has lost a great friend! I will miss you, buddy…