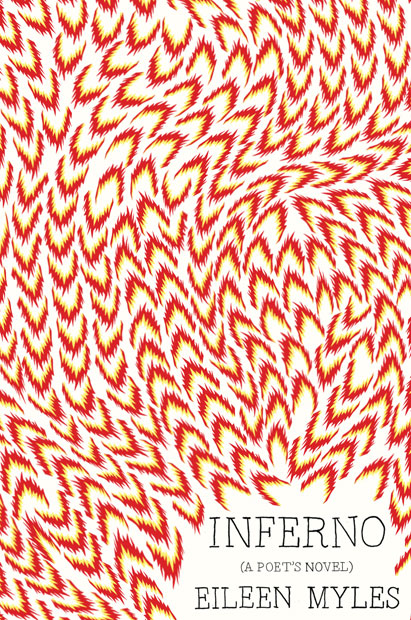 What was so striking about Patti Smith’s National Book Award-winning Just Kids was its focus on the making of Smith and Mapplethorpe as artists. Sure, there was the usual peeping at celebrities and luminaries that most (auto)biographies provide, but the book reached its conclusion as the original Patricia Lee truly became punk poet goddess Patti Smith.

Eileen Myles, a poet who came of age just as Patti achieved fame, also digs at the roots of her art in her ‘poet’s novel’ Inferno, a memoir that takes its name and structure from Dante’s tripart exploration of the afterlife. Myles’ book, though, is more explicit about becoming a sexual being as well as an artist. If Smith’s memoir remains vague about the desires that brought her together with a man who would become a controversial gay artist, Myles’ sexual awakening is a crucial element of her development as a poet.

From its first line, “My English professor’s ass was so beautiful”, Inferno burns brightest when Myles’s lesbian and literary ambitions intersect. While the writing here may seem eccentric (there are no quotation marks to denote speech, and the second, ‘Purgatorio’ part is, sort of, written like a grant proposal), one soon acquires a taste for it, and I can only hope that this reaches as wide an audience as Just Kids (if only to warrant affordable reissues of Myles’ stories and essays).

For a taste of Myles’ poetry, I’d recommend this awesomely vintage video of her An American Poem, you can order Inferno at O/R Books (and why don’t you? Which other book comes recommended by both John Ashberry and John Waters?).