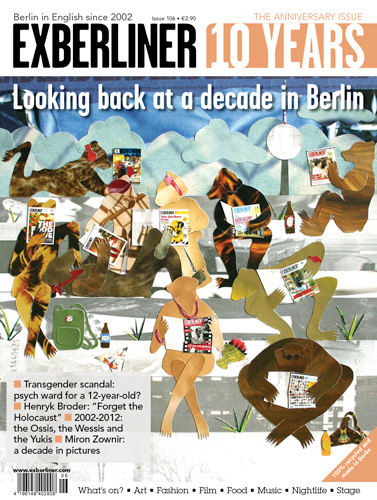 The June 2012 TEN YEAR ANNIVERSARY SPECIAL is out now!

THE TEN YEAR SPECIAL! In honour of Exberliner’s 10th birthday, we take a look back at a decade in Berlin: the trials and tribulations, spills and thrills, scandal and triumph, the Ossis, Wessis and yukis that kept you turning the page.

WHAT’S CHANGED? Murder, unemployment and bike theft: not everything has gotten worse since 2002.

LETTERS TO THE EDITOR Too gay! Racist cave dwellers! Anglophone wankers! Our editor trawls through 10 years of readers’ rants.

TEN YEARS AGO IN BERLIN Exberliner follows up on the demise of Spreepark, the introduction of the euro, the legalisation of prostitution and the most memorable changes in Berlin over the last decade.

LOST IN TRANSITION! With a 12-year-old local transgender girl facing institutionalisation at the hands of Berlin authorities, the transgender debate in Germany has been reignited.

Plus all the latest in film, events, fashion and much more!

You can order our 10 year special here. Or subscribe now and get a free restaurant voucher worth €15!