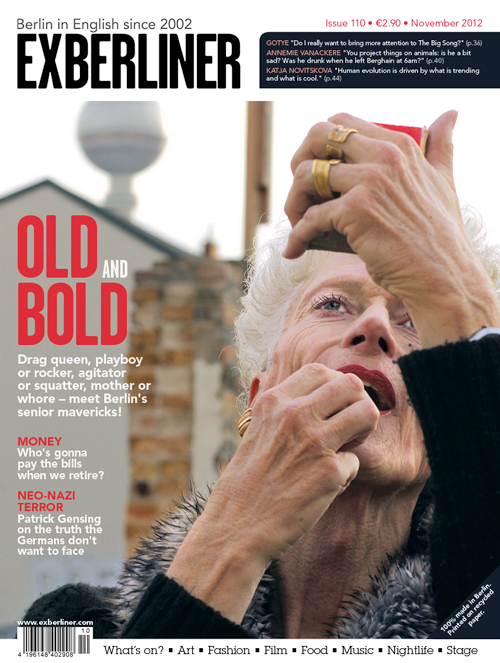 Our November OLD AND BOLD issue  is out now!

WHO’LL PAY OUR BILLS WHEN WE GET OLD? We all hope for a carefree retirement but it is looking more and more like old-age poverty awaits us all. Will you cope on less than €688 per month?

A TO Z From ‘Average’ to ‘Zehlendorf’, we go through Berlin’s most fascinating old facts!

The MOTHER AND THE WHORE Berlin’s oldest mother was 55 when she had child number 13 and Eva is Berlin’s self-proclaimed oldest prostitute at 71.

OLD AGE RAMPAGE Protesting and activism are ingrained in this city’s psyche and the elder generation aren’t afraid to take their stand too.

GERMANY’S MOST UNEMPLOYABLE SEXAGENRIAN We talk to Udo Voigt, NPD’s former front man and see how he is faring on state unemployment benefits.

Also in this issue:

GOTYE This Belgian-Australian is definitely somebody you will always know. He tells us about life since The Big Song.

ANNEMIE VANACKERE The new artistic director of Berlin’s most exciting performance venue, HAU, tells us her plans for the institution.

KATJA NOVITSKOVA With a solo show at Kraupa-Tukany coming up this month, the artist explains how her Materialist philosophy informs her work.

Plus all the latest in film, food, events, fashion and much more!

Order the November issue or subscribe now and get a free restaurant voucher worth €15!