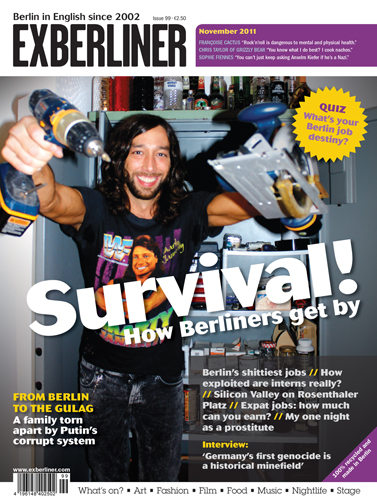 Our Survival! issue is out now!

FROM PRENZLAUER BERG TO THE GULAG The unbelieveable true story of a family torn apart by Russia’s ongoing imprisonment of tens of thousands of businesspeople on fabricated charges.

DON’T MENTION THE G-WORD Death camps, mass executions and starvation: all part of the lexicon of horror that is sadly associated with Germany’s past. Few know that this reign of terror dates back to German colonial rule in Namibia.

BERLINERS IN THEIR WORKPLACES Partying does not pay the bills, but in a city with the highest unemployment rate in Germany, you have to find some way to survive. Seven expats share their stories.

SILICON ALLEE Capitalism is alive and kicking on Rosenthaler Platz. Since 2005, an increasing number of start-ups mean that suddenly a lot of money is circulating in the city.

THE ULTIMATE EXPAT SURVIVOR The man known in the scene as “Kalle” spent 16 years of his life in our fair city. Read his idiosyncratic rise and how last month, he left a five-word goodbye on Facebook and quietly flew home to Virginia.

AND… Be sure to take our highly scientific quiz to reveal your Berlin job destiny. Once you’ve figured out what it is you have in store for you, take a look at our feature on Berlin’s coolest co-working spaces.

You can order the November issue by clicking here! Or why not just subscribe?