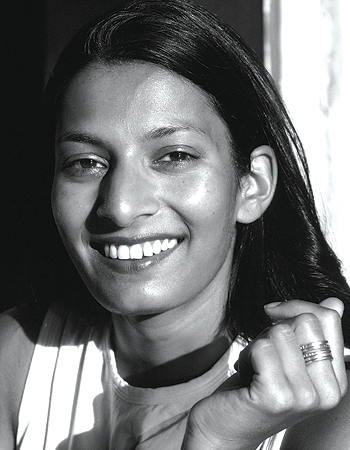 Kaffee Burger veterans will remember Priya Basil reading evocatively from her debut, Ishq and Mushq, nearly three years ago. In June, good fortune and geographical serendipity have ensured that EXBERLINER’s “Wednesday at Burger” offered the first taste of her second novel, The Obscure Logic of the Heart (out this month at Doubleday).

To start: the second novel syndrome is nowhere in evidence. This is a body of work that moves forward, picking up on a major theme of the first – cultural identity in immigrant communities – and dealing with it at new and deeper levels. The multiracial world that Basil described in her first book was small and self-contained: a kitchen confidential. Now, the protagonists are properly caught in the maelstrom of contemporary civilisation. Basil’s maturity as a writer is newly reflected in characters whose emotional, ideological and political lives are wound as tightly as a cable harness – redolent of the complex personalities created by CP Snow and Evelyn Waugh.

There is a bigger picture out there, and Basil is eager to discover its internal workings. Lina’s family lives modestly in Birmingham, according to the tenets of a consciously embraced Islam. Anil’s domestic environment is one of glamorous, if dubiously acquired wealth in Nairobi’s expat community, where the Sikhism is so secular as to barely register. Anil and Lina meet in London as students in the no man’s land between promise and commitment. They are second-generation immigrants – like Basil herself – and we sense the author getting closer to her characters. Does this novel mark a coming of age for Basil in terms of greater proximity to a matrix of issues: stability, identity, cultural self-acceptance?

Part of the challenge in writing this novel was to explore mindsets quite different from my own, in particular a devout religious sensibility. At an intellectual level, it’s easy to feel alienated from a person whose world view clashes with your own, but if you can connect with the person emotionally, the differences can often be bridged. The task of the writer is to negotiate the unmapped territory between us and the other: to conquer, word by word, the distances that seem too vast, too daunting, too unknowable. This can’t be done unless you let down your guard, step beyond what you know and open your heart.

This novel turns on faith, but not just the faith of injunction, tradition or creed. There is also the possibility of faith in love, in oneself and in others. It is Anil, the ideologically weaker character, whose faith is perversely stronger, who is driven by the need to make the relationship work and the belief that it will. Sure, Lina has more to lose: her family are radically opposed to the union. Ultimately, she risks losing their love and the contextualisation of her entire existence. And yet, and yet… We root for Anil, for his headstrong desire and the dogmatic charge of “love conquers all”. But Basil’s endings are nothing if not ambiguous. We are left to look at and lovingly tend the scars of battle, keeping above all the fullness of a heart that has loved and lost – and the possibility of resolution.

And it’s not just at an emotional level that we feel Lina’s susceptibility to ideology. Her work for the UN reveals the depth of Anil’s family involvement in small arms trafficking – an involvement she must face although she is wilfully resistant to the implications of her knowledge. Basil spans a large canvas of well observed and entirely credible thirdworld nepotism against which Lina’s work for a better world seems like a cry in the desert. Woven into the bigger picture are many small, luminous threads of conversational snippets, situational snapshots, the humdrum of life lovingly seen and recorded. The micro- and the macrocosm are bound together by all that happens in between and, above all, in between people. The book flows at all levels, but here, for me, is Basil’s true strength: her interest in people, her sympathy with them, and the way she brings this to bear on her narratives. Does she agree?

I am fascinated by people’s interior lives, but I’m equally interested in the external forces that shape one’s destiny. Instances where the public and private collide attract me because they throw up the

most profound questions about existence. In this novel, I wanted to create a heroine who loves passionately and yet cannot simply follow her heart. Lina’s indecision makes for high emotional drama because we’re not sure whether her civic sense of duty will trump her personal loyalties – and, despite the moral ambiguity, we rather hope it doesn’t. This human impulse to give the heart precedence amazes and inspires me.