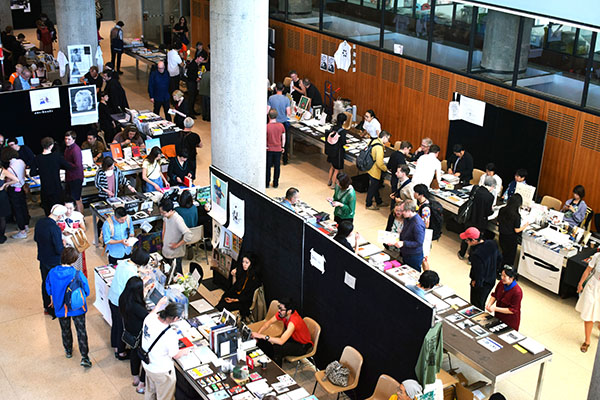 Avocado Johnson goes to that thing you’re curious about to answer the question: Are you missing out? This time: the Miss Read Art Book Festival.

Having lived in Berlin for ages and not yet been able to escape the all-powerful orbit of Mark Zuckerberg, I’ve borne witness to what I call the Rise of the Nonsensically Viral Facebook Event. You know what I’m talking about. It’s when the algorithm informs you that some 20 of your friends from multiple disparate circles are all “going” to the same thing, despite never having evinced an interest in said thing in all the time you’ve known them.

As I found out at the first Japanese Christmas Market, actually going to these things tends to be an experience akin to hitting up the Brandenburg Gate on New Year’s or (as of this year) Görlitzer Park on May 1. But I decided I’d make an exception for this year’s Miss Read Art Book Festival. After all, it was a niche event all the way out at HKW featuring a day dedicated to “conceptual poetry” and an opening talk between French sociologist Bruno Latour and German climate scientist Hans Joachim Schellnhuber. Surely 5000-plus Berliners weren’t really “interested”, were they?

Turned out I’d underestimated Berlin’s thirst for empirical metaphysics and theories about the Anthropocene. The queues at opening night reportedly rivaled Berghain’s. But at least on my visit a bit later, the fair itself never got beyond the point of pleasantly bustling, despite an advertised focus on – wait for it – Japanese publishers.

The crowd was about what you’d expect: lots of pretty arty people with tasteful little tattoos and tote bags (so many tote bags!) browsing prints, posters, zines and dialectical discourses on site-specific arrangements. Belgian editor Wilfried Huet was giving a fairly impenetrable talk about his magazine Gagarin while, in a corner, artist Tanja Ostojić offered female-identified people a gender-pay-gap-reflecting 30 percent discount on her famous EU crotch poster. I suddenly became aware of the ridiculous quantity of Berlin art publications, from Spike to Berlin Quarterly to something called Free Paper – where are they getting the money to print all this stuff?

Anyway, it was a perfectly fine way to spend a Sunday afternoon, but I still couldn’t see where the virality had come from. From an average Berliner’s POV, the event wasn’t all that different from last year’s Zinefest, which had garnered healthy crowds but only 394 “Going”s. I guess saying you’re going to or interested in an “Art Book Fair” just sounds more aspirational, a way to prove to your friends how cultured you are without (necessarily) leaving the house. Either that or the HKW has discovered how to use social media bots. The next phase of their Anthropocene?

FOMO Factor: 2. Art book fair lovers can always go to Friends with Books this autumn. And viral event lovers can go to the Dumpling Festival.