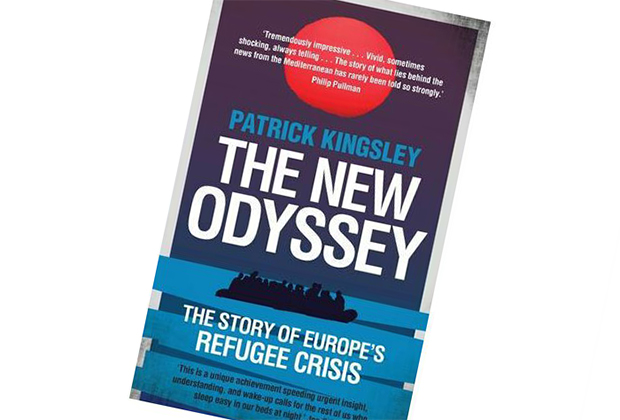 Migration correspondent for The Guardian, Patrick Kingsley’s work detailing migration patterns has earned him the accolade of Foreign Affairs Journalist of the Year 2015 at the British Journalism Awards. He appears for on stage on September 10, 6pm at Haus der Berliner Festspiele to discuss his book The New Odyssey, a exhaustive report on the refugee crisis using research conducted in 17 countries.

The idea that its somehow idealistic or emotional to address this crisis in a more humane way. To come to Europe by formal means. That’s a very rational, logical response to the crisis. And its irrational and emotional to think that we can just put up some fences and make the problems to go away.

What is the genesis of your books? How do you get started?

Well, I write primarily because I’m a journalist, and I’m a journalist because I want to find out about the world and being a journalist allows you to be nosy in a way that you otherwise wouldn’t be allowed. I’m a writer because the nature of writing an article is my favourite way to try to sort through everything that I’ve been experiencing.

Anywhere from on my phone in the back of a car, to my laptop in a café or airport lounge or maybe even on an airplane. I’m constantly on the move, part of my job as a migration correspondent, and having to write on deadline, means I can be writing anywhere, often in quite uncomfortable positions. In the beginning that was quite hard, but over time you get used to it. I’ve written stationary in two different flats, one in Hackney in Northeast London, and for the book about refugees in Jordan.

When I’m on deadline. When the Turkish coup attempt happened then I was writing at 2am Turkish time for The Guardian. Or when I was writing my book I would be writing between 8am and 10pm, depending on how productive I was that day. When I’m writing I tend to write until I’ve accomplished what I want to do.

I need a deadline. It forces me to get my act together. Also: a plan, an idea of what I’m going to say. When I wrote my book about Denmark I needed to switch off internet access, so I got program called Freedom, which blocks it.

My writing is mostly journalistic so my nightmare is getting something wrong or in terms of what someone said, being inaccurate. A journalist is only as good as his accuracy.

The one that instantly comes back to me: on holiday as a three-year-old being forced to write my diary by my mum and generally feeling a bit miserable. A daily diary… my mum made me and my brother write my daily diary – from age three.

A teacher. I had a job as a teacher. Then I got offered a job at The Guardian. English literature.

My least favourite is “migrant”, at the moment. As a migration correspondent, I constantly have to use the word, but it’s so politicized, I don’t feel it properly conveys to the reader the humanity of the person that is being described. It’s become a dirty word, rather than just a simple statement of fact, a statement about someone being on the move.

Favourite word at the moment: “sovereignty”. Because in the UK, as part of the whole Brexit debate, a lot of the Brexiteers have been banging on about sovereignty, despite the fact that I feel Britain has become less sovereign since we voted to leave the EU. It’s become something of a joke to me. I’ve enjoyed using it ironically.

At the moment I like the authorial voice in all of W.G Sebald’s books. The authorial voice is that of someone whose name we never quite learn, but who takes us on long walks – long journeys to meet interesting people. It’s always mixed up with the voice of the person he’s meeting, so after a while you get a bit confused about who’s speaking and who’s who, and I think that’s what Sebald wants us to leave with.

I very recently read a book called Chrenobyl Prayer by Svetlana Alexieyivish, and I just thought as a piece of journalism and a piece of writing it had achieved pretty much everything I would hope to achieve one day. In so far as it is a vital piece of reporting about a seminal moment in history. And also its poetic in its own way.

Keep it sovereign, because, uhh, it’s too complicated to explain. It’s half a quote from Nathan Barley from the early naughties. I’ve adapted to keep it sovereign.