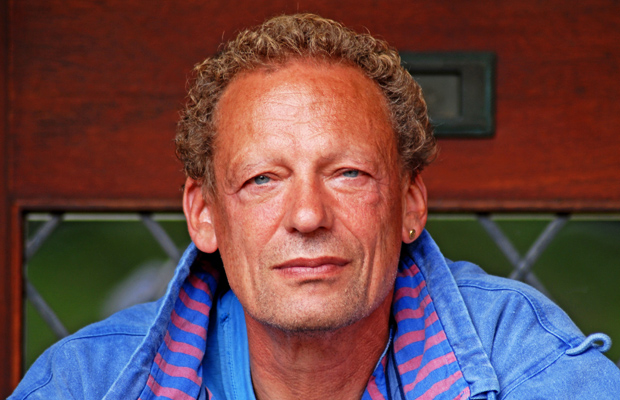 Dreams are Klaus Vollmar’s life. The psychologist, lecturer and dream analyst has penned an impressive number of books in German on dreams, as well as the Little Giant Encyclopedia: Dream Symbols in English. He now lives in Norfolk, England, where he frequently holds dream courses and workshops. He travels to Berlin regularly to hold classes for the curious – neophytes and specialists alike.

Forty years ago, on an expedition into the Sahara desert, I caught a bug and became quite seriously ill. I was taken to a doctor. He wanted to know if he should treat me in the conventional way or the traditional way. My girlfriend answered for me, because I was… really not okay. She said, “traditional is much better!”

So the doctor placed me in a tub and he gave me something to smoke. I didn’t ask him what it was, but … man, it was great! I was dreaming the whole day long! In the evenings, he would come around and I’d tell him what I dreamt. After a fortnight, I was perfectly alright. I had always been interested in symbols – in literature in particular. But that experience made me think: well, dreams are interesting!

Where do dreams come from? What are they?

Dreams get their energy from problems – and everybody has problems. It’s the people who think they don’t who have the biggest ones – ha! Dreams produce what you don’t see in your conscious life. Sometimes a dream is a model of what you should try. Other times, it shows you what you do too much. Recurring dreams mean you are repeating the same problem, again and again. They tell us, “Hey! Look at this and change yourself – now!”

Are they all about sex, as Freud once suggested?

Today’s problems are not the same as in 1899 when Freud wrote his The Interpretation of Dreams. His “wish fulfillment” theory was really a product of the zeitgeist; back then, sex was a big problem. Nowadays, you can have that whenever, however you want. Today, relationships are much more of a problem.

Are dreams a human attribute? Do animals dream?

All mammals have dreams. And birds as well. For cats and dogs, their dreams are training programs, like ‘how to catch the mouse’ and ‘how to get the bone.’ There’s an evolutionary explanation for this. In mammals, the brain has to be small – otherwise it’d be too big of a problem giving birth. It’s like with computer technology: hardware and software. The dream is the software that makes this [taps his head] small hardware so very effective.

So you analyze human dreams: how do you proceed?

But aren’t dreams singular? Do we all dream about the same stuff?

People often think: “This is my dream, my personal dream.” But when you listen to a lot of dreams, you’re usually able to say, “Aha – I’ve heard this one before.” We all confront similar problems in our society and therefore, dreams are quite similar as well. Giant waves, for example – that’s a classic dream of someone who is too dependent on their emotions. Drowning too. Water is one of the Jungian archetypes – it always has to do with feelings.

Do you always eventually understand your patient’s dreams?

It takes a lot of dialogue really – especially because symbols are so complex. Probably for reasons of velocity and capacity, our brains store contradicting meanings in the same place. This is why quicksand can be a symbol for both too much grounding and a lack of grounding. Likewise, fighting in a dream could tell you that you fight too much or that you need to fight more.

In the end, you need to ask the person which of the interpretations is right. And usually they will know. When a dream is utterly beyond comprehension, that’s usually a sign that the person is severely neurotic – psychotic, even. These people live so much in their own world that it’s hermetic – the analyst can’t get in.

How much do we dream? Do some people dream more than others?

No. The number of dreams is the same for everyone. Well, of course it depends on your definition of a dream though. If you define it as a state of consciousness where the subconscious is more influential than the conscious, then we actually are dreaming every third minute. That is, we are not in the here and now – we fantasize. That can be very productive, but it’s very brief.

In sleep it’s longer. During sleep we dream every 90 minutes. The first dream is the shortest and the last is the longest – no matter how long you sleep. On average, here in Central Europe, people sleep 7.5 hours.

Do we dream less as we grow older?

For people 65 onwards, the deep sleep phases are quite rare. Older than that – 75, roughly – you pretty much lose REM as well. You seldom dream. By 90, it stops altogether. The theory about this is that dreaming is important for learning, and after 75… well, you’ve learned already.

So, are babies compulsive dreamers?

Babies – they dream half of the day! Their brain has to learn basic differentiations, like subject versus object. For example, Anna Freud tells us that a baby sees the mother’s breast as a part of itself. And a baby’s dreams condition the brain to make important conceptions automatic – like “Hot hurts!” or “If I cry, I get the breast.” These are things they need to learn, and that is all done during the REM phase.

It’s like in a computer: there is a lot of information, but they have to figure out how to organize it. It’s like defragmenting the brain’s hard drive. You delete, during the dream period, all these… failed actions.

Yes, they typically dream of monsters. That’s always the parents! The idea is quite simple: the child loves his parents – but, at the same time, they are the oppressors, the people who say, “No. You’re not allowed.” But you are not allowed to be aggressive against the person you love. At least not consciously. So, children create this monster. Another classic dream for children is that the parents are dying or have died. This is an even higher level of aggression.

I can still remember one of the earliest dreams of my life. (Jung says those are very important to remember.) In the dream, I’m falling endlessly into the universe. First, I see stars. Then the stars turn into killer bees that attack me! In the end, the bees turn into mattresses that whirl around me as I fall and fall.

How can people better remember their dreams?

Actually, it’s not that hard. First of all, you have to want it. Secondly, it has to do with your behavior: how you wake up. Most people, if they wake up and they do not immediately jump out of bed, but instead take one or two minutes to think, “what am I feeling right now?” – that’s enough for them to remember their dream, or at least a part.

The ‘hypnagogic state’ [think: snoozing between alarms] is also useful because you are not 100 percent in the dream state any longer – more like half and half. This means you can think about a problem and let your dream play around with it.