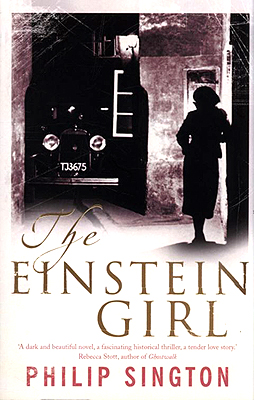 Berlin is an Eldorado for mystery writers: Beatrice Collin, Aris Fioretos, Rebecca Cantrell and – recently and notably – Daniel Vyleta, have succeeded in making the most of this locus delicti. Even amongst this illustrious company, however, Philip Sington’s The Einstein Girl (Random House, 2009) stands out as a story of exceptional interest.

Sington bases his novel on the premise that there was an heir to Einstein’s genius. Before they were formally married, Einstein and his first wife Mileva Marić, herself a renowned mathematician, had a child. Born in 1902, the illegitimate Lieserl may have died in infancy – but in the absence of death certificates, there the possibility remains that she may have survived. Indeed, scholars believe that Einstein and his future wife decided to put the child up for adoption in Marić’s native Serbia. In Sington’s novel, she is educated there and develops into a prodigy herself. Leaving the isolation of her rural upbringing to study mathematics, Lieserl/Elizabeth learns, by chance, that she is very likely Einstein’s daughter. On the eve of the great scientist’s departure for the US in 1933, she travels to Berlin to confront him, hoping for a measure of parental recognition. Instead, she ends up floating unconscious in a lake by Einstein’s summer house near Caputh.

A ‘What if?’ story bar none: world-shattering fame, a potentially fraught father-daughter relationship, the conflagration of genius and emotion – all under the cloud of quantum physics? Which, of all these aspects, most fascinated Sington?

What drove me to write the novel was actually the discovery that there was a striking connection between Einstein’s genius and his emotional life – contrary to my expectations. Einstein’s family life was a strange and troubling one. He seems to have cultivated an extraordinary degree of detachment even from those closest to him, his wives and his children included. This was not just because he was busy, or because he was devoted to his work. It was that he came to see detachment from human concerns and human perspectives as necessary and desirable in his pursuit of ultimate truth.

When Charité psychiatrist Martin Kirsch is called in to unlock the young woman’s frozen memory, he finds himself delving not only into the mystery of her identity, but also increasingly into the darker side of the great man himself. In Sington’s depiction, Einstein is a man growing aware of his limitations. He has dispensed with certainties, including the assumption that the observed universe is static: an absolute framework for our observations. Instead, he famously made relativity the bedrock of all observed phenomena – and in so doing, put man into the equation. If relativity applies to all elements, then man and his position within the observed world must influence what may be deduced from it. Ultimately quantum theory makes him “part of what he dissects, whether he likes it or not”. How important was it for Sington to get across this revelation that quantum theory has implications for the way we witness ourselves?

In a word: very important. Niels Bohr, the Danish physicist and pioneer of quantum mechanics, famously said that the only language with which we could describe the subatomic world was the language of poetry. When energy or matter – the reality upon which all other realities are built – are broken down to their most fundamental elements, language and the normal operations of reason appear almost useless. Reality becomes increasingly fantastical. Strict causality disintegrates, and what we are left with seems more like a dream than the world we recognize. If there is an underlying principle, it is the principle of uncertainty. Unfortunately, human beings – at least most of them – need certainties in order to function: the certainties of creed, ideology and religion. But satisfying that need, I believe, comes at a terrible price.

Whereas most of us live with an occasional glimpse of our cosmic insecurities, it would seem Einstein faced them daily. Yet in view of the way Sington depicts Einstein’s treatment of his children, it would also appear that the great scientist’s moral fiber was limited, and applied largely to theoretical matters. Was this iconoclasm a conscious endeavour, or did it develop during the writing process?

I certainly did not set out to denigrate Einstein. His contribution to human knowledge was breathtaking and almost without precedent. But his battle with the uncertainties of quantum mechanics (a field of science to which he gave birth, but which later grew to appall him) finds extraordinary echoes in his private life, and it was this that I was drawn to. Einstein remained at heart a classical physicist. He believed in the objectivity of science; that the scientist could stand outside of reality and observe without the need to also interact. That hunger for objectivity seems to have coloured his attitudes towards his family, with tragic results.