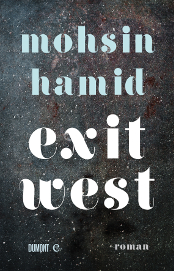 With nearly a library’s worth of books to pour over at this year’s International Literature Festival, it can be tough to know which ones to sit down with. We’ve taken some of the hard work out of it and have selected our pick of five killer reads.

Saeed and Nadia meet in an unnamed Asian city on the brink of civil war. As the political situation disintegrates, they consider leaving via secret black doors that have begun to appear the world over. Hopping from Greece to London and finally the US, Hamid’s lucid observations infuse Exit West with a precarious, Borgesian sense of familiar otherness as he profoundly reflects on the way loss changes identity

Stefan Hertmans uses two real life letters from the late 11th century to trace the life of Vigdis, a Norman girl from Rouen who falls in love with a young Jew around the year 1088.The couple settles in remote southern France where tragedy overtakes them. Hertmans occasionally resorts to adjectival hyperbole, but as a story of itinerants travelling with the ancient companions of persecution and loss, De Bekeerlinge is an ILB must-read for Flemish or German speakers.

Globalisation theorist Appadurai builds an elaborate argument on the failure of language to disentangle the ciphers of modern finance, unpacking terms like “asset-based securities”and “credit default swaps”.In order to reclaim agency, he invokes McKim Marriott’s and Deleuze’s notion of the “dividual”as the necessary counterpoint to the Western construct of “individuals”.Yes, it’s complicated,and Appadurai’s work demands perseverance —but it’s rewarded.

The role of hierarchy and exploitation in defining today’s Singapore soon becomes apparent in these wonderfully quirky tales of servants and masters, rejected wives and ageing pop stars. With a clear-eyed and affectionate appraisal of human needs, Koe’s startling use of idiom and situation comedy (“She loved holding on to his penis and scrubbing it… the way she would a radish”) mostly saves her stories from grimness, leaving the reader curiously lighthearted.

A group of young women find themselves in the remote Australian outback, shorn and smocked and forced into mind-numbing labour inside a ferociously secured compound. The scenario that Wood develops goes beyond Conrad and Atwood, showing sexual conditioning as a deeply ingrained deterrent to independent female identity: these elementally revised women finally get a shot at physical and emotional freedom, but not all of them make the cut. Enslavement and emancipation have seldom felt so coupled, and so close.