Remember when the scariest event in world news was the bushfires in Australia? It’s hard to believe that was just about a year ago. But Australia’s dramatic climate reappears in Madeleine Watts’s stunning debut novel The Inland Sea, out now on Pushkin paperback. This gripping novel follows an impulsive young woman who works at an emergency hotline call centre, weaving in meditations on Australia’s dramatic ecology and dark colonial past. Watts, who lives between New York and Berlin, called us from her Wedding apartment for a good old chat about the weather.

The novel begins with this amazing image of the sea serpent washed up on the beach, the first of many appearances of water and snakes. Why start with such dread?

There is a lot of dread [laughs] and it doesn’t really abate. I’ve always written about snakes – I have a phobia – and now I lean into the fact that they’re always there. The book opens with the protagonist remembering how her mother had told her that if you ever encounter a sea snake, you have to clench your fist so they can’t bite you between your fingers. This suggests paranoia, but it also introduces ideas about protection, safety and taking care of the environment. The book ends at the same beach but with lots of dead birds – which actually happens at that beach during a storm. So there’s a lot of symbolic content in the book that I’m playing around with and resisting: these are the parts of the book that push it to the point where some people think it’s surreal. But I think at some level that’s just, like, life in Australia.

The question of realism is an interesting one. People are talking about this novel as ‘cli-fi’. Do you agree?

The problem is that cli-fi is meant to mimic “sci-fi”, meaning it’s science fiction that deals with the climate. But my book isn’t science fiction. If anything, it’s historical fiction, because it’s very much based in 2013. All the disasters I describe are nonfiction. Some are reconstructed from newspaper archives. That’s important, because I wanted to represent what it is like to live right now. Fiction has often treated climate change as something that could happen in the future – like in The Road, it’s about how the world might be once the catastrophe has already happened.

Fiction has often treated climate change as something that could happen. I wanted to write instead about what it’s like to live in the experience of a changing climate.

I wanted to write instead about what it’s like to live in the experience of a changing climate that is not always a tangible part of your day-to-day but that’s already there – it’s in the air all around you. It doesn’t touch your life that often, though when it does it’s obvious. It operates as a concept that fills the air with anxiety. It makes you pay attention to things you might not have paid attention to before – hence all the dead animals in the book.

So would you agree with Indian novelist Amitav Ghosh when he argues that climate change threatens the conventions of realism? It seems like you’re saying that what comes across as sci-fi to some, is realism by Australia’s standards.

Southeast Australia operates with Biblical weather – it’s actually the same mediterranean climate described in the Bible. How you exist, how you experience weather there is different from England or northeast USA. There’s a way that weather dictates the stories that are told. And I think Australia has always had ‘surreal’ or non-real weather – it doesn’t fit the realist novel – and climate change just makes everything exaggerated. And that’s realism’s problem.

The protagonist works as an operator for Australia’s emergency hotline, a brilliant way to penetrate her life with all these other crises. How did you come up with it?

Because it was my job! [laughs] I’m very interested in writing about women that are half-formed, and the idea of women being porous to the things around them. Thinking about that made me really think about that job I’d had because I was really bad at it! Other people at the job were good because they understood that it wasn’t about them. But I would get really upset, I would cry at work in the bathroom, it was a really bad job for me to be doing. And I knew it had something to do with boundaries, that I was letting the calls affect me, and that other people had a sort of wall that I didn’t.

Is your protagonist also unable to shield herself?

In that job, nearly everyone you speak to – sometimes 50 people in a 50-minute spell – is having one of the worst days of their lives. And I had some experience of calling the emergency line myself. You don’t have time to tell whether you’re calling from this or that state – you need someone there immediately. Your whole body is filled with adrenaline and you can only focus on the right now, the present tense. That’s very much how the protagonist experiences life, and it’s very much how the book is. It’s a very unreflective book. You are so close to the narrator and what’s happening – the backstory is violence, natural disaster, frightened animals. So it all comes across in the register of panic. And when you can’t reflect – because all you have is a fight-or-flight response – it can become very difficult to escape from anything. That’s why I wanted the structure of the book: it gets more and more and then just ends, without much resolution.

There’s a huge nightmare finale, with Sydney drowned under water and fig trees and eventually returned to the wilderness. Did you feel a sneaky little thrill to do that to your hometown?

I don’t know, sort of [laughs]. I mean, there’s something sort of thrilling about apocalypse, in a terrible way. I’ve gone through phases about Sydney: it feels like my native habitat, with the smells and the bird sounds and all, but also I really know I don’t want to live there, at least for now. But yeah, I think there probably was a sense of [laughs] wanting to set in on fire and watch what happened. 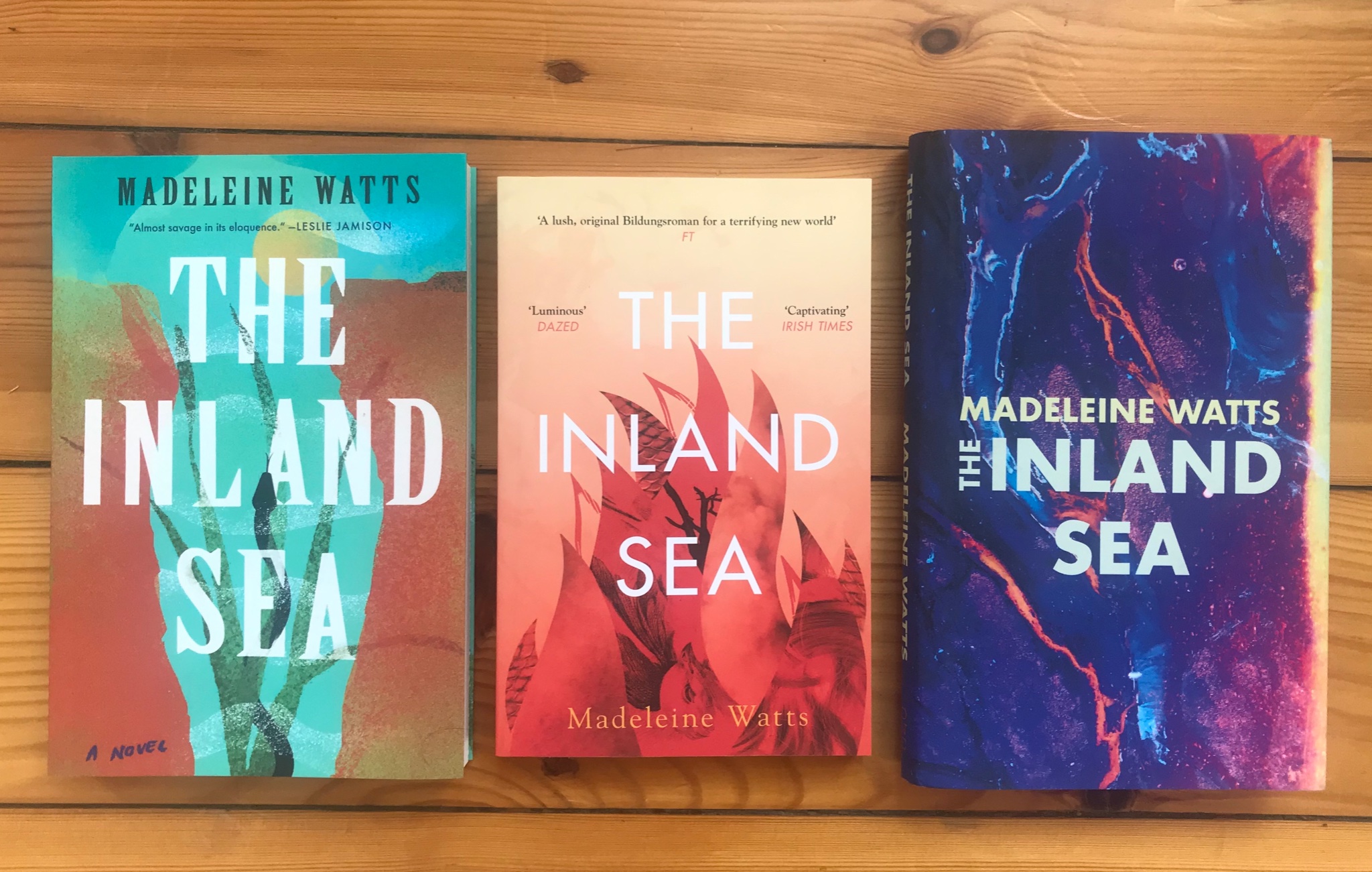 The novel mixes the protagonist’s story with that of her distant ancestor, John Oxley, who led a disastrous mission to find Australia’s nonexistent “inland sea”. Is this disappointment about the landscape, on the part of colonial Australian men, related to vindictive male sexual violence in the book?

It’s less the disappointment than this utter belief, based on a kind of “rational thinking” that isn’t rational, which perpetuates the inland sea as a kind of logical conclusion. Part of what the book says about the inland sea – why it works as an image – is that it’s been proven to be false but then still you have people like Charles Sturt going out in the desert saying, Right, this has to be here. It was an attitude to land that erased Indigenous knowledge; it wasn’t interested in paying attention to what was there or talking to the people who own the land. And that arrogance was something I was interested in. I can’t speak to every country but I do think Australian masculinity is different. It’s this monolith. I mean, I’m dating an Australian man now so I don’t have a leg to stand on – it’s not all Australian men.

“Not all Australian men?” You said that, not me! May the record show…

Yeah, I mean, it’s something that comes more from feeling rather than being a philosopher or having a PhD or something. But it felt really true to me that Australian masculinity is something different, and I feel it after being away from Australia for a time then going back. Like when men are out drinking in parks in Australia, for example, there’s this real intensity about them that I find confronting when I’m there.

The novel has many great sex scenes, which are vivid and original, but not always totally pleasant.

I am really interested in writing about sex. I think there is so much about sexual experience that can be captured which most books don’t do. There’ll be a paragraph break and then they’re smoking a cigarette afterwards. Or, when young women are having sex in film or music or books or whatever, it’s often seen as the agent of someone’s distress. Having bad sex or lots of sex or having sex at all is often pathologised as being part of the thing that’s going wrong. It was important to me to just string sex throughout the book as a constant presence: sometimes it’s good, sometimes it’s bad  but it’s not the cause of the problem, and fixing the sex is never the solution to the problem.

How was the novel received in Australia? Do you feel connected to the literary world there?

But I don’t really feel like I have a connection to Australia’s literary culture. I left when I was 23 – I’m 31 now – and there was nothing wrong there but I just didn’t really fit in, and probably didn’t try to.

That said, you’ve written some great essays about older Australian authors that you love – Christina Stead, for instance, who has also written brilliantly about Sydney from afar. Do you feel you have a different view on Australia because you’re overseas?

A little. Back when I was a student in Sydney, I felt that there was a general disinterest in Australian media, including literature. I felt like that, myself, until I started studying Australian literature and came to terms with the fact that I was always going to be an Australian writer whether I liked it or not – so I better engage with the tradition I’m writing in. There is also this suspicion against the Australian who leaves. You can go for a little bit, but then you have to come back – and if you stay away for more than four years, then you’re suspicious. And if you start writing, not only about Australia but about diverse things, then you become sort of placeless. I think being here in Berlin helps, as well, because there’s much more an expat scene than I ever was involved with in New York. So I feel like my main audience is probably people who left, whether it’s Australia or not.

Personally, I could only write about where I was from once I had left. Living in New York, I could never write about New York. But now in Berlin, I have been able to. But I definitely can’t write about Berlin. I think there’s some truth to the fact that you can only really synthesise a place and time once you’re not in it and you miss it.

How do you hope The Inland Sea changes someone after reading?

I don’t think it’s a book for everyone. I think for the right people it is consoling in the way that a mirror is consoling. But I don’t know. Certainly I’ve got asked a lot if I think the book is hopeful, and I find that not to be a useful question.

What did Kafka say when they asked him – that there’s unending hope, just not for us?

Yeah, I mean, it’s just a big thing to ask of, like, some woman who’s just written a book. You shouldn’t need me to tell you.