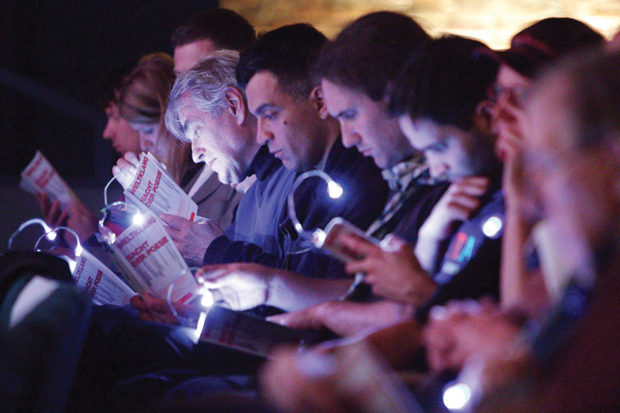 Addressing issues such as oppression, gender and cultural identity, the Poesiefestival introduces audiences to the power of poetry today.

In an age where language is often simplified and abbreviated, spoken-word artists are using poetry to speak and be heard at a level where conversation seldom reaches. Over nine days, 150 poets will be presenting their work across 51 different events, in both traditional and experimental ways.

In addition to Phillippa Yaa de Villiers and Tishani Doshi (both performing in “Rhymes from the Edge of the Comfort Zone, June 6, 8pm), the festival highlights artists from Ukraine and Turkey (on June 7 and 12, respectively) to question what political upheavals mean for poetry. A collaboration of New York poets and artists will reflect on wars both current and a century ago.

Meanwhile Les Murray, the man regarded as ‘the leading Australian poet of his generation’, will be reading poems which celebrate nature in his work dedicated to the ‘repoeticising of the world’ (June 7, 3pm). Plus concerts, exhibitions and much more; check www.literaturwerkstatt.org for the full programme.

Two of this year’s poets, coming from opposite sides of the globe, speak about how they make their voices heard.

“People don’t expect to be moved”

Tishani Doshi, from India, is part of the festival’s section “Rhymes from the edge of the comfort zone”. Doshi transports audiences to an India both colourful and dark. Successfully making poetry a career, with two books of collections and awards under her belt, Doshi says she’s taken it upon herself to introduce people to poetry.

How do you find new audiences for poetry?

I think festivals are a great way to go to a different country and come into contact with a new audience. I’ve also been going into not-your-usual scenarios for a poet. I read to software engineers and schoolchildren – taking opportunities to go to places I don’t usually go.

How do these audiences generally react?

I think people have preconceived notions of what poetry is. Each culture certainly has them. In India, poetry is – especially if you’re writing in English – very marginal. It’s considered not very important to the general conversation that’s happening. Unlike, say, literary novelists who are given centre stage. So, people don’t expect to be moved by it, because I think they also teach it in a very old-fashioned way in school. When they come to contemporary poetry, which can speak very directly and very concisely to the things that we are dealing with, I think people are quite surprised. It’s a very intense experience, and so I’ve always been slightly evangelistic about poetry. If even one person comes up to me later and says, “I never ever read poetry, but now I’m going to pick up a book of contemporary poetry occasionally,” I think, “Great, OK, one convert!”

Does it feel natural to perform your poetry?

I write poetry and fiction, and I’ve always found it much easier to present poetry to people because I think it’s very natural. Unlike fiction, which lends itself to a private communion with the book, not necessarily even wanting to hear the author’s voice. It seems to me very important to hear the poet’s voice, especially because there’s been little space for the poet in today’s world. As a poet, these kinds of things are very important – to have that live interaction. It’s very, very powerful and people underestimate that. They always come away quite empowered by that interaction with poetry.

“Poetry is being starved out”

Born to an Australian mother and Ghanaian father, Phillippa Yaa de Villiers grew up in a white family in Apartheid-era South Africa, not knowing she was adopted. The award-winning writer and performance artist uses her poetry, and in this year’s festival her ‘freedom songs’, to highlight ethnic heritage, exclusion and identity.

Do you think the doors are open to poetry these days?

No, I actually feel as if they are more closed. If you think about the market forces that control the industry, there’s a kind of devaluation of poetry. Publishers are often saying they don’t publish poetry because nobody buys poetry. I feel like it’s being starved out, but in a sense, at the same time there’s hunger for poetry at the street level.

How are you getting your poetry out there?

For me poetry is very much about connections and becoming part of a poetry-loving public. Basically, what we do in Johannesburg is that there are a lot of poetry sessions. People will open sessions at a house or at a public place somewhere. If you put your voice into that kind of context where people are concerned about similar kinds of things, then you become a little hub, a nodule that people can come and be part of.

What can we expect from your performance at the festival?

What I wanted to do was to bring you to my place, to bring you to South Africa where you can feel what it’s like. I like to bring people to the context that I’m in and hopefully touch people. I want people to be with me.