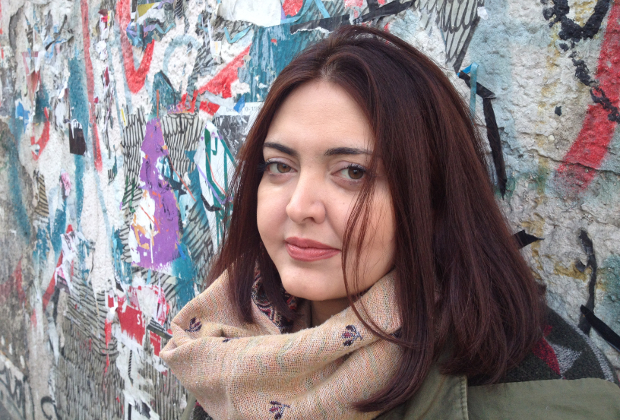 Syrian writer Rasha Abbas about her experience of Germany as a refugee – from learning the language to falling in with Berlin hipsters – as satirised in her book The Invention of German Grammar.

She’s 32 years old and from Damascus. A writer and a refugee. Rasha Abbas hasn’t even been in Germany for two years and she’s already published a collection of short stories here in Berlin. For someone so new to the country, and averse to the very concept of “integration”, she has managed to fit into the German literary scene quite well. Abbas was a television journalist in Syria before she left in 2012 for Beirut. In 2014, she received a three-month writing residency at Schloss Solitude Academy in Stuttgart and later moved to Berlin.

Her book, Die Erfindung der deutschen Grammatik (The Invention of German Grammar), is about absurd situations like accidentally getting involved in the avant-garde art scene. Written in Arabic and translated into German by Sandra Hetzl, it was published first as an e-book by Mikrotext and then by Orlansa Frauenverlang in hard copy. It critiques both Germans and Syrians in their attempts to live together.

This Saturday, June 25 at 8pm, you can catch the witty Abbas at Berlin’s third-ever E-Book Festival in Colonia Nova to hear her discuss writing an e-book and literature’s evolution as new mediums arise.

You grew up in Damascus; what was the Syria of your childhood like?

I lived my whole life there until I left in 2012. I would say I had a normal kind of middle-class family, or upper-middle-class. I spent my twenties there like any other person in the world – going to university or work during the day and at night to cafes or bars.

Can you tell me about your career as a journalist in Syria and the challenges you faced?

You have to be aware when you are working in a country where there is such a powerful regime ruling that there are many red lines, especially in political journalism. In my case, I was working in the cultural field, and were still red lines, but less so. Sometimes you could sneak in some news into the editorial about a novel that you knew may cause problems.

For example there was a novel – which would have been called Thick Warm Air in English – where the writer was speaking openly and honestly about the period after Hafez al-Assad was dead, and I remember I wanted to cover it for television. It was okay, because it was freshly published and I think before it was read and [the regime] found out what it was saying. So it’s something you can do, but only sometimes. But even this is a matter of luck, it can be really risky. In other situations it might not work so well.

Did you know you wouldn’t be returning to Syria when you left?

At first I didn’t know I would be gone so long. The situation did concern me because some people I worked with were detained and arrested at the time, so I thought I would leave just for a while to Beirut, watch what happens, evaluate the situation and then come back in a month. But suddenly this next month turned into four years. The longer you are out, the more you get involved with speaking against the regime and the more afraid you become to even try crossing the border again. I started publishing articles with my name and my picture and everything and I thought it was dangerous. So I decided as long as this risk is there and the situation is like this, I can’t go back.

What was it like in Beirut and when did you decide to leave?

The situation in Beirut was hard. You see signs in the street that say Syrians are not allowed to travel after 8pm and such. This is just one small detail, but it tells you a lot about how it felt. The whole atmosphere was aggressive and unwelcoming for so many reasons. Germany happened by coincidence. I was accepted to a writing fellowship at Schloss Solitude Academy in Stuttgart, and based on this I got a visa and I was able to come to Germany. I did three months in Stuttgart, and after that I moved to Berlin.

How did you feel when you arrived in Germany?

It was kind of a numb feeling; it’s not like being happy or sad. I felt totally blank. It was hard for me even to enjoy the little pleasures – tiny moments like sitting on green grass outside. When I arrived in this new environment, in Stuttgart, I was still thinking about what is happening in Syria, you’re family is still there, it was so hard to split myself between those two feelings.

Many of the stories in Die Erfindung der deutschen Grammatik are about Berlin. How do you feel about Berlin as a city?

Well, I like it because it has atmosphere. There are lots of people like you – freelance artists and writers who have left their hometowns and birth countries. This atmosphere of everyone coming from different parts of the world and yet things being so easy going: the daily chats when you are walking in the street smoking a cigarette and someone asks you for papers and filters, how easy it is to communicate with people and bond with them and the whole mood of the city. It was nice to try and make fun of this city that I love. For example there is a story called “The Hipster Apocalypse” and it’s imagining what would happen if the hipsters revolted in Berlin.

Can you describe some more of the moments in your book?

I had a story making fun of the weird art exhibitions and installation projects I see here. I’m lousy at understanding modern art. So I made a story called “How I Became an Artist” and it was based on sick drawings I made while learning genders in German – like drawing an apple with a moustache, a table with a penis or something with boobs just to remember the gender. In the story, those sick drawings were treated like they were really deep art that held deep philosophical meanings.

There is a lot in the book about my struggling with learning German because I was failing so miserably. I had the idea for a story called “How the German Language Was Invented” where I imagine two old men, two dukes, and their mission is to invent a language which is impossible to be learned by an Auslander – by a foreigner. It was their mission. Just to invent a language impossible for a foreigner to learn.

How do you see the future of refugees in Germany?

I am quite optimistic about it. It’s nice for these cultures to mix and learn from each other and exchange experiences. This is something I like more than this integration concept that we hear about all the time, which makes me feel like it’s a one-sided relationship. The refugees have to be integrated into so-called Western values. What I like most and I think is happening, is not this one-sided relationship.

I think we are now in a situation where lots of people on both sides are unhappy. But we are together now; we are forced to be together. So it’s what you make of it. Maybe most of us will go back to our countries, maybe some of us will consider having families and raising our children here. We don’t know, so we will have to accept it here and come up with the best results we can.

Can you imagine eventually writing in German or English?

I still feel like my priority is writing in Arabic for so many reasons. First, it’s the language I own. I can move in it so freely. I can be sensitive to each word, the exact emotional value of each word. Arabic is a very rich language. So I don’t see a reason, when I have good translators, to try and produce in English or German. For now, I only want to write in Arabic.

On one hand, I would go crazy if I was just to be able to visit now – just to go back to my old neighbourhood. But living there… it really depends on the situation of the country. We will have a country that is rising out of ashes. It needs to be rebuilt, so if there is something you can help with, it’s not any more about personal desires of staying here or going it will be a responsibility.

Any last words on e-books…?

Literature is slow to try mediums other than classicly printed books, which have been around for hundreds of years now, and that’s so disappointing. Even as we are developing the e-book market, we are using the same designs as the printed book. Just online. We are not taking chances and really investing in all the technology. But at least it’s a first step.

I was raised in a home with a large library. When I left, I had to leave my books behind, so e-books were a great help because you can build an e-book library just on your laptop. Then you don’t feel sorry you can’t collect all the books you want and carrry them from place to place when you don’t yet have a stable place to live.