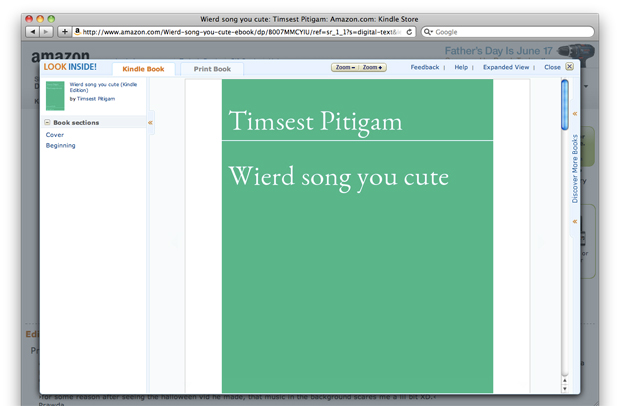 How an Austrian-German art project enlisted bots to transform Justin Bieber video comments into e-books and got kicked off Amazon.

An all-time favourite was Alot was been hard by Janetlw Bauie. There were other intriguing volumes such as Wierd song you cute by Timsest Pitigam and Sparta my have by Loafrz Ipalizi. They were all available as Kindle e-books. Not anymore. Amazon deleted them.

Don’t blame this on the authors’ poor grammar. There were no authors and it was not really English anyway – but a new language its creators call “Youtube slang”. The brilliant titles, crazy narratives and fake names were all made up by specially programmed internet ‘bots that randomly (and round-the-clock) compiled Youtube video comments – Justin Biebers’ were favourites – to automatically upload them on Amazon, soon flooding their e-book store with a new kind of ‘comment-generated’ literature. About 2000 volumes in three days. “Poor quality issues” was the reason evoked by the e-commerce giant to tear them out of digital existence.

Could you explain in one simple sentence what Kindle’voke Ghost Writers was all about?

Youtube slang, together with 4Chan, is among the most hilarious, strong and memetic languages known to us so far. Bernhard Bauch built a machine to harvest as much as possible, put it in structures of classical drama and automatically upload it to the Kindle Direct Publishing platform.

What inspired you? Justin Bieber?

The problems Amazon had with spam titles – slightly modified contents from the web – in 2011 and any hater flamewars on popular Youtube videos. It’s often haters who make videos or people popular, not likers.

You described the result as “digital Esperanto”…

Digital Esperanto is meant to be an insider language which evolves from computational communication mechanisms, picked up as mainstream typed or even spoken language.

Why did you use video comments – and not tweets or Facebook posts, for example?

Because they are less personal or not personal at all. Just memetical-driven rhetoric, repeated over and over, sharpened that way for general use.

What was your end goal?

Technically, to exploit Amazon Kindle Direct Publishing. Also to show up the power and strength of e-publishers in true massive amounts as a modern, digital characteristic: quantity as quality, mass as success.

Is it meant as a criticism of e-books?

No criticism. Our goal was to test Amazon’s reaction in terms of quality and in which ways they’d react to an invasion of titles which – theoretically – could take over every single category of their whole system just by pure amount.

Where does literature stand here?

Literature is a romantic term from the old world and probably depreciated. Ghostwriters marks the end of human-produced literature as a sustainable concept.

Was getting kicked off of Amazon part of the concept, or only a side effect?

It was human error. I accidentally logged into multiple accounts with my home IP, which led to Amazon discovering the connection between the accounts. Without that they could have deleted titles all day long, but an endless flux of ever-new ones would have come up, very fast and non-stop. Amazon invests a lot in detecting such stuff.

I use e-publishing a lot, but apart from the information they carry I care about them as much as I care about an mp3. Do you have a favourite mp3?

Can you recommend one of your own favourite titles?

American Psycho by Mimi Cabell and Jason Huff (2012), a book entirely composed of the Google ads that appeared on their email after they sent the entire content of Bret Easton Ellis’ novel through Gmail page by page. American Psycho is 100 percent perfect on all levels. We stopped calling ourselves ‘book-publishers’ after that. We prefer ‘counter-publishing’ or ‘relational- publishing’.