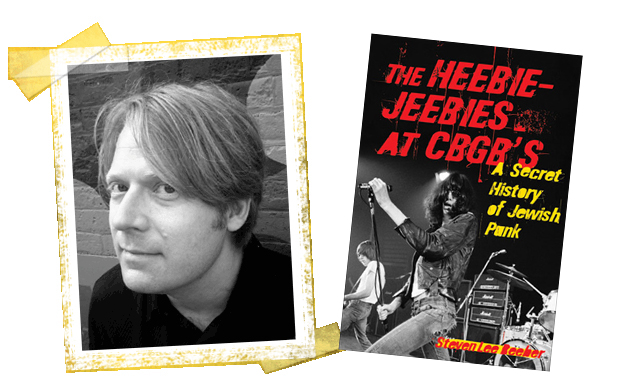 Jewish music fans know that many of their punk rock heroes were also fellow members of the Tribe, but most don’t get beyond listing them, Adam Sandler-style (“Joey Ramone! Lou Reed! Jonathan Richman!”) American author Steven Beeber and editor of Conduit Literary Magazine, went in-depth to write The Heebie-Jeebies at CBGBs: A Secret History of Jewish Punk, interviewing veterans of New York’s 1970s punk scene about their kosher-certified backgrounds.

He’ll be speaking at tonight at HAU’s Pop and the Apocalyptic conference as well as at Mitte’s Ramones Museum on May 9.

You’re attending the HAU conference about the Apocalypse in pop culture. What does that have to do with Jewish punk?

A lot of my book is looking at punk as a reaction to the Holocaust on some level. It’s just such a shocking event. There’s almost a before and after, BC/AD sort of thing. It defined Jewish character for sure, and Western culture. A lot of what I’m going to talk about is Nazi imagery in punk. It was a way of dealing with what it meant to be the victim of all of that, turning the tables. The punks were the first generation to come of age after the Holocaust. It really came into public consciousness in the late 1960s and early 1970s. A lot of those guys were impressed with Israel kicking ass in the Six-Day War – it was their chance to be the victors.

What’s this concept of “concentration camp” that you talk about in your book?

“Camp” is a way of mocking something by exaggerating it. Like, drag queens go over the top with parodies of these ideas of what it is to be feminine, making fun of that stereotype of what a woman’s supposed to be and what gender roles are [for another take on “camp”, see our interview with Bruce LaBruce] . In terms of the Jewish twist on that, at least in punk, it was a parody of that fascistic macho tough guy. And really, rock stars. Bands like Led Zepplin, with “Immigrant Song” – it was almost like Wagner.

On some level, I’m sure it was just to shock. Especially if you’re a Jewish kid – “Oh, I’ll put on a swastika, that’s pretty shocking.” But it’s also about dealing with the taboo, like, why can’t we think of it more openly? Playing with those ideas. And there was a lot of drugs and sexual experimentation in the punk scene too. If you read Please Kill Me – Danny Fields was very campy and gay, and he had a lot to do with that scene.

Right, there was one part in Please Kill Me where Danny Fields said “It wasn’t about Nazis, it was about sex.”

My assumption is that he meant fascism and Nazi ideology was very homoerotic on some level, and part of what the punks were doing – and I don’t think a lot of this was conscious – was mocking that idea of what it meant to be a man. Instead of a big, strutting rock star, you had a neurotic, sickly lead singer like Joey (Ramone).

Joey Ramone’s on the cover of your book – were the Ramones at the center of this whole phenomenon?

The Ramones are the ultimate example of all this, and – I think most people would agree – the first real punk band. [Well, actually…] Okay, yeah, but you know what I mean. People never knew, were they really this street gang of thugs, anti-intellectual, or were they concept art, making fun of the idea of being stupid? And they were obviously more clever than they let on.

Joey was weird. He looked towering, and he pumped his fist like a Nazi salute, and his kicks were kind of like goose-stepping. But everyone knew he was just a really delicate person. You could break Joey over your knee, easily. Tommy was from a family of Holocaust survivors from Hungary, he doesn’t get enough credit for what he did in that band. Johnny was kind of a thug. He was playing himself, he wasn’t so much in on the joke.

Dee Dee was the real complicated character. He was an outsider – he grew up in Germany and then came to America. His father was an American serviceman who beat him and hated Germany on some level. He was the one who “won”, and his son rebelled by collecting Nazi memorabilia, giving his dad the finger that way.

What about other Jewish punk bands who used Nazi symbols, like the Dictators?

To me they’re the Ramones without doing it correctly. They had the whole jokey, tough-guy thing, but they couldn’t get the balance right. Their big song is “The Next Big Thing”, where the chorus is: “We knocked ‘em dead in Dallas, they didn’t know we were Jews.” And Handsome Dick Manitoba had this big Jewfro, and he was a wrestler, and he did stand-up between songs, like “I don’t have to be doing this, I could be down in Florida!”

Where do you draw the line between camp appropriation of Nazi imagery and taking it seriously?

It’s an open debate. Part of the attraction to Nazi imagery is that they were unique in that fascistic glorification of violence and macho and power and strength. There was a real push and pull. As a kid, I remember thinking, “God, they look cool.” They had the leather, and the black, and they looked like nothing could hurt them. Legs McNeil said that when the Ramones played for the first time it was like the SS had just walked into the room, you know?

But what was really smart about the bands, in the beginning at least, was that they were doing it and mocking it at the same time. Later there was hardcore, which doesn’t treat any of that in a campy, ironic way. The people in hardcore really were into the whole violent, macho image of punk, embracing this thing that they weren’t at all, because they were just white kids from the suburbs that had it way too easy.

In America, with Jews, it did almost become post-ethnic. If anything, the strain that remained Jewish-identified went into the klezmer revival or the downtown music scene, with Marc Ribot, John Zorn… And then the Beastie Boys, and that part of hip hop, had a large Jewish contingent. I think that is the same spirit that informed early punk in New York.

I think black and white in America is still something that hasn’t really been dealt with. I wouldn’t be surprised if you see that become a movement in rock, dealing with like lynching. Again I don’t want to simplify that it’s just to shock. I think part of it is really dealing with this idea of “other,” and why it’s different.

I don’t want to talk too much about hip hop, but at least in terms of the early punk stuff with the Nazi imagery, it’s like the black hip hop artists reclaiming the N-word. I keep wanting to start a band called Kike, and people tell me that’s still too offensive. I’m like, all the better. Let’s do it.