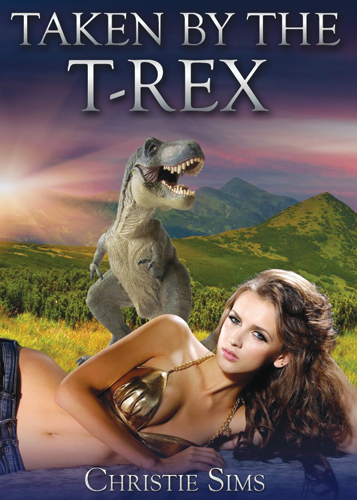 You thought the popularity of Fifty Shades of Grey lifted a corner of the veil. The success of a new e-book genre reveals what modern women really are into: having sex (preferably forcibly) with a massive, powerful, dominant male… a scaly prehistoric beast, that is.

A year ago, the internet exploded with news of Texan authors ‘Christie Sims’ and ‘Lara Branwen’ and their self-published tales of interspecies love on Amazon. Since Ravaged by the Raptor (May 2013), some 100 volumes followed, with such evocative titles as Taken by the T-Rex, In the Velociraptor’s Nest or Ravished by the Triceratops. Perfectly sexykitsch e-covers lure the reader into shorts (12-19 pages) with similar, predictable plots: following initial resistance and merciless fights between her tribe mates and a superior über-reptile, a strong heroine succumbs to the dino’s sexual prowess, discovering orgasms of gargantuan scale.

Dinosaurs aren’t the only studs in their erotica: dragons, centaurs and werewolves also pose as exciting mates and, at the rate of €2.49-2.62 per book and some 150 volumes in one year, have turned two students who met in a dormitory into bestselling authors, proving e-lit can be ravishingly lucrative. Our favourite might just be Taken By The T-Rex because we were dying to see how the authors dealt with the beast’s anatomical flaw: its disproportionately short arms. How would it manage to ‘take’ huntress Drin, who – the plot summary informs us – never found a partner to satisfy her in her own tribe? So the T-Rex descends on Drin’s village and a hunt ensues. When the angry giant predator corners the huntress in a box canyon…

“Drin screamed and cried out for the big lizard to let her go or just kill and eat her, either of which would be preferable to being torn apart by its cock. There was no response from the creature save for a gentle lowering of her body toward that massive phallus. Once she was within close proximity, she ran her hands over the beast to find it similar in touch to a crocodile, which had occasionally graced the evening meal her mother prepared. Unfortunately, the beast remained uncomfortable and unfamiliar with her anatomy and the cock tore straight through the fabric of her skirt and forced itself into her arse. At this point, she couldn’t hold back a scream. With no lubrication or warning she’d been unprepared for the invasion of her anus. The breath on her clit almost brought her to an instant orgasm. It nuzzled against her wet pussy and instinctively she ground against it, smearing her juices on its head. Its broad, thick tongue flicked out and licked her cunt. Her response to the raptor may well have saved her life.”

Sarah Khan, writer and female erotica expert, on the popularity of that hot dino-on-girl action.

Many women! Mostly women, I am sure. They like the privacy of the e-book reader and they like non-hardcore stimulation from a proper narrative – a funny romance with a sexy touch.

So Kindle allows you to be more private about your readings?

Yes… who knows what’s actually on your screen when you turn it on? Only the NSA and Google and maybe Facebook know what you really like, but not your children! I heard many stories from men about how they once sat in a train opposite a woman who was reading Fifty Shades of Grey, and how terribly uncomfortable they felt. This wouldn’t happen with a Kindle.

What’s the difference between women and men when it comes to e-erotica?

Very simple: e-erotica for women is told from a female perspective, not from a male point of view. That makes a big difference. Take a story about a woman in a train looking for a quickie: it’s about seduction and what turns her on, how she opens his trousers and what his dick looks like. There is overall a new trend of erotica for women – including the new mummy porn. It’s all about heterosexual women celebrating sex – and a very athletic sex life with many partners and surroundings… But in the end, there is ALWAYS romance and marriage with Mr. Right.

How do you explain dino porn’s current success?

After aliens and dinosaurs, what’s the future of e-erotica for women?

If I may guess: they will fuck themselves to death and return as zombies who will start a revolution, and then… at that point I would really be interested what happens next. But based on the patterns of female genre novels as I know them, even the zombies will have a nice little marriage in the end.