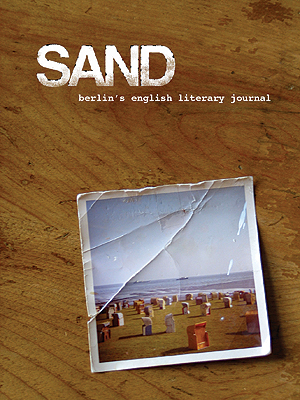 When Londoner Jason Andrews first came to Berlin in 2005, it was for the weekend. Little did he know that five years and a published novel (November) later, he’d be living here and launching an English literary magazine with a fellow Anglophone, Becky Crook.

Crook, a Seattleite who works at the Friedrichshain-based “platform for social projects” betterplace.org, met Andrews at a writing class; both were enamoured with Berlin’s literature and poetry scene. This month, they’re joining forces to launch SAND, the first local magazine of its kind since Border Crossings disappeared one-and-a-half years ago. “I want SAND to be a central watering hole,” says Crook. “To reflect on Berlin’s vibrant [literary] scene.”

Their project has created ripples of anticipation in the English literary community: it has been supported by the likes of Rob Grant, the man behind Beat Street, and Fuel hostess Lady Gaby; it has also garnered financial support (and subscriptions) from cafés, bookshops and online donors. The deadline for initial submissions was in February, but that shouldn’t stop all you Christopher Isherwood wannabes from sending in your writings: they could be included in the next issue. Crook and Andrews have invested their own savings in the project . “We’re sure we’ll make our money back,” they say enthusiastically. Even if they don’t, it’s sure to be a fun, fulfilling project.

SAND: Berlin’s English Literary Journal | Appearing biannually as of April 2010. The launch date and details about the party will be posted at sandjournal.com