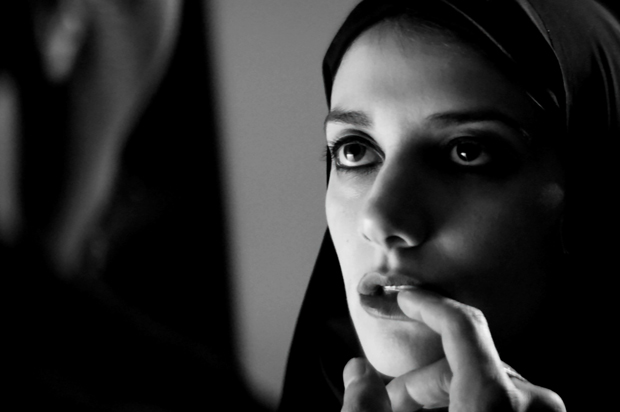 Iranian-American writer/director Ana Lily Amirpour’s feature film debut A Girl Walks Home Alone at Night was the talk of the town at the Sundance Film Festival last year. After a fruitful tour of the festival circuit, it arrives in German cinemas on April 23.

Set in the fictional town of Bad City, this black and white Persian-language film is anything but your average vampire flick. Oozing cool with its noir-ish atmospherics and post-punk soundtrack, it manages to leave a mark on even the most jaded of moviegoers.

The first “feminist Iranian vampire Western noir” is quite an eye-catching label that’s often used to describe your film. Did you set out to do a genre-bending project with all those elements in mind?

It’s funny when you have to put a definition on something, because it’s hard to do. But I guess you have to call it something for people to grab on to.

It all started with the first time I put on a chador. It was a prop from a different short film that I shot in 2009. I put it on and just felt like a bird, a bat or a stingray and it made me want to ride my skateboard. The minute I put it on I wanted to feel the wind because it had a weight to it and everything. Then I thought, “Oh, of course, this is a vampire. This is an Iranian vampire!” I couldn’t believe nobody had thought about it before. It felt so obvious.

Even on a presumably small budget, the film looks exceptionally stylish. What or who would you cite as your aesthetic inspiration?

I’m very into the anamorphic format, the vintage anamorphic lenses, as with all my favorite American movies from the 1990s and 1980s like Back to the Future and Die Hard, or also Legend and Blade Runner. Anamorphic lenses bend and distort a little bit of the sides of the frame. They flare with light and they have a soft quality to them. I find it beautiful. My next film, which I’m shooting in a few weeks, is also anamorphic. This one is going to be in colour. I love that format and I also loved the idea of doing it in black and white.

I was looking at a few films when I was thinking of the idea of this story. There’s a film called Rumble Fish by Francis Ford Coppola, And Once Upon a Time in the West by Sergio Leone. And also Wild at Heart for this kind of crazy, chaotic love story. A love story with this kinetic energy, where the world is kind of violent and hopeless around these two people who connect.

The scene where The Girl is putting on makeup at her house – it also reminded me a little of Wong Kar Wai films.

It’s funny you should say that. My director of photography, Lyle Vincent and I have a lovely collaboration. We’re very much spiritual warriors together. He’s shooting my next film in a few weeks too. He loves Wong Kar Wai. I like what he likes about it and I think it comes in a little bit, especially the patience. But Wong’s a little too patient for me. I like to mix things up, with a little bit of a laugh, energy, a bit more light-hearted fun.

It’s also hard not to notice the killer soundtrack when watching the film. Can you talk briefly about it?

I write with music. Sometimes I have the music before I even have a character. Sometimes a song would sound like a character or feel like this is what the moment should feel like or what the story is about. Every film wants different kinds of music, for that part, for that story, for that character. A film is such a ticket to adventure. It starts with something you’re fascinated by, and then it needs things, and so you get to go look for things. I knew Kiosk, which is one of the modern Iranian groups. They have a song that opens the film and closes the film. I found Radio Tehran – they’re such a lovely band. Their music is like the Persian version of The Pixies, like this sweet, nostalgic kind of rock. And then there was Daniel Brandt, who’s a German friend of mine. He’s a DJ and makes electronic music. The song that the pimp plays in the movie, this dirty, crunchy techno song, it’s from his first electronic group called The Free Electric Band. Now he’s in a group called Brandt Brauer Frick and they do electronic music with orchestra. So he was like, “Are you sure you want to put that song in the movie?” And I was like, “Yeah! It’s perfect for the pimp!”

Many of the key scenes in the movie are not very verbal. How did you make sure they remain potent/communicative?

I was born 30 percent deaf and I think I’ve always been interested in certain kinds of things. In movies where people talk too much I’d really get bored because I’d miss a lot of it. I also grew up watching a lot of Westerns with my dad. It’s funny people often bring up Jarmusch, thinking that that’s an influence, but I’ve never really liked Jarmusch’s films because the people talk a lot. I also think words often make a big thing small. And I think one of the exciting things about cinema is that it doesn’t just depend on what people say. It’s about the mood, the world, the sound design, the light, what you see and what you choose to show or not to show… There are so many things, it’s limitless, like a dream. So I think you don’t need to say too much.

Your film feels effortlessly sensual, which cannot be said of the crop of young-adult vampire movies Hollywood has churned out of late. Have you seen any of them and wherein lies the difference?

Vampires go way back. It’s one of the most juicy mythological characters. I mean, you have Bram Stoker’s Dracula, you have Nosferatu. It’s such a tool to explore so many different things and can go in so many different directions. But the Twilight movies don’t do it for me. I’ve watched the first one – it’s just different. I also think it’s hard to be sexy when you’re trying to be sexy. For me I’m very interested in tension between moments of something happening. I think all the power and chemistry happen in the anticipation of something. So holding things apart, things not being able to come together for complicated reasons… that tension makes you excited.

There’s a subversive edge to your film that might especially appeal to Berliners. Have you been to the city and what’s your impression?

Berlin is great. I love Berlin, I miss it actually. I was there for five months. That’s when I started writing this movie. I don’t know how to explain it but I really like the Germans… maybe because you guys are so bad. I have a lot of very good German friends, they’re some of my favourite people.