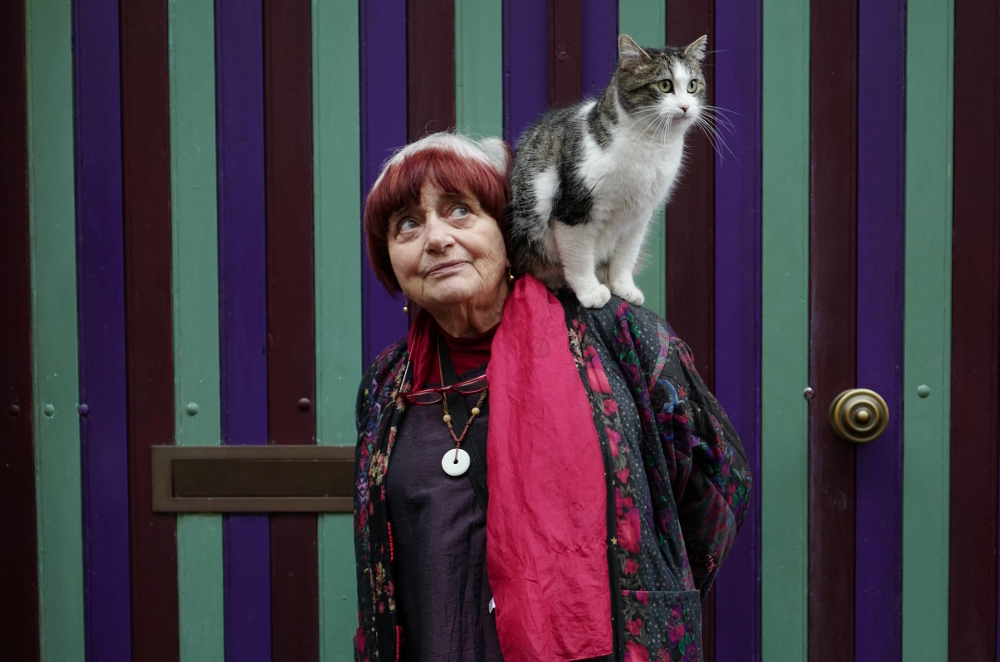 If there’s one female star reigning over global cinema, it’s the 90-year-old Agnès Varda. Filmmaking pioneer, photographer, Nouvelle Vague veteran, installation artist. A humble eccentric and quiet feminist. Last year she made a sensation at the Academy Awards dancing with Angelina Jolie onstage after receiving an Honorary Oscar, the first woman to get the accolade as a director. Last month she was on Cannes’ red carpet leading the festival’s first women’s protest, together with Cate Blanchett. And exactly one year before, she was on the same steps with street-art star JR to present their film Visages Villages, a mischievously endearing journey à deux through rural France filled with cinema vérité moments that linger with you long past the film ends.

How did you and JR meet?

After Les Plages I didn’t intend to make another film. But then my daughter suggested we meet. So one day he dropped by my place; the next day I was at his studio. It was instantaneous: we immediately hit it off and we said, “We’ve got to do something together.”

That’s typical of your way of working, right? Le hasard estmon assistant (luck is my assistant).

Not only my assistant, but also my muse! I find inspiration in the streets just from looking around me. For The Gleaners and I, I was sitting in a café looking at people picking stuff up after a market – and it struck me as great topic for a film; and I almost immediately started shooting. It was the same here, there was no plan, just a quasi-instant desire to work together.

You two make an unlikely couple: you’re tiny and a veteran of French cinema; he’s a tall street-art hipster, 55 years your junior. What attracted you to JR?

I’d seen his work – his collages but also his documentary Women Are Heroes – and, to my eyes it qualified him as a pretty feminist guy – because, as you might know, I happen to be a very feminist ‘guy’ too.

You’re both stars in your own right. Any clashes?

We laughed a lot! And also he helped me laugh about my old age. Even my declining eyesight became an opportunity for a funny sequence, when JR tries to visualise how it feels to see as badly as I do. But that playfulness is only one aspect. The rest of this film is an honest documentary about the real-life people we met in those villages.

How did you find all these amazing real-life characters?

We got lucky. Like when we ran into Cartier Bresson’s grave. We were happy because we both love his work, so we decided to film there. It wasn’t planned. But mostly we got lucky with the people we met. They were amazing. I love them all. Take Didier, the man from the factory who was retiring the next day. I found him pretty moving. I noticed him because he was all dressed up…

…and when you ask him what his plans are, he answers “How can I know, I’ve never retired before” – that’s cinema vérité for you!

Yes, people always talk a lot about ‘retirement’ – about “when”, “how much” etc. but no one realises the truth of working for 35 years in a chemical plant and suddenly having to stop. We learnt a lot, JR and I. I also loved the woman who spoke for the rights of goats to keep their horns. We remained in contact with most of them. It’s not like those “hi and bye” TV shoots. We established a real relationship with each one of these people.

It’s interesting how JR’s monumental portraits of normal people, which in many ways could stand for the narcissistic, exhibitionist culture we live in, become a social occasion once plastered on the public walls: people assemble and exchange. It’s very festive…

There is a prevalence of cameras in our lives. Don’t we live in an exhibitionist culture?

When I was young you needed a real camera to take photos. And some skills. And time. Now they’ve all become photographers. And everyone’s become a video-artist – before people would shoot one mini home-video once every century to celebrate a birth or a marriage. Now people just film everything all the time, they do because they can. It’s easy. I think people have fun with their own image more and more. Me too!

We don’t want to spoil anything, but the film ends on an uneasy note and it involves fellow New Wave director Jean-Luc Godard. Are you still friends with Godard?

It’s always been a bit of a remote friendship. Last time we met was when he was making Socialism and he wanted to use a sequence from Les Plages d’Agnes, which I let him borrow for his film… But we don’t see each other much. He’s the loner type. He chose this particular behaviour.

Yes, a copout, voilà. I sent the DVD to him. I’m sure he watched it and was amused by it, he’s got a sharp brain and a solid sense of humour. I have no problem with Jean-Luc. He’s got his life. I have mine.

Last November you were in LA to receive an Academy Honorary Award for your life’s work. Why now?

Of course, Oscars are mostly about commercial success, but inside the Academy Award jury there are some serious cinephiles and each year they pay tribute to a different kind of cinema. This year they chose me. It’s a vote – they probably thought “Who’s done good stuff and never got an award yet?” They came up with me. I was very pleased.

You’re the first female director to get one. Does this mark a new era?

Let’s not overdo it – the era of women becoming directors, producers, operators… is already upon us. Especially in France, we have a lot of female filmmakers. The problem is when it comes to recognition and power. That’s where we still need progress. Women are still not paid as much as men and don’t have the same professional prospects. I personally experimented with what we call today ‘gender parity’ a long time ago. In my film l’Une chante l’autre pas, I already had a 50/50 team.

Not so much that, but I received much love and recognition from audiences around the world. I have fans all over, from Brazil to Korea. When I go there people know me and give me a lot of affection and sympathy. I’m aware it’s a fringe minority, but everywhere people who love cinema know me. I’m the queen of the film fringe!

You’re known to be a little eccentric. When we talked seven years ago, you’d just changed your hairstyle to that bright two-colour bowl that’s become your signature look. Before that you’d showed up at Venice Biennale dressed like a potato (to match your installation). Anything since?

Yes. I went to pick up my Oscar in my pyjamas. In PJ pants and a PJ top.

Faces Places opens in Berlin cinemas on May 31. Check our OV search engine for showtimes.