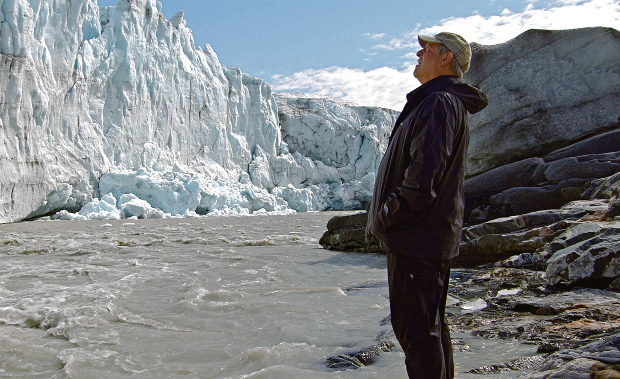 Back on the big screen on Sep 7, former US vice president and climate superstar Al Gore talks to us about his enduring commitment to the planet and why he’s not afraid of Donald Trump.

Over a decade on, Al Gore’s An Inconvenient Truth (2006) remains the unlikeliest of cinematic success stories. This unassuming documentary, adapted from a slideshow, was a substantial box office hit ($50 million worldwide), won an Oscar, ignited a global conversation about climate change, and ultimately netted its writer and protagonist a Nobel Peace Prize. An Inconvenient Sequel: Truth To Power offers a more intimate insight into Gore’s post-political career. In focusing on his behind-the-scenes role removing impediments to the Paris Agreement, the film presents the climate crisis as eminently solvable and offers genuine cause for optimism. But this was all before last year’s US election brought Donald Trump to power…

The effects of climate change are becoming ever more worrying and harder to ignore. Yet in the film, you seem optimistic…

We’re in a race against time. Every day we put 110 million tonnes of man-made global warming pollution into the sky as if it’s an open sewer. And some of it will be there for 1000 years. But if we could magically stop all man-made CO2 tomorrow, how long would it take for 50 percent of it to fall out? The answer is surprising: 20 years! We have actually got to the point where global CO2 emissions have stabilised for the last three years. And that’s fundamentally new compared to the pattern from the last 150 years.

But your country elected a climate change denialist as its new president, who immediately withdrew the US from the Paris Agreement. How big of a threat is Donald Trump to your effort to rescue the world?

There is a law of physics that sometimes also operates in politics: for every action there is an equal and opposite reaction. And I believe that the excesses and absurdities of Donald Trump have produced a very strong reaction, with progressive movements and climate activism gaining a great deal of momentum. Since his speech withdrawing the US from the Paris Agreement, even though I was worried that other countries might use that as an excuse to pull out themselves, the opposite happened. The next day, the rest of the world redoubled their commitments. Trump said he was elected to represent Pittsburgh, not Paris. But the next day, the mayor of Pittsburgh said that they were still in the Paris Agreement and announced his pledge to make Pittsburgh 100 percent renewable.

Do you think it’s possible the US will rejoin the agreement?

I wouldn’t rule out talking to Trump again. But as of now, I think it’d be a waste of time. We simply have to work around him. And the good news is that we are working around him.

I’ve had no conversations with Trump since his decision on Paris. I heard the subsequent statement he made with President Macron [“Something could happen with respect to the Paris accord”], but I would not put too much faith in that. Perhaps others can convince him where I was not able to, and I wouldn’t rule out talking to him again. But as of now, I think it’d be a waste of time. We simply have to work around him. And the good news is that we are working around him. He has isolated himself. The majority of Republican voters in the US think we should have stayed in the Paris Agreement. A plurality of Trump supporters thought we should’ve stayed in. So he’s decided to just do the bidding of the large carbon polluters who are important to him.

Who are these people supporting his climate change denial, and why are they doing it?

The truth about the climate crisis is still inconvenient for the big carbon polluters. They’ve adopted a strategy of trying to manipulate public opinion with false narratives and pseudo-scientific studies. It’s the same things the tobacco companies did decades ago. The book Merchants of Doubt, by Naomi Oreskes and Erik Conway, documents this history very thoroughly. And indeed my mentor from the 1960s, Roger Revelle, was abused by these climate deniers, who had also worked for the tobacco companies. It won’t work in the long run, but it is succeeding in confusing some people in Trump’s base. As to why climate denial has an appeal for the movement, I think that when a demagogue promises the recreation of a past that never really existed in the first place, people who are angry and aggrieved are vulnerable to latching onto that. Middle-income wages have stagnated for decades now, and I think the generalised anger at the so-called experts who promoted globalisation, coupled with the rise of inequality and a number of other problems, has left millions of people feeling that they’ve been left behind. Such people are the perfect target of “alternative facts” and “fake news”, as easily spread online.

As an early champion of the digital revolution, what do you think should be done?

I think these are growing pains for the internet revolution, and self-correcting mechanisms are now being introduced to empower people to protect themselves against fake news and false information. Some of the internet companies are aggressively looking for better ways to filter it out. It’s also worth remembering that during the first decades of the printing press revolution, there were similar abuses. For me the fundamental benefit of the internet revolution is that it makes it possible for individuals to use knowledge as a source of power, without having to pay gatekeepers enormous amounts of money. I still think that it offers the hope of reason-based discourse.

What about cinema? How big of a role have your films played in spreading your message?

Polling in many countries before and after An Inconvenient Truth’s release seems to buttress the argument that it had a big impact. In the US, for two and a half years after the first movie, there was an increase in bipartisan support for solving the climate crisis. Then in January 2009, when Obama was inaugurated and the full impact of the recession was being felt, the Koch brothers and other carbon polluters financed the launch of the Tea Party movement. And they purposely created partisan divisions on this issue. But I think people are beginning to see through that. And now we’re seeing things like the Indivisible movement, which is emerging as a progressive version of the Tea Party.

I think the more important reform is to reduce the influence of big money in American politics. Since the transition from print to television as the dominant medium of politics, the candidates in the US began to feel tremendous pressure to spend all their time raising money from special interest groups and wealthy individuals in order to buy airtime. But now the internet is displacing TV. Last year, Bernie Sanders showed that it is now possible to run a very robust campaign without taking any money from lobbyists or special interests, by simply raising money in small amounts from individuals online. I think that could be the future of American politics. It would make those who are in elected office accountable to the people and less beholden to special interests.

Does this constant battle to save the world not get exhausting?

l believe very strongly in this mission. The stakes are so high, so I’ve never considered letting up on it. And I feel optimistic. A lot of people say that they feel hopeful coming out of this movie, even with this increased sense of urgency. And it’s true – we have all the solutions now, and political will is also a renewable resource

Former vice president of the United States (1993-2001), presidential candidate and Nobel Peace Prize winner. Al Gore is best known outside of politics for his environmental activism. His 2006 Oscarwinning documentary An Inconvenient Truth has been credited with raising public awareness of global warming; this year’s follow-up, An Inconvenient Sequel: Truth to Power, follows his continued battle against climate change. He has been vegan since 2013.