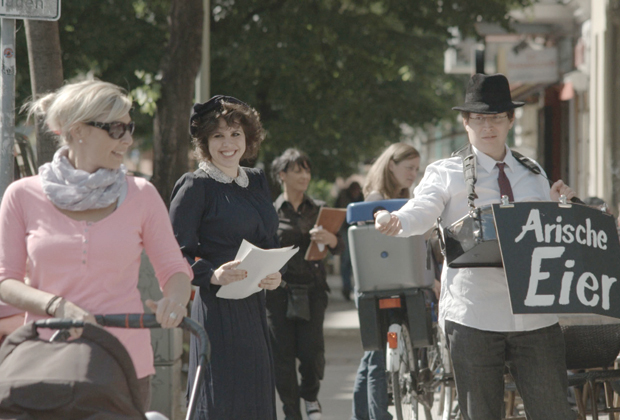 Three young Israelis confront the past in a unique way in Alice Agneskirchner’s 2014 doc An Apartment in Berlin, taking over a Prenzlauer Berg apartment formerly owned by two Jewish Berliners deported to Auschwitz, restoring it to its pre-Holocaust state and attempting to recreate the original inhabitants’ lives. The situation unleashes frank, touching and even humorous discussions and becomes a means to confront and reflect upon both Jewish and German perspectives of history. Join us for our EXBlicks presentation of An Apartment in Berlin on Tuesday, October 13, 8pm at Lichtblick Kino in cooperation with realeyz.tv.

We spoke to Agneskircher, a Munich-based writer and filmmaker, about what happens when second-generation German guilt meets third-generation Israeli Holocaust ambivalence.

What made you decide to tell this story?

I came across records and declaration of assets files in an exhibition in Potsdam. I went into archives and it struck me that I recognized these streets. So I drove to the addresses and seeing the buildings in front of me, I wanted to make a film about one of these apartments. The idea then came me to ask young Israelis who had recently moved to Berlin to redecorate and furnish the apartment as it had been.

Where did you find these particular protagonists?

Through a webpage called Israelis in Berlin. Between 2010 and 2013, I must have met up to 70 people out of hundreds who contacted me. I was surprised at how many people showed an interest.

At one point, you turn your focus on yourself and your own motivations for making the film… was that planned?

There was a moment called the ‘crisis conversation’ in the proceedings which I didn’t expect, where I became a protagonist within my film. My three subjects informed me that “my Holocaust is not your Holocaust”. The film then became an ongoing process once that conversation took place; it opened up the film, discussing contrasting opinions and how young Israelis have to deal with the memories of the Holocaust from a very young age. The film could have been called “My Holocaust Is Not Your Holocaust”, but TV stations were frightened of that title.

You refer to the Holocaust in the film as a “blind spot” – was making the a way of addressing and coming to terms with collective guilt?

It became about my feeling of guilt. Being a second-generation German [a child of parents who experienced the Nazi era] means still being ashamed and often not knowing how to deal with these feelings. It wasn’t an easy topic for me and because my three protagonists, who are third-generation Jews, addressed it, it made it easier for me. And a friendship began to form.

You say in the film that “history is disappearing behind plaster and paint”. Do you feel that Berlin has a unique relationship to its past?

Berlin, more than other cities, tends towards the new. Buildings are being renovated and the constant change in Berlin means that some people don’t think about old Jewish apartments. The film is partially about this.

The film has been presented at various Jewish film festivals around the world. How was the reaction of audiences and the Jewish community?

Very positive, and the film opened up dialogue there too. A lot of Jewish people showed an interest in understanding the point of view of young Israelis. An old American couple told me after a showing that if young Israelis could come to Berlin and have this experience, then they could now go and visit Germany. A few people were offended by the scene where one of the protagonists puts on a Nazi uniform scene: to see a Jewish person willingly putting on a Nazi uniform, even if they have a good intentions, is considered a no-go zone for some people. However, I have met many who consider it as empowering and talked to several who visit certain places and feel like they beat Hitler, saying “I made it, not you.”