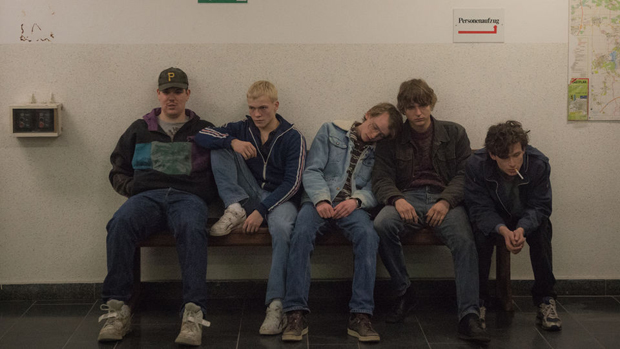 Adapting Clemens Meyer’s Leipzig-based novel for the screen, Andreas Dresen looks at the dreams of a group of young people pre- and post-Wende in Als wir träumten (As we were dreaming).

Dresen’s locus operandi has always been the grey zones that develop between people in processes of change (Night Shapes, Cloud 9, Stopped on Track). His latest film, which tackles a very literal change, is in German cinemas now after premiering in Competition at the Berlinale.

Are we just as disoriented as we were back in the early 1990s? Is that why we’re watching this film now?

Sure. I didn’t want to paint a period morality piece. Films should tell stories that are also relevant to contemporary life. What interested me about the early 1990s was the huge sense of opportunity. And what did we do with it? It’s also a film about growing up – how children turn into men and adapt, as we all do when we become adults. At some stage, the rules start to apply. So you become part of society and at some point, you start to ask whether you really lived the dreams you had. This happens to everybody, not just people who experienced those post-Wende years. But back then it was particularly noticeable – because the contrasts were so crass. And the possibilities.

Twenty years on, we can say that the rules are in place, the spoils have been divided…

It’s more difficult nowadays. If you’re young, it’s hard to get away from the saturation. It’s hard to start a revolution if everyone has enough to eat. In those days, there were plenty of buildings waiting to be torn down, spaces to be occupied, factories that were closing in which you could open a techno club. Today you need a permit.

Where you also interested in showing that there were things we didn’t understand back then?

The title “As we were dreaming” implies the past. It’s over. The narrative voice is looking back. When I look back onto my youth, I’m always a bit melancholy. It always moves me – not because we had to wear Pioneer scarves; that tended to get on my nerves back in the GDR. But because there’s this purity, this clarity to life when you’re a child. Then all the adult stuff comes along, and that’s what we’re showing. Betrayal, lies – how it all starts, how the twisting begins.

Did you feel that GDR structures like the Young Pioneers provided some kind of support?

Sure there was support. And I really wanted to make sure that the GDR didn’t look like North Korea. People often think it was all bad. And of course it was ideology. Learning those stupid poems by heart. And I took part in those crazy civil defense drills when we all had a good look at the girls who looked kind of hot in their uniforms. We ignored the stuff we didn’t like and happily absorbed the rites of passage that counted in the growing-up process. The GDR was a kind of all-embracing nanny state. It could be annoying but it could also be quite nice. I was in the cookery group at school, stuff like that. Youth clubs disappeared after the Wende: social welfare disappeared, the adults were busy with other stuff and there we were, standing in the rain. I was older when that happened but for those who were 12 or 13 and testing the limits, it was different. They discovered the world wasn’t a mere aquarium. It was an ocean. With plenty of big fish in it.

Is this a political film – in the widest sense of the word?

Let me quote Billy Wilder: if I’d wanted to send a message, I’d have become a mailman. Of course, it’s political… but everybody is free to choose what to take from the film. And everybody will have a different point of view according to their own memories, or their own personal story. I just hope that viewers feel the potential slumbering in these boys. Societies need to use and accept this unbridled energy. Young people should be asking questions, not just checking Facebook: please dream, please challenge, please provoke. It’s up to them to do it.