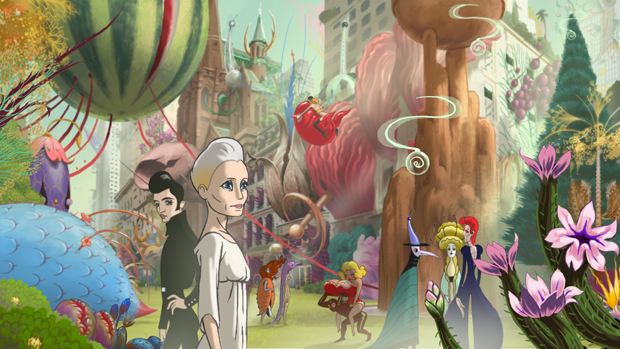 The part-animated, part-live-action film is an audacious multi-themed, mixed format exploration of parallel worlds that goes way beyond what now appears, with hindsight, as the animated comfort zone of Folman’s much-praised Waltz with Bashir.

Is the scanning process that we see Robin Wright submitting to in The Congress for real?

The first question I got asked here: “Don’t you think it’s too complex?” What a bizarre complaint!

Yes, she’s really scanned there. It’s a scanning facility in USC, owned by a private company. It’s been scanning actors for four years now. I thought I invented something, but when I came to LA to build a scanning facility, the scouters took me to that place. The technology is here. You can see it on YouTube.

But your animation has nothing to do with this?

No, it’s classic animation, hand-drawn, frame-by-frame craft that’s been around for 80 years. I shoot everything with the actors. They perform for the animators but we don’t draw over it. That would be rotoscoping. It doesn’t work.

It must have been a huge challenge to maintain unity between real life and animation.

The live action was the easier part by far. We shot in California and here in Berlin, in Dortmund and Cologne. And we shot it like any other film. I cut it, and it was ready two years ago. Then we started working on the animation and that took us two years. We had to split the work between five, six, then nine countries because of the European system of financing films: you have to spend the money where you get it. It was a nightmare, the animation part, because nothing changed after Persepolis and Bashir. In the perception of any kind of culture funding, animation is for kids.

Like in Waltz with Bashir, the film’s fulcrum is a real person. Why did you make that change in your adaptation of Lem’s novel?

Well, Lem wrote about a journalist who goes to an imaginary city to cover the futurological congress. Although I’m Polish, I didn’t grow up in a communist country. I was looking for my personal adaptation, for a different dimension. And I like the fact that Robin is playing herself, although she doesn’t believe she is. It’s challenging and I think it’s a good way to capture the audience.

You considered other actresses – how did it become Robin Wright?

I wrote a treatment for Cate Blanchett. We already had illustrations of her. But she was too perfect. When I saw Robin by chance in LA in 2009, I was immediately stunned by how beautiful, vulnerable and sad she was. This is a great role for an actress. She’s playing herself, she’s playing Agent Robin – very cool and funny and stupid at the same time. She sings a couple of songs. They don’t write too many roles for 40-plus women these days. Who could say no to this kind of script?

You’re juggling a lot of ideology – were you worried about overload?

You Germans. I was interviewed 70 times in France. No one complained that it was too much. The first question I got asked here: “Don’t you think it’s too complex?” What a bizarre complaint!

Take it as a compliment.

I don’t. Here, as the audience, you’re asked to make some transitions in your way of thinking about cinema. This is why we’re here. To try new things.