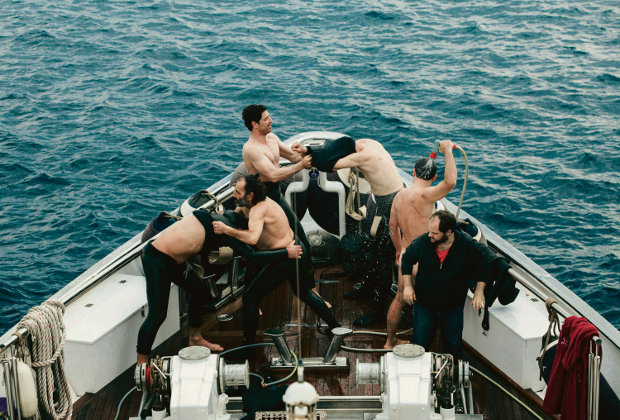 In Greek absurdist comedy Chevalier, writer/director Athina Rachel Tsangari pits six men on a boat against each other and themselves.

What starts as a game the men play to decide who’s the best of them all turns biting and insightful. The latest in a string of A-list festival hits to come from a country still struggling with recession, Tsangari’s film won the top prize at the London Film Festival last autumn.

Chevalier is a pretty conceptual film. Where did the initial idea come from?

I’d made a film called The Capsule with an all female cast. It was a Gothic vampire film based on a loose script I had written with the Polish artist Aleksandra Waliszewska, about a group of girls who were kept in an institution perched on a rock. It was fascinating to see how the personalities of the actors were informing the characters, and vice versa. So I thought it’d be interesting to try this experiment with an all male cast on a boat, as an inescapable environment. It’s also a very Greek thing to do – men going on fishing trips with their buddies for some male bonding.

This one was actually pretty scripted out. It was quite precise in terms of the game, but not so precise in terms of the characters, so the actual casting process took a while. It didn’t involve reading lines or auditions. We just had long conversations – about life in general, about their personal lives, all the while trying to create a map of the energies between them. We rehearsed for some time on the boat, and the personalities and power dynamics between the actors were what made the characters more exact.

As viewers, we never get to see the criteria with which the characters judge one another. You wrote it – did you make up the rules?

No! We decided it would be more interesting and much closer to reality for there to be no criteria. The whole idea of deciding who’s the best in general is ridiculous and impossible anyway. And the thing is, the way we judge is always very subjective. Chevalier is actually a game we all play all the time, subconsciously. We’re always evaluating others, giving each other points. And there are no rules on how we do that other than personal taste and values. In the end it’s irrelevant who even wins. It was left a bit ambiguous in the film, so that half the audience is usually not sure who actually won. The most important thing is that these men played the game, and that they were playing it more against themselves than against one another.

The film ended up making some poignant points about modern masculinity – imagine the surprise when people realise it’s directed by a woman!

I did collaborate with my cast, and I had a male co-writer as well. A lot of the stuff that rings very true was offered with great generosity by the cast. We worked together as a team, instead of them looking at me as this female director. I didn’t want this to be a woman’s film about men. We have preconceptions about what a woman’s gaze, a woman’s approach or a woman’s film is. There’s something like a dead end to that conversation. Women make cinema. That’s it.

Did Greece’s economic struggles affect the making of Chevalier?

We had a relatively easy time because we got some financing from the Greek film centre, and some from television. We also had a German co-producer who helped us out with a big part of the budget. So it was a happy combination of things. But looking forward, I’m really worried: about Greek society in general, and also about Greek cinema. Artistically and creatively it’s actually thriving, but financially it’s getting more and more difficult. There used to be a much more vital and active interest from our government, because in the context of everything, cinema is a small investment that has a huge return. We can see how Greek cinema has been a very positive ambassador for the country in the last 10 years, starting with films like Dogtooth and what’s often called the “Greek New Wave”. So it’s really infuriating to have the state being extremely oblivious, ignorant and not really giving a shit.