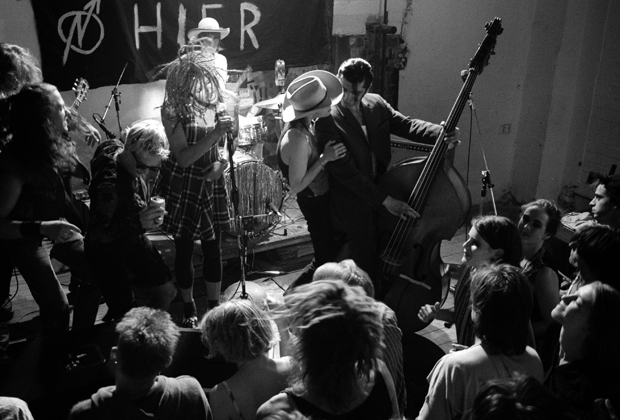 March’s EXBlicks, featuring “Trouble”, is on March 21 at 8:30pm at Lichtblick Kino.

Even though Penelope Buitenhuis’ cult classic Trouble is in black and white, the nature of the problems regarding Berlin’s influx of newcomers is anything but – at least according to the film’s leading lady and former lead singer of German punk band Jingo de Lunch, Yvonne Ducksworth. Her life in early 1990s Kreuzberg will be alive on screen (with English subs) for EXBlicks on March 21 at Lichtblick Kino. Ducksworth will stick around to field questions from the audience afterwards.

I didn’t really think much of that or what would come after it. My [then] roommate Penny (Buitenhuis) said: “Oh, I’ve got a small role in the film for you.” We always helped each other out. She did a video for my band at the time, so when she said that, I just said: “Sure, why not.” We actually filmed the whole thing during an entire month in the summer.

Is it an accurate depiction of that time and that milieu?

I definitely think it was a real snapshot of that time. There are some real shots of the street fighting that was going on back then, and a lot of people who worked on this film were very key players. Many of them were Kreuzbergers. A lot of the people who were involved – like Jürgen Brüning or Erdal Yildiz – are still active in Kreuzberg today, so that’s kind of cool. The theme about how people were fighting for their space, that’s absolutely still true to this day.

You’re not a big fan of gentrification, I take it.

I have nothing against new people coming and bringing new things into the city, I think that’s wonderful. That’s what this city is all about, you know? I do have a problem with the takeover and when people start saying: “Well we can’t have this anymore, this is way too loud.” This is just how it is and always has been. You can’t come to the middle of the city expecting it to be quiet. The buzz is part of what makes Berlin the wonderful place that it is.

Some of the people who came here maybe 10 or 20 years ago seem to think that it’s the newcomers who are ruining the city. What are your thoughts on that?

Well, nobody has more of a right to be anywhere. That’s the core of Berlin, you know. Berlin is like a mother, giving artists and people who think differently a space to breathe. Why would anyone be against that? Maybe people are scared, because there’s something new every day. I think it’s excellent – otherwise you stagnate.

What do you think about people who keep proclaiming that Berlin is over?

Basically I wish and hope that people who are able to change things will have an eye out for the culture of the city and try to preserve that as much as possible. People need to have space to do their art. They don’t want censorship and we have so many different places where we could do great things. I just hope that those places stay open for that type of free thinking. It would be crazy if Berlin had to clean up its act, you know? That’s what’s happening, it’s kind of scary. If you clean that up, you’re getting rid of what made it so attractive in the first place.

What do you expect it to be like to see the movie again?

Gee, I’m not sure actually. I was actually thinking about it the other day. “Oh yeah, I’m going to that film. What am I going to do while it’s running? Do I really want to see it?” The boyfriends I’ve had since the movie came out have all wanted to see it with me. It’s not that I have had that many… but still enough to get tired of it. You know what, I’m bringing a friend with me. A wing girl.