It’s beloved by today’s artsy expats (and Tarantino), but the Delphi theatre is just a tiny part of Weißensee’s cinematic history.

The inconspicuous exterior of the Delphi silent film hall in Weißensee hides a breathtaking relic of 1920s glamour, a tall domed theatre with concentric arches framing the screen and orchestra pit. It’s said that Julius Krost and Heinrich Zindel’s building, opened in 1929 and shuttered after World War II, is where a visiting Quentin Tarantino got the idea for Inglourious Basterds’ final scene. A few years later, another American, Brina Stinehelfer, stumbled upon the sleeping Stummfilmkino with her German husband Nikolaus Schneider, and the two decided to bring it back to life.

The theatre and its location – Caligariplatz – are one of the last reminders of Weißensee’s little-known past as Berlin’s “Little Hollywood”, the silent-era studio hub that produced over 50 films starring the likes of Marlene Dietrich, Asta Nielsen and Emil Jannings between 1913 and 1926. Most notably, Robert Wiene’s 1922 Expressionist masterpiece The Cabinet of Dr. Caligari was shot some 2km northeast of the Delphi, on a stretch of Franz-Joseph-Straße (now called Liebermannstraße). 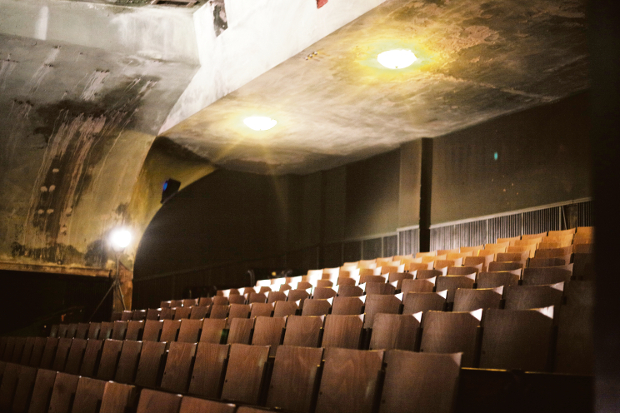 Caligari’s crooked, phantasmagorical scenery came to life in Weißensee’s first studio. The sawtooth-roofed complex, which now houses artist ateliers and workshops, was built by Jules Greenbaum in 1913. As Berlin’s film industry began to blossom, Greenbaum and his fellow producers needed space to realise their increasingly ambitious projects, and they found it in the sleepy northeastern town (which only joined greater Berlin in 1920).

With production companies came cinemas, a total of seven on Antonplatz at the southern end of Berliner Allee. Today, only the independent Kino Toni is left. Built in 1920 as Decla Lichtspiele, the modest-looking building houses two screens and a miniature exhibition.

Weißensee’s fame was not to last. As German film production became increasingly centralised, directors and stars flocked to UFA in Babelsberg, whose construction of Europe’s then-largest film studio in 1926 struck the death blow. By the time Delphi opened in 1929, Weißensee had already lost its place at the centre stage of international cinema – and the rise of “talkies” made the theatre a dinosaur just a few years later.

Despite this, Caligariplatz, the neighbourhood’s Kino hotspot, is in full bloom today. The Brotfabrik, northeast Berlin’s foremost cultural refuge featuring a cinema, a stage and more, sits right opposite the old Delphi. And under Stinehelfer and Schneider’s direction, the theatre itself has turned into a vibrant venue hosting events from pop-up operas to performance art – and the occasional silent movie.