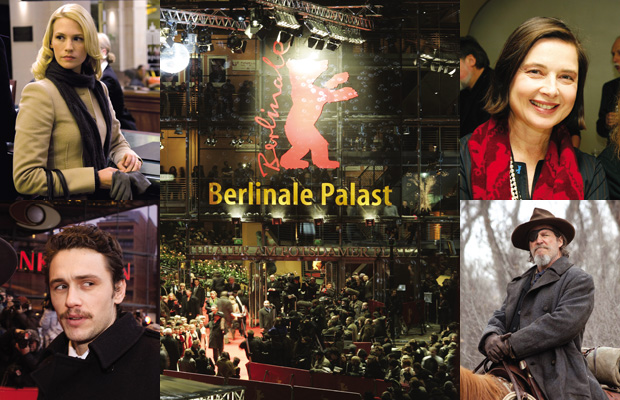 February’s finally here, which to every Berliner cinephile means only one thing: Berlinale! As Potsdamer Platz becomes a frenzy of preparation and someone’s assistant frantically polishes dozens of bear statuettes, EXBERLINER tells you everything you need to know about this year’s fest.

If the opening film is any indication, this year’s Berlinale, which runs from February 10-20, is in great shape. Those lucky enough to have seen it are already calling True Grit the best film of the year and like many of the high profile films of the competition, it has a general release right after the festival ends. The Coen Brothers can really do no wrong, and their quasi-remake of the John Wayne classic starring Jeff Bridges is bound to get enough red carpet attention without directing the glare away from the stars and starlets that crowd the Berlinale Palast on opening night.

Autograph hunters usually hang out at the back entrance of the Hyatt Hotel during the day as the stars are shuttled in and out of their press conferences, but it’s a whole lot more fun to wait for them to strut their stuff on the red carpet.

The crème de la crème of the Anglo-American indie world should gather for the screening of J.C. Chandor’s Margin Call, starring Kevin Spacey, Jeremy Irons, Demi Moore, Paul Bettany and Zachary Quinto as a group of investment bankers in the early days of the financial crisis.

A sort of German-American summit will take place over Unknown, which stars Liam Neeson and Mad Men’s ravishing January Jones and was, prominently, filmed in Berlin. Joshua Marston, whose Maria Full of Grace impressed audiences and critics alike in 2004, returns this year with The Forgiveness of Blood, and fellow American artist/director Miranda July will add her quirk-appeal to the fest when she presents her time-bending feline drama The Future.

WHO TO LOOK FOR

Rosa von Praunheim If you haven’t stood in line behind him at the CinemaxX drinks counter, you can definitely catch the Berlinale regular and mainstay of German queer cinema when he shows Die Jungs vom Bahnhof Zoo (Rent Boys) about the titular station’s hustler scene.

Sandra Hüller Your chances are doubled: Hüller has two films at the Berlinale, one the Panorama film Über uns das All and the other, where she truly shines as a woman leading a double life, Brownian Movement.

Isabella Rossellini As jury president, she’ll hardly see the light, so extra points if you can spot her.

It’s sometimes hard to explain the different sections of the festival to visitors (Competition presents films that are not actually in competition – go figure!). Panorama can only do it by replacing one hard-to-grasp term with another: “the Panorama’s mission has been to discover films for the upcoming art-house season.” So whatever art house is, the Panorama has it, and it makes a lot more sense once you jump in head-first.

From Spain comes Iciar Bollaín’s También la lluvia (Even the Rain), starring Gael García Bernal. Written by Paul Laverty, who is best known for his collaboration with Ken Loach on films such as It’s a Free World…, the film’s subject is a tricky one. The tribulations of a Spanish film crew in Bolivia trying to make a movie about a conquistador who preached against the mistreatment of the indigenous peoples are crossed with the contemporary struggles of just those peoples to have fair access to the water supply. Especially in the beginning, it can’t avoid some heavy-handedness, but it slowly finds a strong moral voice.

Strong voices are at the center of !Women Art Revolution – A Secret History, Lynn Hershman Leeson’s documentary about the development of feminist art in the US from the late 1960s to the 1980s and beyond. The film comes down a bit on the academic side, but it has great music and is highly intelligent in the way it links (art) history and (public) memory to the conditions of production.

As always, Panorama is a great place to travel the world. Try India, with the decidedly anti-Bollywood Gandu, which means ‘asshole’ and designates its protagonist as a punk. Yes, they still exist, at least in India. Or risk a trip to Putin’s Russia with Khodorkovsky by Cyril Tuschi (read our interview with Tuschi), a documentary on the oligarch-turned-political prisoner.

Whether the focus is close to home or far away, one of Panorama’s traditional strengths is (and always has been) its attention to queer issues and sensibilities. Although one of the basic conflicts in the Norwegian Fjellet (The Mountain) is one that would not happen to a heterosexual couple, it’s above all a most impressive character study, regardless of its protagonists’ sexuality.

For Nora and Solveig, a couple that has learned to make every decision based on what the other might want, breaking up is not an option as they trek to a remote mountain to learn how to go on with their life. Stunning photography (Scandinavians know above all others about the therapeutic value of looking at a snow-covered landscape) and moving emotional insights make Ole Giaever’s feature a true festival highlight.

In its 10th year as the showcase of new German films, “Perspektive Deutsches Kino” shows 11 movies, half of them reflecting the direction of Teutonic cinema: documentaries. These cover subject matter ranging from the young Hamburg based punk band 1000 Robota in a commercial music world (Utopia Ltd. by Sandra Trostel) to cow fights in an Alpine village arena (Nicolas Steiner’s Kampf der Königinnen – Battle of the Queens).

GENERATION: THE KIDS ARE ALRIGHT

There are good reasons to take a close look at Berlinale kids’ films, even if you are nominally an adult. First, most of the films tackle themes in ways that adults can equally relate to, like Andy DeEmmony does in West is West, about 15-year-old Sajid Khan’s struggle to adapt when dad takes the family back to Punjab.

And second, there is really nothing quite like the experience of sitting in a theater packed with kids laughing hysterically at a good movie – the Norwegian junior high comedy Keeper’n til Liverpool (The Liverpool Goalie) by Arild Andresen might be a good one for that.

Another highlight is the world premiere of Tim Pritchard’s documentary about South African kids preparing for the first ever Street Child World Cup, Street Kids United. Unfortunately, Michel Ocelot’s animated 3D fairytale Le contes de la nuit (Tales of the Night) will run in Competition, which isn’t officially open to an under-18 audience, but it should be lovely for kids as well – keep it in mind for after the festival.

Forum Expanded More than just films, the Forum is open for what grows at the borderline between cinema and art. Scattered around the city in venues from Arsenal to the Canadian Embassy, it will show veteran avant-gardists like James Benning (who also shows his newest feature Twenty Cigarettes in the regular Forum program) and the Berlinale’s favorite Canadian and jury member, Guy Maddin.

For the first time, it will also take to the air in cooperation with Deutschlandradio Kultur and their “Klangkunst” series. Check out the Arsenal foyer – designed this year by Canadian artist Kika Thorne – for presentations, informal conversation and drinks.

SHORTS: They often go somewhat unnoticed, but there are 25 short films competing for Bears at the Berlinale alongside features and documentaries. Two we can recommend are Antoine Bourges’ Woman Waiting, which follows a Vancouver woman who’s clearly fallen through the cracks, and Kazik Radwanski’s Green Crayons, about two little troublemakers in a preschool and the way in which their childlike sense of justice butts up against adult logic.

TALKS: Christoph Schlingensief and no end in sight: Berlin’s film and theater royalty, from writer Georg Seeßlen to director Carl Hegeman, will be discussing the life and work of the recently deceased shining light of political art.

The Talent Campus, a workshop for emerging film talent, has interesting guests whose talks are often open to the public. This year composer Michael Nyman is there, as is director Danis Tanovic, who made the brilliant No Man’s Land and will give a talk on war in the movies.