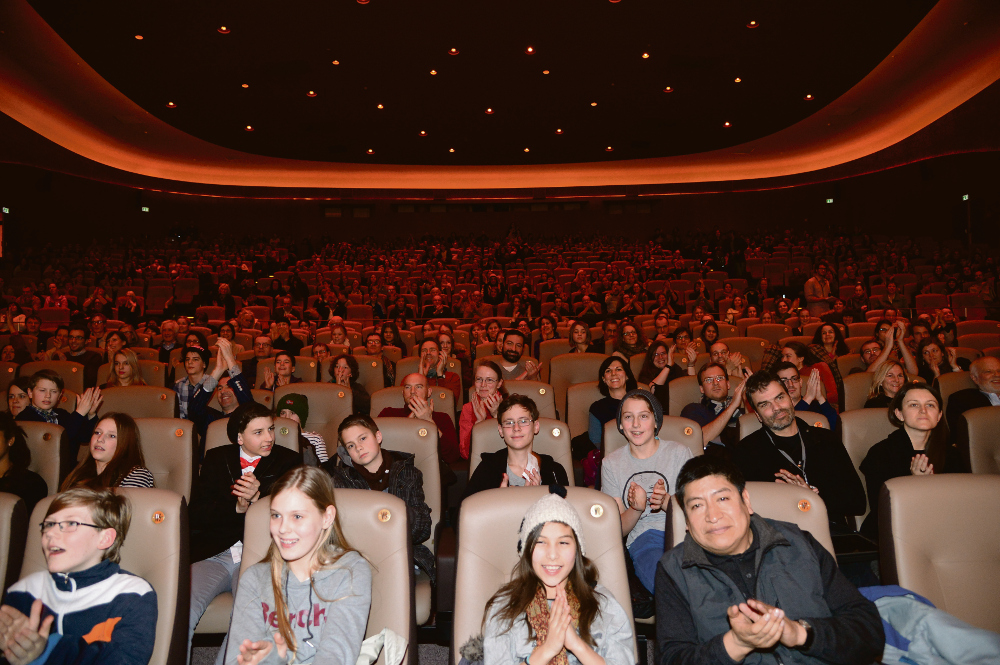 Within 10 years, Maryanne Redpath has turned the Berlinale youth section Generation into one of the most popular strands of the festival, with a gem-packed programme of screenings for audiences of all ages.

This is the Berlinale strand supposed to cater to the under-18 set while their parents watch the “serious” films. But in the 10 years since Redpath took over as section head, Generation has become a cinematic treasure trove on the radars of insiders and cinephiles. This year, 65 films from 39 countries, split into sections for younger kids (Kplus) and teens (14plus), will be vying for audience affections and the Crystal Bear award. All of them have been carefully selected by a nine-stong committee led by the New Zealand-born Redpath. And each breaks prejudices about what a “children’s film” should be in a country where dubbing and family blockbusters monopolise the youth market.

Every year, some 65,000 people attend your screenings – that’s a big chunk of the festival. Who are your audiences? Not just kids, right?

It starts with four-year-olds, but there’s no age limit! Some people have grown up with the section: they had their first cinematic experience with us when they were four. It’s a wonderful thing to be present among over 1000 small children on a Tuesday morning at HKW and witness the excitement and the atmosphere there. My experience is that when someone from the press or the industry experiences it for the first time, they’re totally blown away. And that’s the place where you start thinking about young people as an audience, not looking down on them with that judgement, “oh, it’s only for children”. It’s a great moment of recognition of the magic of cinema. It’s a wonder every year.

So, would you say that Generation films are also for grown-ups?

Yes, they are films that can make you cry, or make you laugh or make you thoughtful. That’s what good films do to you. We actually screen some films running in other sections of the Berlinale, typically Forum or Panorama. This year, for example, we have Wes Anderson’s Isle of Dogs, L’Animale by Austrian director Katharina Mückstein and Claire Simon’s Premières solitudes – all great films we can screen for young audiences.

But in Germany, it’s very segmented. There’s a huge industry catering to “families” with mediocre yet incredibly successful films like the Bibi & Tina blockbusters …

You’re completely right – I have nothing against Bibi & Tina, it’s just a film we wouldn’t programme. We’re not looking for those blockbuster-y kind of films. There are some exceptions when they’re very good, or unusual like last year’s Amelie rennt, but it’s not that they’d need us anyway. Those films have huge marketing behind them.

So how can Generation films compete with that? Catalan film Summer 1993 won both your Grand Prix and the Berlinale’s First Feature award last year, and made the shortlist of Spanish nominees for Best Foreign Language Film at the Oscars. But it hasn’t hit German cinemas yet. How come?

Why can’t they just release it as a “normal” film?

Well, their preconception is that it was in Generation, therefore it’s a “children’s film”… What needs to happen in my opinion is some intelligent marketing that would break through audience segmentation and this children’s labelling. The distribution companies have to start bending their heads around all the things we just discussed, and come up with intelligent solutions on how they can better market these kinds of films. We need something visionary on the marketing side. We’re not quite there yet. But the audience is there, and we’re proving that year after year!

Films in your programme deal with very serious, “grown up” topics – war, destruction of families, the death of a close relative, existential and physical crises. Some 14plus films are pretty violent. Are you sometimes afraid you’ll traumatise kids?

Interestingly, it’s usually the adults who come to us and say, “You cannot show that to young people, it’s traumatising.” When we ask the children, they say they totally got it and really liked the film. So there’s that sometimes misguided desire to protecting children from the evils of this world… But of course we’re very careful and value feedback from our audiences every year.

How far do you go with portrayals of sex, for example?

Kplus is more like the first kiss; 14plus the first sex. Of course it’s very individual, and it’s got a lot to do with the way it’s told. In 2016 we gave the film Las Plantas a 16-plus because of the very graphic sex. But these are only recommendations. We don’t ask for IDs; we just make sure than no nine-year-olds come to 14plus.

So are there any taboos?

Mostly sexual abuse, adult to child. Quite a few films deal with the topic, but that remains a limit we set for ourselves. I wouldn’t feel comfortable treading that territory.

Any potentially disturbing films this year?

We have a documentary in Kplus, Ceres, which I expect to trigger some discussion. It portrays the life of young people growing up on farms in Belgium, their closeness to nature and the cycle of life – which includes death, and at some point, animal slaughter. Some people will find it shocking – “Oh my god, I can’t watch that pig being slaughtered, how can you torture our children watching that?” I know it will happen, and I’m prepared for it. I’m actually really interested in the discussion.

Denmark is one of three films dealing with love, each basically showing two young people getting close to each other and discussing what love is in unexpectedly grown-up but also refreshingly touching ways. In German director Hans Weingartner’s 303, it takes three-fourths of the movie before the two kiss for the first time… before that, they explore and talk about love and relationships the whole trip from Berlin to Barcelona. And then there’s that first kiss, and it’s amazing. There’s a lot of terrible things happening in this world, and we have a lot of “shit happens” films in our programme, so I was determined this year to also show films that make you feel very good and positive.

Most films you screen during the festival are in foreign languages; there’s no dubbing, only voiceover or subtitles, mostly English ones. Isn’t that a major challenge for films aimed at young audiences?

The mantra in Germany is that for a good release for any film – not just the children’s ones – you need a synchronised version. So, of course, it’s very unusual for this country to see a hall filled with children listening to films in their original language, either with a voice-over translation or with subtitles, which they have to read. We got a lot of flak for it. But it works! No children have been traumatised by that; on the contrary. So the adults who complain about it are probably the ones who are challenged by it.

The section was renamed from Kinderfilmfest to Generation in 2006. Were you making a point by removing the word “children”?

We actually had a lot of criticism when we took away the word “children” – do you hate children now, or what? Unfortunately, when you hear that label Kinderfilm, it is loaded with prejudices and expectations; mostly that the films should “behave” appropriately with a beginning, a middle and a happy ending… Those are not the films we show. I remember when Rasmus Horskjær [of the Danish Film Institute, and a Generation juror in 2012] was once interviewed about his ideal youth film, and he said “A Clockwork Orange”!

Any particularly memorable moments from the 25 years you’ve been involved?

Years ago, I moderated my first ever Q&A for the section. We’d just screened The Life of a Young Accordion Player by Kazakhstan’s Satybaldy Narymbetov. The first question came from an adult who thought the film was totally unsuitable for a younger audience, and asked why it was being screened in the section. The eccentric director, a self-proclaimed “Casanova of Kazakhstan”, answered he had no idea why, that he’d never thought about younger audiences viewing his film and that there was no justification for this selection! I remember thinking it would be nice to be able to sink into the floor at that moment. Fortunately, we managed to change the mood by shifting the attention to questions and comments from the young (from nine years of age) and indeed appreciative audience.