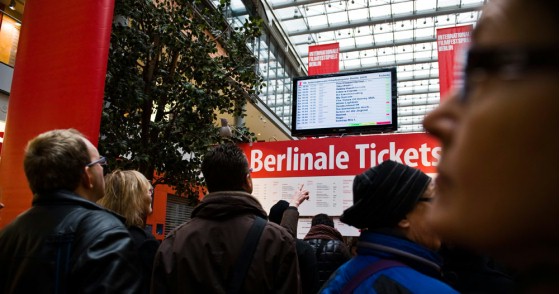 With 16 cinemas in total, most of the action is centred around Potsdamer Platz (Berlinale Palast, Cinestar, Cinemax, Arsenal), with a few other major spots, including Cubix on Alexanderplatz and the Colosseum in Prenzlauer Berg, sharing the spotlight. Don’t miss an opportunity to catch a special event at the Friedrichstadt Palast or take a peek at the freshly reopened Zoo Palast in City West, drawing back the Berlinale curtains for the first time since 2000.

What makes the Berlinale special is that it’s a big festival for normal people – right here in the middle of our metropolis. Now that you know where to go, time to jump in the fray for tickets. There’s no need for fisticuffs… as long as you know what you’re doing.

Potsdamer Platz is known to be a culinary wasteland. Your best bet is Lindner’s in the Arkaden, which offers decent wraps and sandwiches to go (we recommend the rocket-mozzarella wrap for €3). Or sit and grab yourself a hefty tuna or feta salad at Caras (€4.20) with excellent coffee to match. Dunkin’ Donuts is your next best bet – which says a lot. Keeping that in mind, maybe it’s just best to bring your lunch box!