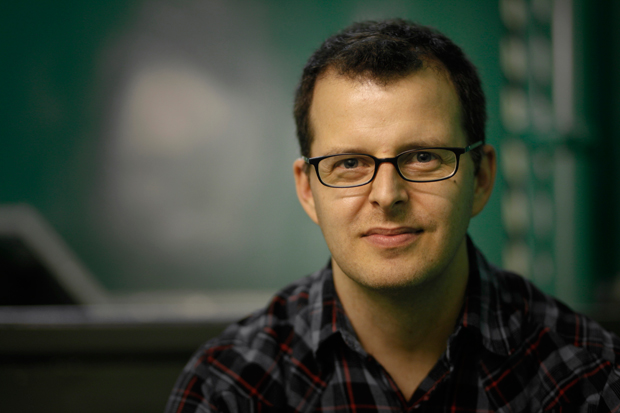 NOT for NERDS: denying expectations of a film by and for insiders, Side by Side, the project initiated by Matrix actor Keanu Reeves and directed by Chris Kenneally, is a state of the art look at state of the art moviemaking: as in movies, not films; digital, not celluloid.

Interviewing directors such as the Wachowskis, Martin Scorsese, James Cameron, David Lynch, George Lucas, Lars von Trier, Joel Schumacher, Christopher Nolan, David Fincher as well as big names in cinematography, this movie scrutinizes what we could lose and what we might gain from digital moviemaking in a measured, informed and timely look at a seminal moment in the way pictures are currently moving.

Unhappily, Berlinale showings of Side by Side are sold out. If you don’t want to miss out completely on this movie, read on for some of Chris Kenneally’s insight.

The worst thing that happened to film journalism is internet: too much data. It makes you look professional, but it’s not intelligent. Will the same thing happen to film?

I think something similar. The technology is available and inexpensive. Anyone can go out and make film, but it’s a wonderful thing: the democratization. That said, doesn’t mean everyone’s gonna make a good movie. Even with the expensive technology—a lot of bad movies were made. Good material will rise to the top.

Why pitch this film now? Are we at some kind of watershed?

I think so. Even a few years ago, shooting with a digital camera—people thought: they don’t have a budget, it’s indie, it’s artsy. Now in terms of image, and making something beautiful, people are starting to think digital can match film for image quality. Film has been the premier motion picture technology for over 100 years and it’s finally starting to turn. We wanted to capture this moment.

How was it, working with Keanu Reeves on this?

I was working with Keanu on another movie. I was post-production supervisor, he was starring in a movie called Henry’s Crime and he was producing it. He was just super curious about how the whole process worked and we had a whole series of conversations on filmmaking and moviemaking and where we’re going. He said: wouldn’t it be great if we made a documentary about this and interview the people who are at the top of the art form right now. And I said: Let’s do it. He’s been amazing. Works like no one I’ve seen before. Is very passionate. An amazing experience.

So is he a film man or a digital man?

I don’t know. We both tried to stay objective but there was one day when he said: I’m getting the feeling, Chris, that you’re more digital and I’m more film. I don’t know if that’s true. But he definitely has a deep love and appreciation of film. He’s made so many films and has been in front of the camera and worked with amazing cinematographers and directors. He appreciates the medium and craft and skill. But understands the advantages of what digital is able to do as well.

So, are you pro-digital?

I’m coming off like that in this interview. There’s a lot of good things to say about digital and it looks like that’s the way it’s going. Film is amazing technology. Can you imagine a format created today that lasts for over 100 years? Not only the technology and the mechanics, but the look of it.

But with digital, it’s all look. Film had to have some kind of relationship with what is really there and now we have things that look good to the detriment of content?

I’m not sure that’s true. You look at some of the clips we had in the beginning of the film. Beautiful faces: they’ve gauzed up the lens and set the light and put make-up on. That’s not really how someone looks. You can take things and manipulate them afterwards, but that’s been part of filmmaking—and image making—since early times.

But there was more reason behind Holbein making his sitter more attractive than what is going on now. The agenda now is different. It feels like cheating and we’re not sure why.

But some movies do have an agenda. They want the actors to look a certain way for a certain reason. Making a gritty, down-and-out film, sometimes they make the people looks worse. There’s an agenda, but it’s the agenda to the story.

Was there a sense of regret for film that we’re maybe not getting in your movie?

There were young people that loved film and were against digital, you know. The demographics really didn’t matter. Just some feeling they have inside. Even these guys who learned the craft of film, who know exactly what they are doing and what it’s gonna look like – they don’t have their head in the sand. They understand the technology and change and why it might be a good thing. Almost all of them said: it’s another tool for the job, another weapon in their arsenal.