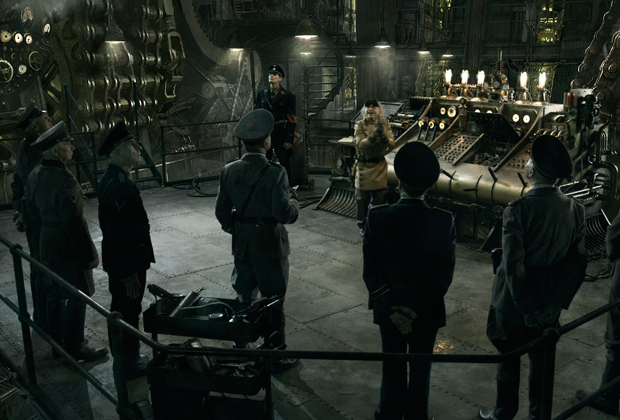 Iron Sky – the hilarious moon Nazi sci-fi comedy featuring a Blitzkrieg with space Zeppelins, lunar storm troopers, hot Aryans in uniform and a Sarah Palin lookalike as US president in the year 2018 – is certainly this year’s crowd-movie. For sure it was the crowd-pleaser at the Berlinale:  every screening has been sold out, even at the massive 800-seat Cubix theatre where we watched it. Iron Sky was also partially crowd-funded and crowd-written. So we crowd-sourced an interview with director Timo Vuorensola following the February 13 screening, where the rather cocky 32-year-old Finn got on stage to answer the Volk’s questions. Your film was partially crowd-funded, right? We put out a crowd-financing video on the internet and we were able to raise a substantial part of the budget from that internet community and that was really important for the production. Will there be a sequel and will it take place on Mars? Not yet. Do you think Nazis are sexy? And the answer is: do you? That’s dangerous, because that’s in your head. Are you advocating that Finland should arm their spaceships? Maybe I was a little too politically correct with these things…. Why didn’t the moon Nazis win the war? Their technology was very slow. Earth had better weaponry. What were the best and most difficult scenes, when making the movie. We really had fun making the fight in the UN Council… the hardest day was when we invited a lot of the fans to come to Frankfurt to do things with them. We started to shoot, it started to rain and turned into a huge snowstorm and we had to shut everything down. When was the idea for the movie born? Like all good ideas in Finland, the idea for the movie was born in the sauna. I was sitting in the sauna with a friend and he said “I had this dream and I was riding a bicycle, and there was someone on my back, saying something really angry in my ear, and I wake up and said we should make a movie about Nazis on the dark side of the moon.” We looked on the internet to see what people actually think about Nazis on the moon and it turns out there are a lot of people who believe there are Nazis on the moon. Did you tell your actors they were gonna be Nazis on the moon beforehand? I told them “We’re gonna make a film about Nazis on the moon and I would like you to be in it.” And they said, “Are you joking?” How did you end up asking Laibach to do the soundtrack? That was also in the sauna… Is there is a subliminal message of spiritual aristocracy at the end of the movie? Spiritual aristocracy? I’m not familiar with that term, so I would have to say no. But there are messages in the film. So what are the messages? One of the messages that I entertained was that the rhetoric of the 1930s and 1940s is heard again in today’s political climate. And the other political message has to do with the general political atmosphere of the world.  We haven’t come that far. Could you have made the same movie with only half of the money or only 10 percent? I made my first feature film, which was a science fiction space travel film, for €15,000, so I guess, yes, I could. But it would have been really hard and much, much slower. Did you know there is a similarity between your president in 2018 and Sarah Palin? Any similarity to Sarah Palin is completely coincidental. Who is that person again? Sarah what? When can I download it? You have to ask the producer about that!