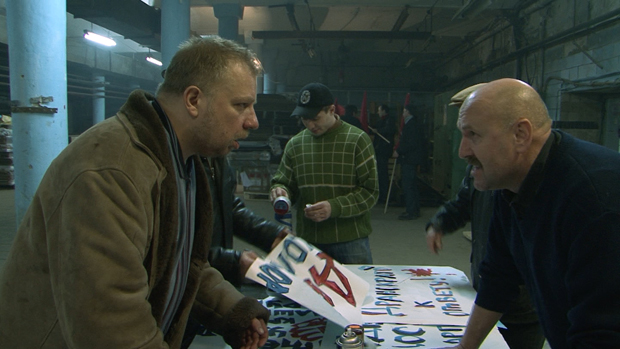 Already one of the most buzzed-about films at the Berlinale, Svetlana Baskova’s “For Marx” is receiving accolades from enthusiastic and grumbling critics alike. Preview the film with a talk with the Moscow-born director.

In 1999, the Russian government banned Baskova’s Green Elephant from general release due to its graphic depiction of violence amongst soldiers at a time when the country was embroiled in Chechnya. Now cited as an exponent of Russia’s post-communist, post-capitalist ‘New Left’, Baskova’s ideology-based aesthetics remain controversial.

For Marx deals with the birthing struggles of an independent trade union at a smelting plant – quoting not only Marxist utopias, but also Sergei Eisenstein’s 1924 Strike and films from Godard’s Marxist Dziga Vertov period.

Your film has elements of farce. Did you come across farcical situations during your research?

Today, Russia is an ongoing farce. Nothing is genuine anymore, to the point where it becomes hard to distinguish. When I showed the film to workers, they said that the factory owner was a bit grotesque and didn’t seem to be very realistic. When I showed it in Moscow to businesspeople, they said, “I don’t know about the workers, but the factory owner is definitely true to life.”

After all those years of Soviet rule, when normal people were deprived of any means of influence, and of course of responsibility, most of those who entered politics or business have been relating to it as a ‘game’ – as if they were playing the role of the businessman from their Soviet books.

For many businesspeople –and MPs – this game has turned into a constant cocaine trip, because playing constantly at the highest level is quite difficult. Intentionally, our factory owner comes across as if he always were on drugs, from his makeup to his jerky and somewhat artificial emotions. Farce runs throughout Russian life. From an artistic point of view it’s not that bad – it provides a lot of material to work with.

The last man standing survives by playing off the workers against the management. Was this a type of person/situation you actually came across?

He also takes it for a game, but survives primarily due to his cynicism. He makes it to the very end, at the price of obliterating all his feelings. Probably because he was in a demeaned position himself.

The romanticism of the 1990s is in the past now. It has been replaced by cynics, tired of playing and unable to feel anything. This becomes very clear in the so-called “Dima Yakovlev Law” [a 2013 law which bans some US citizens from entering Russia, suspends the activity of NGOs receiving any money from America and bans adoptions of Russian children by US citizens], the context and the pretext of which are well beyond any common sense.

Your hero could be a character from Dead Souls by Gogol, although he doesn’t know it. Is innocence an option in today’s Russia?

The innocence is on the other side of the ‘barricades’. The majority does not know how to live with this kind of gaming capitalism. They don’t want to play, or they can’t – because they can’t afford it. Living ‘for real’ is extremely difficult when you’re totally in the midst of this game. The main hero hesitates constantly and about everything, which is his vulnerability. This vulnerability is characteristic of the overwhelming majority of Russians. This is why we still don’t have a real opposition with a real plan and a real programme in Russia.

The film and literature quotes are like a running gag. Are they there to amuse?

They are a response to the regime of constant playing. Playing can be defeated with the appropriate references, which Soviet education provides. What is the answer to the game played by our Orthodox church? Quoting (Vissarion) Belinsky. How to respond to this new holiday on November 4 – the ‘Day of National Unity’, another element of farce? With a thought by the historian Mikhail Nikolayevich Pokrovsky: “Are we really one nation, the factory owners and we?”. Those quotations are not there to amuse. They have become our weapons.

An artist is not a political activist. He does not give any answers, he asks questions, often against his or her will. I do love my country, but I can’t make patriotic films. Just think of Gogol and the story of the second volume of Dead Souls. He wanted to write a patriotic book. But he couldn’t. So he burned everything he wrote.

This film is less about commenting than it is about questioning. If Russia recognizes itself in my work, then the question was asked the right way.