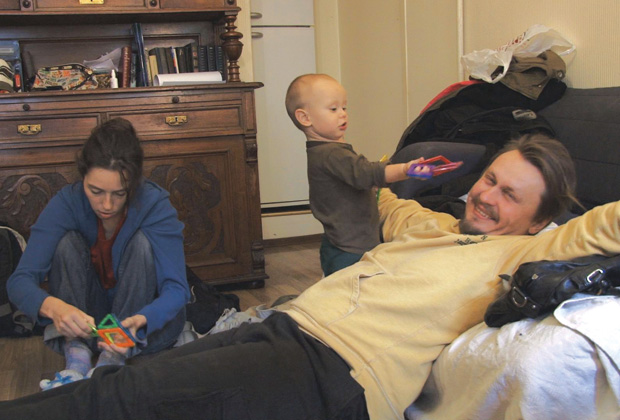 The leading trio are now the unwilling stars of a documentary, Zavtra (Tomorrow) by director Andrey Gryazev. The film’s selection in the Berlinale’s Forum section was shrouded with conspirational secrecy until the last minute; so secret in fact that its protagonists were unaware of the film’s very existence.

They have been pleading for its withdrawal, claiming it is unauthorised and contains stolen footage. Where does a director’s license end and a person’s right to their own image (the film is rather private) start – we’ll let you judge for yourselves.

While this ‘documentary’ is interesting in itself (murky production ethics aside), it obviously raises plenty of issues beyond the life of a bunch of anarchists and their political action – Gryazev will surely be grilled with questions at the film’s premier on February 15.

In a country where democracy has been confiscated by a corrupt state machine subject to the rule of one leader, radical art is a risky affair: last month Natalia Sokol, the famous Russian street activist known as ‘Koza’ (‘goat’ in Russian), gave birth in hiding to her second child. Charged with violence against a police officer, Voina’s Koza is officially a fugitive.

Online snapshots of mummy, baby and daddy, aka ‘Vor’ (the group’s ideologist Oleg Vorotnikov, wanted by Interpol), could border on bourgeois domestic bliss if it weren’t for the metre-long umbilical cord still bridging the baby’s navel and her mum’s placenta, deposited inside a blue plastic bucket that looks a lot like the one a Voina member wore on his head when he ran across a busy intersection near the Kremlin and jumped onto the roof of an intelligence service car in May 2010.

It was that ballsy, carefully choreographed slapstick performance (protesting the flashing blue lights of the VIP limousines that rule over Moscow traffic) which prompted director Gryazev to make Voina the subject of his next film.

You saw Voina member Leonid Nikolaev jump onto an FSB [Russian Federal Security Service] car with a blue bucket on his head and thought, “That’s my next film”?

Pretty much. I ran across the video by accident. I showed it to my wife and told her, “These are the main characters of my next film.” Two days later I was sitting with them and drinking beer.

How difficult was it to get in touch – they’re pretty secretive?

It was fairly easy to meet them. They weren’t as conspiratorial back then. The meeting took place in central Moscow in a café on the Arbat. There were about 40 protesters, and at first it was difficult to tell whom I was supposed to be talking to about filming. I took a walk with Oleg. All he said was: “Dude, just don’t betray us.”

Did they agree immediately?

There was a small try-out period during which they tested my reliability – was I really that director who wanted to make a film about them or an agent to spy on them?

Once you passed the test, were you granted absolute freedom or were you given limits and conditions?

I could film absolutely everything, with no limitations. There were terms though, quite a number of them. I had to film everything that the group wanted filmed, including actions and training, upload them online, etc. The most important term was that the film had to be made with no producer and absolutely no money. Living without money is the main philosophy of the group. This was a good enough price for me to realise my plan.

Obviously you have a lot of respect for the group. Do you support all their actions, unconditionally?

Yes, I like all the actions of the group, more or less. The only thing is that a few of them are filmed poorly, and others are not that well thought out in terms of art protest.

Which is your favourite one?

It was definitely the phallus on the Liteiny Bridge and the ‘Palace Coup’ [the overturning of a cop car as part of an anti-corruption protest in September 2010]. These were artistic expressions brought to their full achievement, as much in terms of formatting the ideas accessibly as in the filming and the editing. The ideas were one hundred percent realised.

Beyond the political, your film deals with the private, more intimate story of Oleg and Koza. We witness arguments: Oleg is a rather mercurial personality…

Koza is a lot wiser and more interesting than Oleg, so a lot of crises could have been easily avoided simply by talking and listening to her.

Their son, Kasper, a full-fledged member of the group, becomes a most touching protagonist of the film. What was your relationship to this two-year-old revolutionary?

With Kasper I always remained the man with the camera. He lost interest in me fairly quickly and stopped noticing me. I never tried to get closer. On the contrary, I didn’t want to break his spontaneity with the camera. When Koza once asked Kasper what my name was, being a real underground activist, he remained…mum!

Many parents would recoil in terror at the thought of such a young child being exposed to hardcore political activism, including brutality from riot police and scenes of hysteria – like when he’s snatched out of his mother’s arms and then his father is arrested, and he ends up in an orphanage’s clinic… bruised! What do you think?

It’s a very personal issue. All I can say is that I saw similar scenes in America, when the parents come to argue their civil positions with practically newborn babies in their arms.

Why did you decide to leave out the fact that Banksy bailed out Vorotnikov?

The anecdote with Banksy is perfect as a newspaper headline or on a TV programme. But in order to incorporate it into my film in a satisfactory way, I would have needed Banksy himself… And it would have been an entirely different movie.

In your film we see Vorotnikov’s lawyer’s defence argument. If you were Voina’s lawyer, what would you say in their defence?

If I were given a word, then it would be very harsh. “The government has chosen provocation, and in its desperation has absolutely no understanding of what it’s doing.” It was easier for me to express this on film, contrasting Voina’s funny and relevant actions with the disproportional reactions that the system takes against them.

Russia needs an example — be it Voina or another group – that shows that, if you are dissatisfied with something in life, you can summon up the strength to change it – entirely by yourself. And if this view matches the views of the 50,000 people that came to the Moscow demonstration in December 2011, then it says a lot about the significant changes in Russian society

Did you feel a sense of urgency making the film?

Actually it was already almost too late to make a film like this. This is why it was so important for me to have its international premiere before March 4 – the date of the presidential elections in Russia.

What do you expect to get from the film’s exposure at the Berlinale?

I just want to make the audience think about the human rights violations that are currently taking place in Russia.

Why keep this film secret for so long?

At the moment [mid-January] the Berlin premiere hasn’t been officially announced. In Russia itself no more than 15 people know about this project. And only five know about the actual film. That was a very important condition for the filming, to keep it strictly secret as long as possible.

Voina was invited to co-curate the 2012 edition of the Berlin Biennale – do you think they’ll be able to?

If they want to, they can go anywhere in the world. For such free people, it’s very easy. But I doubt that as patriots they would want to leave Russia in this critical time.

But they’re wanted by the Russian police. How do you see the future for the group’s members?

As Koza likes to say, ‘There are no ex-Voina activists – the only exit out of the group is through the crematorium’s chimney.’

If I didn’t look at the future with optimism, my film would have ended with the shot where the Omon [special forces] take Kasper away. That is exactly how reportages about war usually end on Russian TV.

What about the current political situation: has a Russia without Putin become a realistic option?

I can only repeat very famous words in Russia: no one is irreplaceable.

Does this apply to the group itself? Do you think Voina would remain relevant in a more democratic society?

It will be up to them to adapt to the changes in society, in order to continue existing as an actual and topical voice.

The name of the film is ‘Zavtra’ – so what does tomorrow hold?