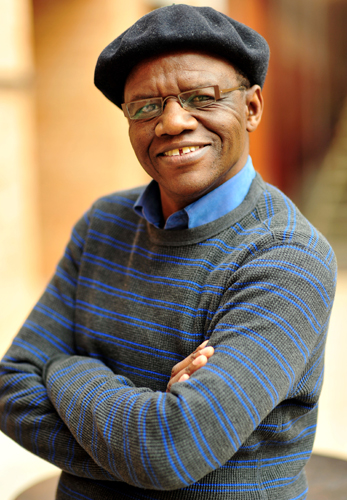 Luruli’s 2004 Crystal Bear winner “The Wooden Camera” was seen as heralding a post-Apartheid renaissance in South African filmmaking. He came back a year later as a juror. His newest feature, “Elelwani”, revisits the theme of innocence, not from the perspective of loss but gain as his titular character returns to her Venda tribe homeland, undergoing a transformative process that leads to an embrace of traditionalist values.

Your Berlinale film is…

A small film with a big ass!

What was your original trigger, the idea or encounter that sparked the desire to make your film?

I like the scene in which Elelwani is being dressed by her mother, preparing her for the wedding. The scene summarises Elelwani’s internal journey of change and transformation.

I just love to tell stories through the magic of light and shadows projected on a large screen.

I’m actually a boring person. Filmmaking is my refuge.

A good film stands the test of time.

A journalist from a major local newspaper suggested that the reason why Elewani was chosen to open the Durban International Film Festival in South Africa was simply because I was black. It is hard to describe how I felt, and still feel. Sadly, certain things are still very difficult to change in my country.

Elelwani is my first feature film on digital. I filmed in the same way I would with celluloid.

I watch old movies. I think it is a generational thing. The art of telling a story has been sacrificed for spectacle and gimmicks.

I love Berlin. I now regard it as my second home. Berlin is civilised, and true. I know I will come back home pretty inspired.