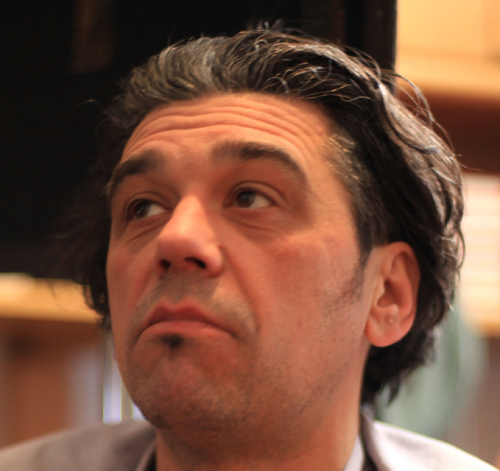 The prolific Croatian theatre director returned to his hometown of Mostar to film his second feature film, “Obrana i zaštita” (A Stranger), about a middle-aged man obligated to attend an old friend’s funeral.

Sum up your Berlinale film.

A stranger in his own (post-war) city.

The city divided in two for a long time, which I think is very well known to Berlin. I spoke with the people who live there, and with my parents, because I’m from there, and I tried to define their fears and problems.

The original title in Croatian is “Defence and Protection”. So my alternative title would be Stranac (A Stranger).

When the main character is waiting for Dragan, a man on an important political mission, and Slavko needs his help. The main character falls unconscious and creates a mess in the apartment; how to pick him up, bring into the living room, and bring him round. The scene was filmed in a single shot and is full of random errors and improvisation, and those imperfections are actually perfect.

I usually do theatre, but I make movies to demonstrate a story in time, because I think theatre is a story in space. Film presents the challenge of handling the information that you transmit to the recipient, and that game of giving and withholding information is the essence of communication.

If you didn’t make films, what would you do? Why?

I’d work in a theatre. And if I didn’t make plays, I’d make films. Once I thought of opening a café, but I definitely gave up.

An act with a great reason. The author must be so motivated to be able to say what he wants in a simple manner. I think it’s always a matter of content. If we talk about good films, I think that only good content can have good form.

Boring, but in a good way.

Among other things, that he won a prize at Berlinale…

Digital is cheaper, but also a bit disappointing in terms of image quality, but it’s also improved a lot lately.

Most irritating trend/filmmaker in current cinema?

My favourite: Amour by Michael Haneke. Least favourite: Holy Motors by Leos Carax. Although I think he is very interesting and imaginative director.

I always say that Berlin is a city in which I could live, and that’s the greatest compliment I can give to a city. I’ve been here many times, with my plays. I worked in theatres and on some projects, mostly with Matthias Lilienthal. So I always look forward to meeting with nice people.