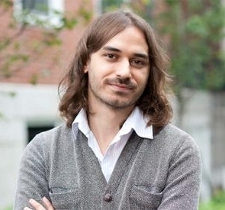 Shying away from the gruesome aesthetic and bold gestures of his Latin American contemporaries, the young Argentinian director makes intimate, talkative films about middle-class bohemian society.

Viola forms a thematic trilogy with his first two films, The Stolen Man and They All Lie, telling a set of interlocking stories using the same group of actresses.

Sum up your Berlinale film.

Make me a willow cabin at your gate/And call upon my soul within the house/Write loyal cantons of contemned love/And sing them loud even in the dead of night/Halloo your name to the reverberate hills/And make the babbling gossip of the air/Cry out ‘Olivia!’

The actresses, the crew, a theatre play we did together in 2010, my departure to New York from living in Buenos Aires: “When will I be able to shoot again!?”

I like the scene where the actresses are rehearsing and they repeat the text as if it was a magic love spell. I enjoy seeing the actresses in that resistance match while appreciating a text that may still speak to us.

I enjoy what it implies: meeting with certain friends, organising around a camera and a mic.

I would have been a mathematician.

Hard and personal. You can feel it when it is.

“I was left outside”/“Me quedé afuera”

Come and get it.

Gebo et l’ombre, by Manoel de Oliveira, Leviathan by V. Paravel and L. Castaing-Taylor, Tabu by Miguel Gomes, In Another Country by Hong Sang-Soo, San Diego Surf by Andy Warhol and Neighbouring Sounds by Kleber Mendonça Filho, among others.

What are you looking forward to during the Berlinale?

Meeting my friend Alejo F. who has been living in Berlin for a year. And also making one new good friend. But sometime it is not that a good idea to meet people. Too many things in the middle, too much awkwardness.