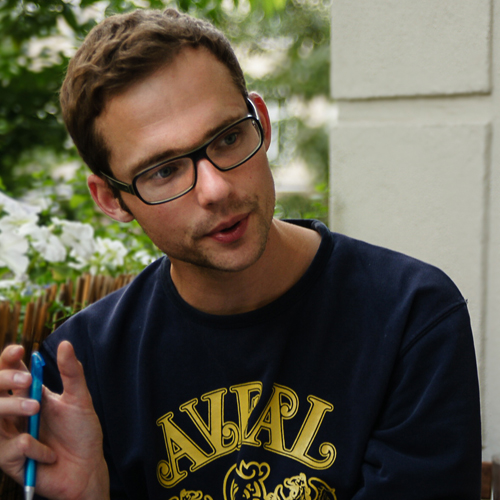 In the Swiss-born, Berlin-educated director’s hands, a family visit in a Berlin flat becomes a carefully staged chain reaction in which the absurdities of daily life are laid bare, aided by the titular “strange little cat” in Ramon Zürcher’s “Das merkwürdige Kätzchen”.

is a horror movie without any horror.

From the very beginning, the idea was to make a film that would take place mainly in an apartment and that would include leaps in time. I felt like working with a big ensemble of characters who would move through the space of an apartment in a real-time situation. I was interested in the contrast between movement and stillness. The first image that came up during development was the cat scratching incessantly at the door. The completed film also begins with this image.

I’m particularly proud of a scene in which many characters move shambolically and chaotically through the apartment’s corridor for quite a long time. They are taking the dishes from the living room to the kitchen and preparing to leave. Suddenly, a fascinating everyday-life-ballet emerges from the dynamic bustle, and it has its own beauty.

Film is the ideal medium to give a sensual form to my thoughts and emotions. To write upon a limited screen with sounds and moving images and to express my experiences and make them tangible.

Maybe I would have studied psychology or medicine, because I am interested in the behaviour of human beings as well as in the functionality of their bodies.

To me, a good film does not reduce the complexity of human beings and that doesn’t banalise life; a film that isn’t preoccupied with plot, and that surprises me once in a while.

After seeing a short film of mine, the commissioning editor said that he almost had a nervous breakdown while watching it. Maybe not that bad after all.

For this film, digitalisation enabled me to do more takes. When we started shooting, the scenes with the actors didn’t have to be rehearsed perfectly. This led to us shooting more moments that happened out of my control, which I think is a good thing. Also, it made us less afraid to work with animals and children, because we could shoot more footage. And digital image editing in post-production was easier, too.

My favourite movie from last year was Police, Adjective by Coneliu Porumboiu. This film was a real event for me, a fascinating experience. The dialogue, his use of cinematic means, the simplicity and exemplary character of the initial situation, the way he thinks about language in a cinematic way; I thought all of it was great. I was really annoyed by Once upon a Time in Anatolya.

The Strange Little Cat is my first feature film. It is my first opportunity to present a film at a big festival. This is what I’m especially happy about. I am curious to feel the excitement just before the screenings and to see how the audience will react.