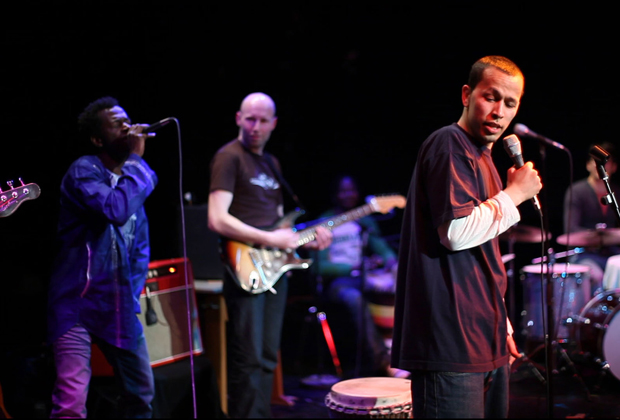 EXBlicks presents “Can’t Be Silent” on Monday, November 25 as a benefit for the refugees on O-platz.

Filmmaker Julia Oelkers takes us into the world of isolated homes fenced in by barbed wire, uncertain bureaucracy and ever present deportation threats that form everyday life for Germany’s refugees and contrasts it with the exciting stage lives of a special group of refugees that have made the stage their second home. The schizophrenic life of living between the rowdy applause of moved crowds, bright lights and having their voices heard above the rest and the bleak world of asylum seekers takes centre stage in her documentary Can’t Be Silent.

Join us Monday, November 25 at 8pm for a screening with English subs and Oelkers and guests in attendance for Q&A, and of course, drinks and refreshments. This EXBlicks will also be a special benefit for the refugee camp at O-platz.

How did the band The Refugees first come to your attention?

I knew Heinz Ratz, the musician and one of the organisers of the project, and at his concert in Berlin, one of the refugees was there – he was very shy and silent when we met him. But when he went on stage he was just exploding and had this incredibly intensity. They told me about their idea to make a CD and go on tour with other refugee musicians. So I had the idea to go on tour with them and to show them on the one hand as musicians and artists, and on the other hand show their everyday life in Germany.

What effect do you hope this film will have on the audience?

I hope that people see refugees as human beings and individuals, not just an anonymous mass of people arriving in this country. They are strangers to people and some have this negative attitude that refugees come here and take something from us. I would like people to go out of the cinema and think about the refugees in their neighbourhood or town. Who are they, where do they come from, what are their stories and their history?

In one scene a local man talks about the noise of police coming late at night to deport refugees from the centre near his house. Do you think a lot of people are still blind to the refugee centres near them or want to ignore it?

Well, the centres are very far out of the cities and towns. The refugees have no neighbours, they cannot work, and they have no money to take part in cultural life, so it is difficult to get in contact with these people. We forget that they are here, they are completely isolated, and I think that is what the government wants. It’s easier to deport a person who nobody knows, much easier than one who has colleagues and neighbours and friends.

Is music an effective way of giving a voice to the refugees?

It’s their way to express themselves. If you are not allowed to create something, and take part in society, you cannot be fully human.

It is clear at some points in the film that you had difficulties gaining access to the centres.

Yes, sometimes they didn’t let us in, sometimes they did. The problem is that when you enter you’re never alone, there are people telling you what parts and people you can film. I wasn’t interested in this controlled picture, in meeting someone in a room for two hours, expertly prepared for interviews and photos. So I stopped asking for it because I knew it wasn’t possible to shoot everyday life. We decided to stay outside. We, as German society, this is how we usually meet refugees, they are outside and we are inside, there is a distance between us.

In another scene Heinz Ratz receives a medal for his work with the refugees, and two members of the band are invited along to the ceremony at the Federal Chancellery. Yet a short time later one of these band members is threatened with deportation.

Well the projects awarded with this prize don’t get money, only this medal. A lot of projects who get this medal don’t have enough money to do their work. I think it’s something of a show for the media, but it’s nothing that can really benefit the projects.

What is the situation now like for members of the band?

Nuri has papers now and can stay legally. It is more difficult to deport them because they are really in the public eye now and have a lot of people who would support them. But it is not enough just to avoid deportation, they must also be given a future. But they have a better chance now of staying because they know people, and are out of isolation. They are in a much better situation than most refugees in Germany.