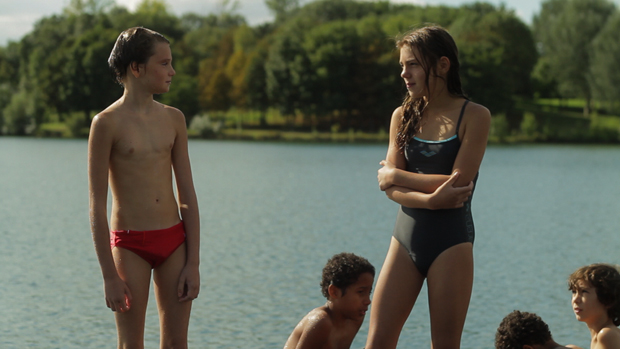 In her 2007 debut Water Lillies, French director Céline Sciamma depicted the blossoming sexual experiences of three girls during early adolescence. With her second feature Tomboy, again tackling issues of sexuality and gender, she has turned her camera to an even younger protagonist. The story of 10-year-old Laure pretending to be a boy to the world outside her home was a critical favourite when it premiered at last year’s Berlinale, where it also won the 2011 Teddy Awards’ Jury prize, and has since gone on to become an arthouse hit worldwide.

In the event of Tomboy’s German release, she talks to us about the experience of working with children and of her film’s role in the still nascent gender discourse in France. Catch the flick in Berlin cinemas while you can.

Both your films explore adult themes through very young characters. What do you feel are the advantages of this perspective?

I like coming of age stories because they’re really strong, you can really identify with the characters. It’s life but it’s kind of bigger than life, you know, it’s the first time. With Water Lilies I felt it wasn’t adult themes, it was really… the rise of desire and sexual awareness, which fit with teenage-hood. Tomboy is much more subversive in the way that it puts that matter at the moment of childhood.

But that’s what excited me about it, the fact that it offers a new perspective on that subject and also allows for talk about childhood in general. Childhood is the time of life where everybody pretends to be somebody else for an afternoon. You invent yourself, you’ve got that freedom of fiction in your life. And I think that’s why people really connected to it. In France it was a huge success, they felt they had their childhood back. I like the balance between those two subjects.

The kids’ dialogue in Tomboy all feel so authentic. What was your approach in writing the script?

There’s very little improv in the film, it’s all written. I try to write the dialogues as simple as possible, I didn’t try to mimic the way children talk. I wanted the movie to be from the point of view of a child, I didn’t want to have my adult look on things, so that’s why there’s no psychology at all. She’s not thinking about what she’s doing, she just experiences it. So it’s really written as an action movie – kids are always doing stuff. And that was also a strategy in the screenplay, thinking about the fact that I was going to direct kids.

How was the experience of directing children?

I didn’t want them to be waiting to say their lines, so they were always in action. On set, for instance they’re in the bathtub and I’m giving them toys and they are playing just freely, and I’m already shooting. Not to get improv but to get them to be in that natural feeling at the time I need them to say the line. I was shooting very long takes, never cutting, because for them it means that they have failed if you cut.

I would always talk to them and make it a non-dramatic event, to be making a film. You have to treat them like actors, have them to know their lines to be focused, to understand their character – I didn’t want to be a puppeteer – but also you have to make it fun, which actually is kind of cool, because you start believing it’s fun, though it’s your job, and it’s hard.

To what extent were the kids aware of the film’s themes?

Well, they read the script and I talked to them about how I was going to shoot every sequence. It was important for me that they know. I didn’t have big talks with them about what it means. I did talk to my main actress, of course. About the character, and about her, because she was kind of boyish in life, so we shared that.

Were they ever hesitant about playing a scene?

The kids that play in the movie, the gang of kids, they’re actually her real friends in life. They hang out, they play football every day, so it wasn’t far from what they’re living.

When they had to shoot the scene where they check if she’s a girl, of course everybody was kind of tense. But they weren’t reluctant at all and I felt that they were actually much more educated on the subject than myself when I was their age. Like, they knew the word transsexual for instance, which I didn’t know at all. “Oh, so she’s a transsexual?” “Well, you know, we can talk about it…” [Laughs] But they knew the word, little kids from the suburbs of Paris. That kind of made me optimistic actually.

And Tomboy’s been taken up in the curricula of French schools. Did you originally envisage this pedagogic potential?

No, I mean, I really wanted kids to be able to see the movie, I was really longing for their opinion actually. When the movie came out in France, parents were taking their children, I was really, really happy with that. And I’ve done screenings with kids and I was amazed at how we really connect. They had kind of the same questions as the adults, but they identify super-strongly, of course.

I remember when I was a kid there were a lot of movies with kids, there were all those Spielberg productions, a lot of movies where growing up was an adventure. Now the kids have Pixar movies and stuff, they identify with the parrot in Rio, so it was striking to see them moved by the fact that the story’s about them.

In France we’re not very open on gender studies. It’s really beginning, you know. When Tomboy was selected to go to schools, at the same time the parliament refused that the gender question was introduced in the schoolbooks. But it’s strongly political that we got there, so I’m really proud of it, actually.

Check for showtimes at our OV Search Engine.