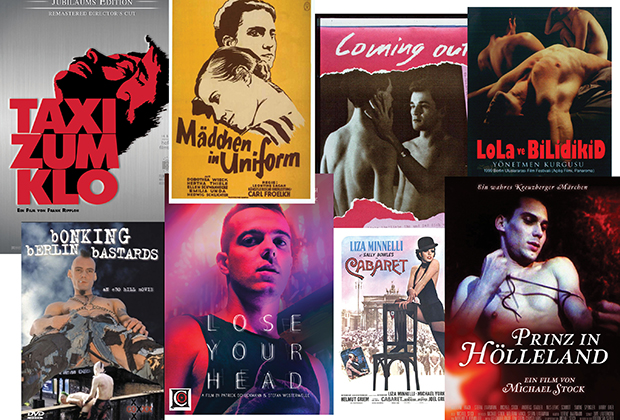 There’s nowhere better to watch the history of Europe’s LGBTQ capital unfold than on the silver screen.

Way ahead of the curve, Berlin was the city that saw the release of one of the first-ever gay films – Different from the Others in 1919. Shot by Austrian Jewish director Richard Oswald, co-written by sexologist Magnus Hirschfeld and starring Conrad Veidt, the story of a violinist who falls in love with a male student served as a blunt attack on Paragraph 175, the law outlawing sex between men in Germany, passed in 1871 and struck down only in 1994.

Germany continued to crank out films about homosexuals in a mostly sympathetic light as Berlin engaged in a pre-Nazi “Tanz auf dem Vulkan” (“dance on the volcano”), among them Danish auteur Carl Theodor-Dreyer’s Michael (1924), a silent film about a painter’s affair with his model, and Leontine Sagan’s Girls in Uniform (1931), about a young girl’s romantic love for her female teacher. 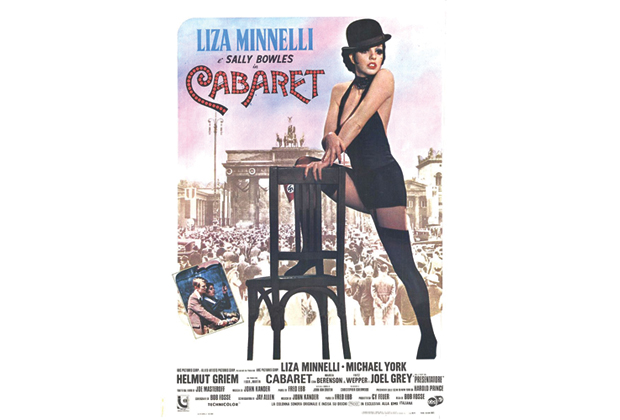 The quintessential latter-day look at the free spirit and decadence of Weimar Berlin has to be Bob Fosse’s Cabaret (1972). His brash portrayal of the exploits of Brian Roberts (a thinly veiled version of Patron Gay Saint of Expats Christopher Isherwood) and the sexually liberated Sally Bowles is practically synonymous with hedonistic Weimar Berlin in our popular imagination. Of course, Cabaret plays on the cusp of what was going on in the late 1920s/early 1930s.

In 2000 Wieland Speck and Andrea Weiss released Escape to Life: The Erika and Klaus Mann Story (named after the book that the homosexual siblings wrote together). Bohemian and intellectual royalty (their father was Thomas Mann), Speck and Weiss’s film encapsulated the end of the Weimar era and the desperate need to flee a city whose politics were swiftly changing.

Obviously there are few films about homosexuals during the Nazi era that involve an evocative image of gay ol’ Berlin, but Max Färberböck’s Aimée and Jaguar (1999), based on the true story of a passionate lesbian love affair amid the madness of war, showed that the Nazi regime wasn’t actually able to suppress homosexual desire in the Hauptstadt.

After WWII, it would take over two decades before gay politics and a celebration of a new consciousness would again make Berlin (albeit only West Berlin) a swinging capital of schwul. The late 1950s saw gay activists attempt to reform Paragraph 175, only to be denied in court – a defeat from which the gay rights movement wouldn’t recover until the law was eased (though not totally repealed) in 1969. Only two notable gay and lesbian films came out during the reign of Konrad Adenauer and his Wirtschaftswunder: 1957’s confounding Different From You and Me and a 1958 remake of Girls in Uniform. 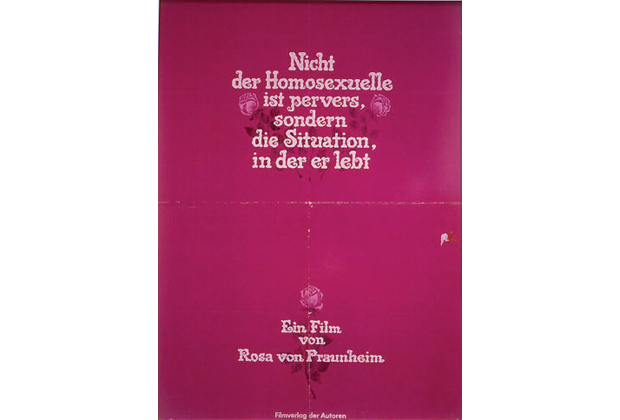 In 1972, Rosa von Praunheim burst onto the scene with his bombastically titled It Is Not the Homosexual Who Is Perverse, But the Society in Which He Lives. As famous for its campy aesthetic as it is for its criticism of the normalisation of gay life, the film demonstrated the panoply of gay experience at the time while calling for action and radicalisation. Von Praunheim would go on to direct a stream of gay classics. 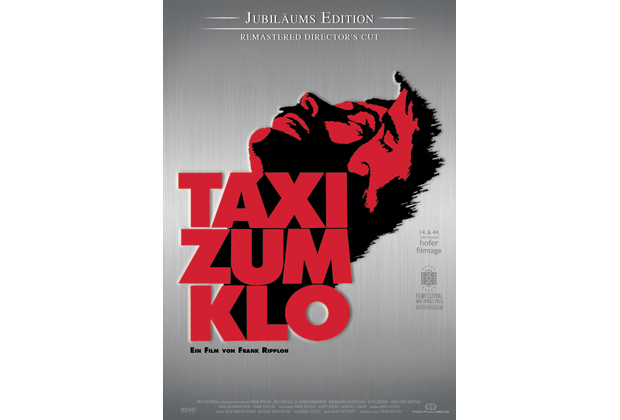 Perhaps equally important as Von Praunheim’s films was Frank Ripploh’s 1980 iconic Taxi zum Klo. Following a sexually insatiable school teacher who did his duty by day and cruised Tiergarten and other gay hotspots by night, Taxi remains notable today for its portrayal of hardcore gay sex and the sense that this is what one gets up to when in Berlin.

Ultimately, gay visibility in West Berlin film is indebted to Manfred Salzgeber, one of the actors in It Is Not the Homosexual…, who’d go on to become one of the city’s most influential cultural forces. After founding Edition Manfred Salzgeber (now Salzgeber & Co.), Berlin’s biggest gay film distributor, in 1985, he started the Berlinale’s Panorama section, devoted to arthouse films by strong auteurs, in 1986. A year later, he and his protégé Wieland Speck (now head of the Panorama) launched the Teddy, the world’s most prestigious LGBTQ film award.

Quiet on the Eastern front 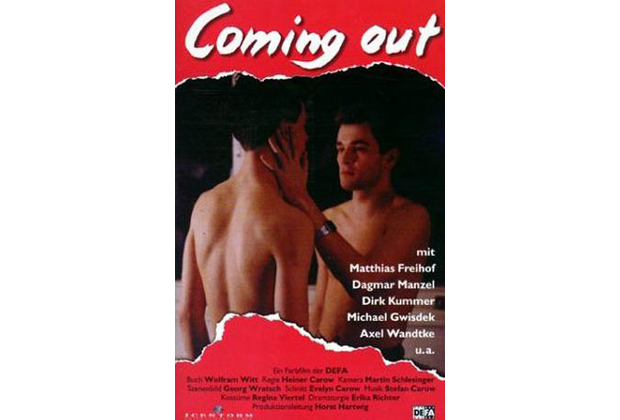 If West Berlin seemed to get more lavender, East Berlin was still a no man-on-man’s land. Speck made his 1985 Westler about a gay romance between a West and East Berliner, showing the world that the growing tension over the Wall was evident in gay Berlin as well, but it was nonetheless a West German production. Only one East Berlin film, Heiner Carow’s Coming Out, offered a socially self-conscious view of gays in the GDR, but its premiere date of November 9, 1989 immediately made it an artefact instead of a revelation.

While the GDR had in fact decriminalised homosexuality in 1968, the government still regarded gay organising as a potential political threat – and sent undercover “romeos”, Stasi agents posing as lovers, to spy on activists. By the time the GDR realised that gays were agitating for rights and not the fall of the state, it was too late.

Where are the lesbians and Turks?

If Berlin is so multicultural and LGBTQ-friendly, why are so many of the above films about white gay males? Lesbian visibility is an issue, and it’s reflected in the seeming lack of films that portray queer female life here in Berlin (Aimée and Jaguar excepted). While there seems to be no shortage of lesbian filmmakers – Ulrike Ottinger’s Ticket of No Return is very Berlin, but not explicitly lesbian – the definitive Berlin lesbian film is still missing decades on. Anna and Edith (1975), about two female colleagues who not only fall happily in love but fight for better working conditions at their company, was important for the time, but failed to capture an international audience. 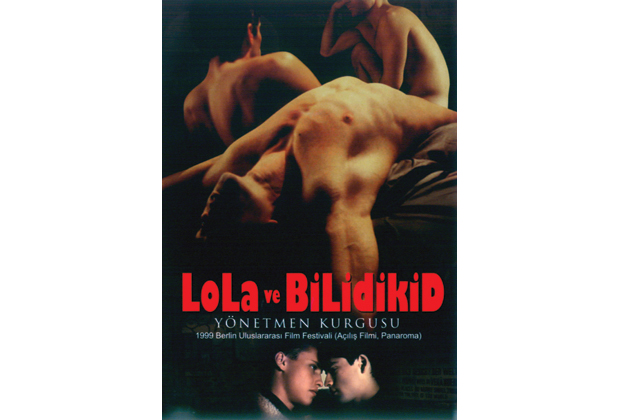 At least one film peeks into Turkish gay and queer life: 1999’s Lola and Billy the kid, set in Kreuzberg 36. Following young Murat, who is just discovering his sexuality, as he finds out he has an older “brother” who is now performing as Lola in clubs around town, Lola shows the double jeopardy that Turkish queers faced from a racist and hostile outside world and a homophobic home life. While the film is ultimately a positive portrayal of a gay Turkish experience, those who’ve been following the recent story of Nasser El-A., the young gay Turk who suffered abuse and the threat of forced marriage, might find parallels. 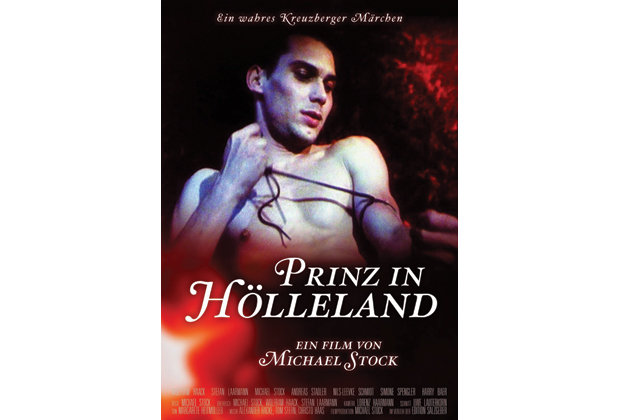 Berlin’s reputation as a gay mecca only strengthened after the fall of the Wall. In 1993, Michael Stock released Prince in Hell, a sexually explicit punk fairytale that showed reunification’s ugly side. A couple, Stefan and Jockel, live in the Adalbertstraße Wagenplatz; when they break up, Stefan looks for love and sex elsewhere while Jockel turns to heroin. 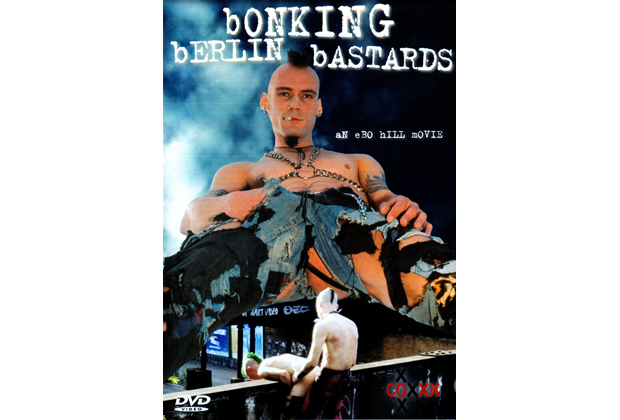 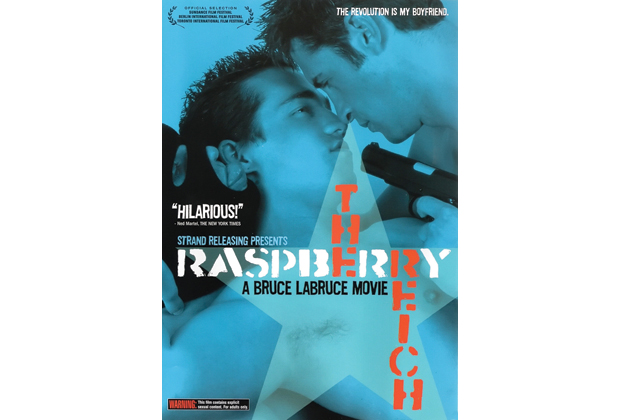 Germans weren’t the only ones diving into sexually explicit material. It wasn’t long after BBB that Brüning brought another iconic gay filmmaker, Canada’s Bruce LaBruce, here to shoot his leftwing satirical opus: 2004’s The Raspberry Reich, which follows a gang of homosexual terrorists through the streets of Berlin as they kidnap capitalists RAF-style and fuck for the revolution. 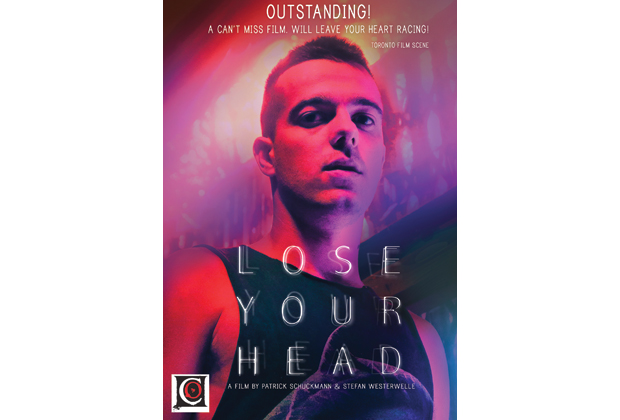 By the 2000s, Berlin was transforming into an international metropolis, gaining a status as the city where expats and tourists could make their wildest gay dreams come true – as in Jochen Hick’s 2009 The Good American, a documentary about a couple who came here to experience the wild and unbridled sex they couldn’t get in the United States. At the 2013 Berlinale, Stefan Westerwelle and Patrick Schuckmann’s Lose Your Head depicted Berlin’s newfound reputation as a destination for the gay Easyjetset via a Spaniard who comes here for one crazy weekend.

The international queer scene is now heartily represented in the annual PornFilmFestival, started in 2006. Among the features to screen there are German filmmaker Kristian Petersen’s Fucking Different films, which features all sexualities, points along the gender spectrum, body types and tastes. We’re still waiting for the one, single feature film to truly encapsulate the queer underground… but it’s only a matter of time.

The German capital’s status as a gay paradise is hardly in dispute, whether in the cinema or out on the streets. And with the city’s expanding queer diversity comes a whole new universe of cinematic possibilities.