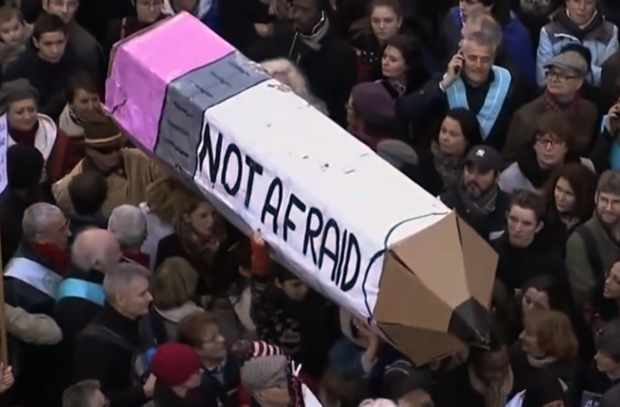 A year to the day after the Charlie Hebdo murders in Paris, Daniel and Emmanuel Leconte’s documentary and tribute Je suis Charlie comes to cinemas.

On January 7, 2015, dying for one’s freedom of expression became a reality when 11 staff members of the satirical weekly Charlie Hebdo, including its most renowned cartoonists, were gunned down in Paris for publishing caricatures of the prophet Muhammad. Using personal footage and survivor interviews, veteran TV journalist, producer and friend of the victims Daniel Leconte teamed up with his son Emmanuel to put faces and voices to a tragedy that shocked the world. Now, in the light of the November 13 Paris attacks, the film works as a chilling foreboding of events to come.

What was the motivation to make this film, so quickly after the murders of January 2015?

Emmanuel Leconte: When it happened, it felt incomprehensible, and when you knew those people it just felt impossible to accept. That couldn’t be the end of it. We had to do something. And as friends and filmmakers, this was our way to pay tribute. But it was also a way to counteract what those terrorists did: you tried to eradicate them? Silence them? We’ll give them a voice! Call their faces, their voices back to everyone’s minds and memories and bring them back! Plus, we had that all amazing material, unused footage of them telling Charlie‘s history in a way few ever knew or saw it. For me it was clear it had to be our contribution.

Daniel, most of the original footage from before the attacks came from your previous film It’s Hard Being Loved by Jerks – recounting the fierce battles that followed Charlie’s decision to republish the Muhammad cartoons from Denmark…

Daniel Leconte: Yes. Actually, my first reaction was not a film. They were my friends. So, at first, I was just totally devastated. The next reaction was a survival reflex. We got together to help survivors carry on with the next issue, as our first act of defiance against what had happened… and this was the trigger somehow, the idea of resistance. To see them bring out the next issue no matter what: I felt if they could, we could too. And as Emmanuel said, the fact that the killers left shouting, “We killed Charlie”… we couldn’t let that happen. So, yes, very soon it became the motivation for a film: make Charb and Cabu and Wolinsky live on.

Seventeen people killed by guys shouting “Allahu akbar” and you think that the topic is Islamophobia? It drives me crazy.

But I’m all the more appalled because – I had made [It’s Hard Being Loved By Jerks] in 2006-2007 and ironically, it was just coming out when the attacks took place. And looking back, we saw it was all handwritten on the wall. The Muhammad caricatures, the accusations of blasphemy, the threats… People didn’t take seriously what had happened back then. They thought it would go away after the trial that took place following the Danish caricature. They didn’t understand the danger.

Did you? What do you say to people who said that Charlie played with fire; that they were publishing ‘Islamophobic’ stuff, that somehow they were fishing for it?

DL: The trial against Charlie that took place in 2007 gave a glaring – and what should have been definitive – answer to such ridiculous statements. It actually was the opportunity for an amazingly rich and fascinating intellectual debate as we’d rarely had in France in the past. All the charges against Charlie – that it was Islamophobic and insulting to the Prophet – were proven to be bollocks. They showed that if you went through all the caricatures published by Charlie, you found tenfold more against Catholics, three times more against Jews. Religion was one of their favourite targets, but not Muslims!

So, as a lawyer told the Islam organisations that sued: “What you want is not fair treatment, what you want is special treatment.” And I think this summed it all in a bright way. The French judge cleared Charlie, even saying that by publishing the caricatures it had participated in a debate of general interest. It was a great debate. It was historical. All solved. One could have hoped it was behind us. French society had reaffirmed its secular tradition and pre-eminence of freedom of expression over religious particularism.

What happened then? How did it come to deteriorate so badly?

DL: It deteriorated very quickly. It was a matter of weeks, if not days. All societal markers started to slide – not just in France, all over. We came to a situation in which people started to oppose freedom of religion and freedom of expression as incompatible. In some countries like the US and the UK, the former became more important – which was an inversion of what we’d lived in the last 30 years, in which religion had been sent back to the private sphere. In France, secularism is an old tradition. A given.

And suddenly religion was back – not in the form of Catholicism, but Islam this time, and a fringe of radicals who wanted different rules applied to them. I witnessed all the attacks against Charlie: the fire bomb attack in 2011, the fatwa against Charb, and more and more verbal attacks from show-off intellectuals… I think Charlie ended up isolated. A bit of an outcast. So, when I heard about the attack I was devastated – first because my friends were killed, but also, it was really a defeat of the mind.

One feels a hint of bitterness creeping through the commentary in the film. Do you think the media failed at some point? Everyone rallied on January 11 in amazing solidarity after the attack, but before and since…?

DL: I’m not expecting journalists to support or show solidarity – they’re not social workers. But at some point, it’s their job to decipher what’s going on. Four million took to the street on January 11 – this was incredible! It had never happened before. As ‘historians of the present’, you’d expect the journalists to dig in, document, investigate facts. Instead, some started to go back to the good old topic of Islamophobia. Seventeen people killed by guys shouting “Allahu akbar” and you think that the topic is Islamophobia? It drives me crazy.

Two days after the Charlie shootings, Jews were the target of the terrorists, right? Four of them died…

DL: Yes! What do you call the act of attacking people in a kosher grocery store? But this inability to name it anti-Semitism – as Elizabeth Badinter says in the film, “We don’t ‘name’ it, so we don’t have to name the rest…” Fear of stigmatisation is ruling! We’re stuck between this average ‘bobo’ ideology – don’t criticise Islam – and the racist hard-right ideology of Front National, trying to use opportunity to stigmatise the Muslims. They’re feeding each other! And in both cases, they refuse to come to grips with reality.

EL: Yes, exactly. Even if there is a history of murders against Jews just because they are Jews, you can’t say that in France without being accused of Islamophobia. Even pointing to a minority, a tiny minority of Muslims, it’s a no-no. You’re automatically racist. We get trapped. Journalists got trapped. Charlie refused to be trapped, and that’s why they were an outcast.

What if you had to make this film again, one year later, in the light of the November Paris attacks?

DL: I don’t think we’d change anything. This is not a journalism doc. It’s an author’s film. We don’t mean to be neutral or show different sides and opinions; we’re standing by our point of view as friends of Charlie Hebdo‘s victims, and the emotions that come with it. I guess that our goal was to grasp that particular moment, a page of dramatic history in the making.

We made the documentary very fast: three months! And somehow this film is the result of and mirrors the chaos we lived through. We tried to organise this chaos. It was intense, and we had to work fast and without a safety net. Immodestly, we’d like this film to become a reference: when anyone wants to remember what happened between January 1 and January 14, 2015 in France, they’ll turn to our film.