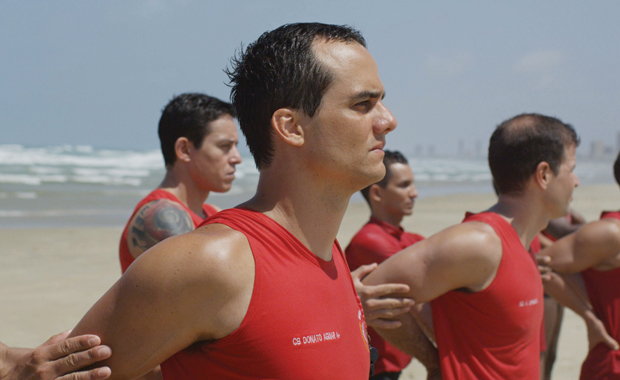 Premiered at this year’s Berlinale, the film is a genre-busting hybrid of action and melodrama about fear, loss and masculinity that tells the story of a lifeguard who develops a complex relationship with the man he rescues at the titular Brazilian beach.

As a Brazilian living in Berlin, was that the starting point for Praia do Futuro?

My relationship with Berlin started before the Wall came down. I came to the city a few times and I was fascinated with the position it had – the end station of Europe. When I left to go back to Brazil, I really missed it. I can’t tell you why I was so enamoured with the place, but I really was. The film started there from this kind of longing to be here. It was never supposed to be a film that took place between my hometown and this place, but as I started to work on the script it kind of made sense.

So where did the idea for the story come from?

Before I started thinking of stories and characters and even the place, what was important for me was making a movie about people taking risks and what’s involved in that – the fear, being brave. There was this wave of fear which was kind of everywhere – in Europe, in the Middle East, even in America. So the first image that came to my mind was of this guy looking at the horizon, imagining what was on the other side.

And hence the diving metaphor?

I wanted to have a movie where death was not the end of something but the beginning. I think that death and drowning was something interesting to me as a way of re-emerging, taking a breath and moving on. Here I wanted to do something with stronger colours, more dramatic; the idea of diving as a way of going someplace to become something else.

Was this the kind of feeling you were hoping to create?

I wanted the film to have a slideshow feeling, like a collection of moments. There is definitely a feeling that you’ve missed something between one image and another. The film was shot on 35mm and it was really important to have that, I think. I wanted the code of adventure films: these saturated colours, full-on blues, reds and yellows. That’s pretty much the primary palette of the film. Even if Berlin is grey, the colour is still there.

Is it a coincidence that all of your main characters are men?

I really wanted to make a movie with male characters. This idea of action, of adventure, of this human hero and a few elements of masculinity but more than that, of male fetishism – the speed, the machine, the danger, the adventure and death – all that was something I wanted to dive into. The movie comes from not only this wish to flirt with action films without being an action film, but also to do a movie that was not afraid to be sentimental. Donato, he’s a hero but he’s also a coward, and I thought it would be more potent to talk about that within a male context, more dramatic to have this character who is willing to risk his life for someone else, but is unable to be true to himself.

How does the gay storyline fit into this idea of fear and courage?

In the 1990s with the AIDS epidemic, I had so many friends who left Brazil to go somewhere where they wouldn’t be so discriminated against, and they just died and disappeared. The fact that the character was gay was something that I wanted to explore. There’s something quite beautiful about the courage it took to leave his life behind. But also the question of fear and this idea of hiding. Berlin is an interesting place for doing that too because it’s kind of a tabula rasa, a place where you can reinvent yourself, like the city has done for itself.

Praia do Futuro opens in Berlin cinemas on October 2. Check our OV search engine for showtimes.