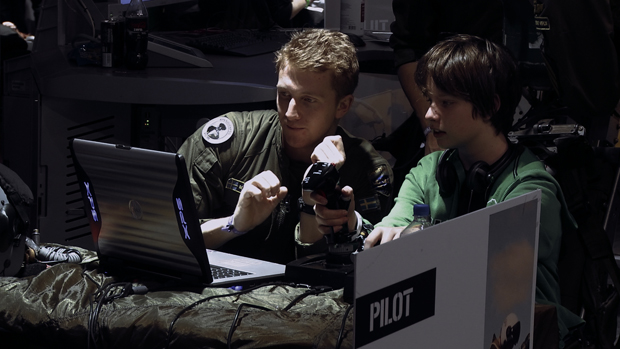 This weekend (April 17-18), Berlin’s already bursting-at-the-seams hacktivist scene receives another jolt of disruption with the opening of Tatiana Bazzichelli’s Disruption Network Lab. Their event Drones: Eyes from a Distance investigates drone use, with discussions between expert researchers, investigative journalists and activists. Also present for a press conference on April 18 will be Brandon Bryant, former US Military drone operator turned activist and one of the key players in Norwegian director Tonje Hessen Schei’s documentary Drone, which will finish off the weekend.

Drone technology is constantly improving, and the use of these unmanned aircrafts for unseen surveillance and covert killings is on the rise. The CIA in particular has been using drones to kill people abroad – especially in Pakistan – for years. Drone focuses on the efforts of many activists, lawyers and victims to end the Pakistani drone strikes, which have been estimated to kill almost 4000 people, many of them civilians and children, since 2004. Moving seamlessly between experts in Europe, drone operators in states like Nevada and Montana and victims of drone strikes in rural Pakistan, Schei’s film offers an incisive, global look at the CIA’s drone war.

Schei, accompanied by Bryant, will hold a discussion about the film after the screening. See it at Kunstquartier Bethanien on Saturday, April 18.

How did you come up with the idea for this film?

I got the idea for the film when I was working on my previous film, Play Again, which looks at how kids in the States are growing up behind screens and spending more time in a virtual world. I came across the story of a gamer who dropped out of high school, because of his gaming, and joined the military. He was quickly chosen to be a drone pilot because of his skills, and when he was 19 he was an instructor for other drone pilots. The thought of kids going from points per kill to actually killing real people on the other side of the world terrified me.

This was before Obama started ramping up the drone strikes. When he did that I was really shocked. He went from the promise to close down Guantanamo, and end torture and detainment, to simply killing suspects with their families and neighbours. And the rest of the world is being really quiet about this, and not reacting to it. So that’s the thought process behind this production.

The name Drone conjures up so many things, because drones have so many possible uses. Why did you choose to focus only on military drones rather than the other uses of the technology?

Personally, I think that the CIA’s use of drones is one of the biggest challenges that we are facing in terms of warfare today – where you basically assassinate people outside of declared war zones, with a new technology that allows you to do this from a distance and not put your own people at risk. It removes sacrifice on the killers’ side. At least, physical sacrifice. What we’ve seen in the film is that the psychological sacrifice, for the drone pilots, can be devastating.

What would you like to see done to address the problems surrounding drone warfare?

First of all, we have to inform the public and our politicians and demand accountability and transparency from the US. Because I think it’s very important for us now to realise what it means when the US is setting this kind of standard for warfare – especially when this technology is spreading and developing so incredibly fast. When we started this production, it was just a handful of countries that were interested in this technology, and today 100 countries either have, or are developing, military drones. So it’s going to be incredibly hard for us to point our fingers at, you know, Russia, China or Iran, when they start assassinating people around the world that they see as threats to their safety. What this technology is allowing for is a global warfare, where the whole world becomes a battlefield.

Another issue often brought up with drones is the possibility of total surveillance. Do you see that as a concern?

I don’t really trust the people in power to control all the information out there in the best possible way. And I think that protecting our privacy is incredibly important these days. I don’t know if it’s possible. Through Snowden and his discoveries, we’re becoming more and more aware of these issues, and trying to figure out how to deal with them. We’ve talked to people who actually think that surveillance is a good thing, because then people will start to behave. I spent a lot of time in London these last few days, and having cameras all around just feels… [laughs] You definitely become more self-aware on some kind of level.

Exactly. And who’s watching you, and why? What kind of control do they have, and how will they use it? These are the new kind of questions we have to relate to on a daily basis.

Still, as you said earlier, drones can have positive uses too.

Absolutely. I think there are a lot of great benefits to this technology. Drones could be used in warfare to ensure that human rights are respected, and that there are no war crimes unfolding. They could also be used to support ground troops. Not to mention environmental uses… Of course, there are so many possibilities with this technology. But as soon as you start weaponising it and arming it and using it to kill, it reaches a new level of ethical and moral and legal questions that we are not really asking so far.

It’s very important to get this debate going in Europe. I don’t think a lot of people are aware of how silent Europe really is on this issue, and the consequences of our silence. It’s making us responsible. I think that we’re starting to see a backfire of our role in the war on terror more and more in Europe right now. And I think it’s important to deconstruct the notion that the drones are the perfect weapons in the war on terror. They are not as precise as is being sold to us by the US. I also don’t think people are really aware of how many civilians have been killed in the drone war. Drones have changed warfare, and possibly our future, and we hope Drone can fire up a debate on these important issues.