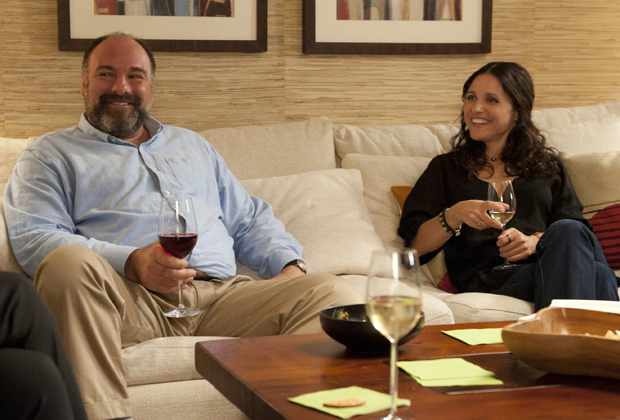 WIth a formidable trio of female acting moxie that guarantees pretty much permanent on-screen excellence (Golden-Globe nominated Julia Louis-Dreyfus, Catherine Keener and Toni Collette) plus a wonderful James Gandolfini in his penultimate role, Enough Said is the stuff of cougar dreams – and nightmares. Exberliner talked to Holofcener about engaging with love at a time of life when things tend to point south rather than north.

With Louis-Dreyfus and Gandolfini, you had two actors defined by long-time TV personas (Elaine/Seinfeld and Tony/Sopranos). Did you feel you were working against or with these reputations?

Definitely against. But I didn’t have to do much. Mostly, I was anxious before we started, thinking: what have I done? Is anyone going to forget that Tony’s dating Elaine? They may never forget. So I kind of let it go. Because it was completely out of my control. I cast two actors that I wanted and hoped to God it would work. And once we started working, I didn’t have to deal with it: they were so different from their prior characters. Occasionally I would see Julia do some very Elaine mannerism. I don’t think I told her. I just knew I’d have to cut it out. Simple things, like slamming her hand against the table. And there were a couple of times Jim looked a little murderous and we had to cut around it – but that’s just his face. It’s not even Tony Soprano. What can you do?

When you write a screenplay, what’s on your mind: genre, realism – or something completely different?

I start the screenplay with character. Usually with who I want to follow around for an hour-and-a-half. And from there, I start thinking about the things that are in my mind at the time, and in my life. I’m open to anything (during filming) but it’s not gonna change anything like genre.

So if anything occurs to you during filming, you’re happy to run with it?

Oh always. Sometimes I can’t even remember what I was originally thinking because once you get good actors and a good DP and a location that you’ve either never seen or didn’t really plan on: like the room is much smaller than I imagined whilst writing. Everything changes basically.

It can be scary, sometimes. If someone has a great idea, you gotta try it. It doesn’t happen very often though. Especially for this movie, the script was pretty tight.

The comedy in Enough Said is both deliberately involuntary – and deliberate: the characters play the comedic potential of their relationship then you edit for more comedy. How aware are you of those layers?

Probably pretty unaware. Although I like how you put it. I guess it’s just the way I write: and since it’s already written that way, I try to get the actors to make it their own but basically I want to hear it as I’ve written it. Sometimes, they make it funnier.

You’ve often worked with Catherine Keener. What drew you to Toni Collette as the third woman?

Well, she’s hilarious, smart, funny. We had a meal once and really hit it off. She was available and interested and I hadn’t worked with her before. All those things made me want to ask her to be in it.

Keener is the creative poetess element, Louis-Dreyfus the masseuse, a physical side. Does Collette, playing an analyst, incorporate a controlling mechanism: the third side to the triangle?

That’s interesting. The voice of reason versus intuition? I can see how that worked out well but it wasn’t planned. And Collette may be the voice of reason, but she has her own issues. It’s easier for her to see someone else’s problems than her own. The triangle idea is interesting – but beyond me. I swear to God, I’m a smart person, but I write intuitively. Later on I look at things and think: “Oh yeah, that’s so interesting,” or “This is about a part of my life that I forgot.” I don’t start with those things.

When you think about the physicality of your female leads, is it all mapped out? The way they dress, the way they do their hair?

Very much so. But it’s usually a struggle because I want them to look terrible…

… isn’t that a bit of a challenge with these actresses?

I know. I can’t make them look terrible. It’s too cruel. And no studio is going to want that. I guess I always aspire to the way Mike Leigh’s actors look in his movies. That can’t happen here. So, there’s a compromise. I get actors who are willing to look normal. Julia’s beautiful but she’s not wearing a lot of make-up. She often wears very simple, schleppy clothes. It is really important to me. I’ll go into the make-up trailer and see lip-liner on someone who’s waking up in the morning and say: “No, no! That’s not happening.” Rooms too. I throw tissues around, I throw socks around. Things like that. Where they live is a very important part of their characters.

A couple of comments on working with James Gandolfini?

It was great, and challenging. He was very sweet and very hardworking. And could be very serious and very goofy. Challenging. He took his job really seriously. He asked me a lot of questions, questioned my choices. Ultimately, I could do anything I wanted but it had to make sense for him. I don’t know. He seemed like a really wonderful person. It’s a loss.